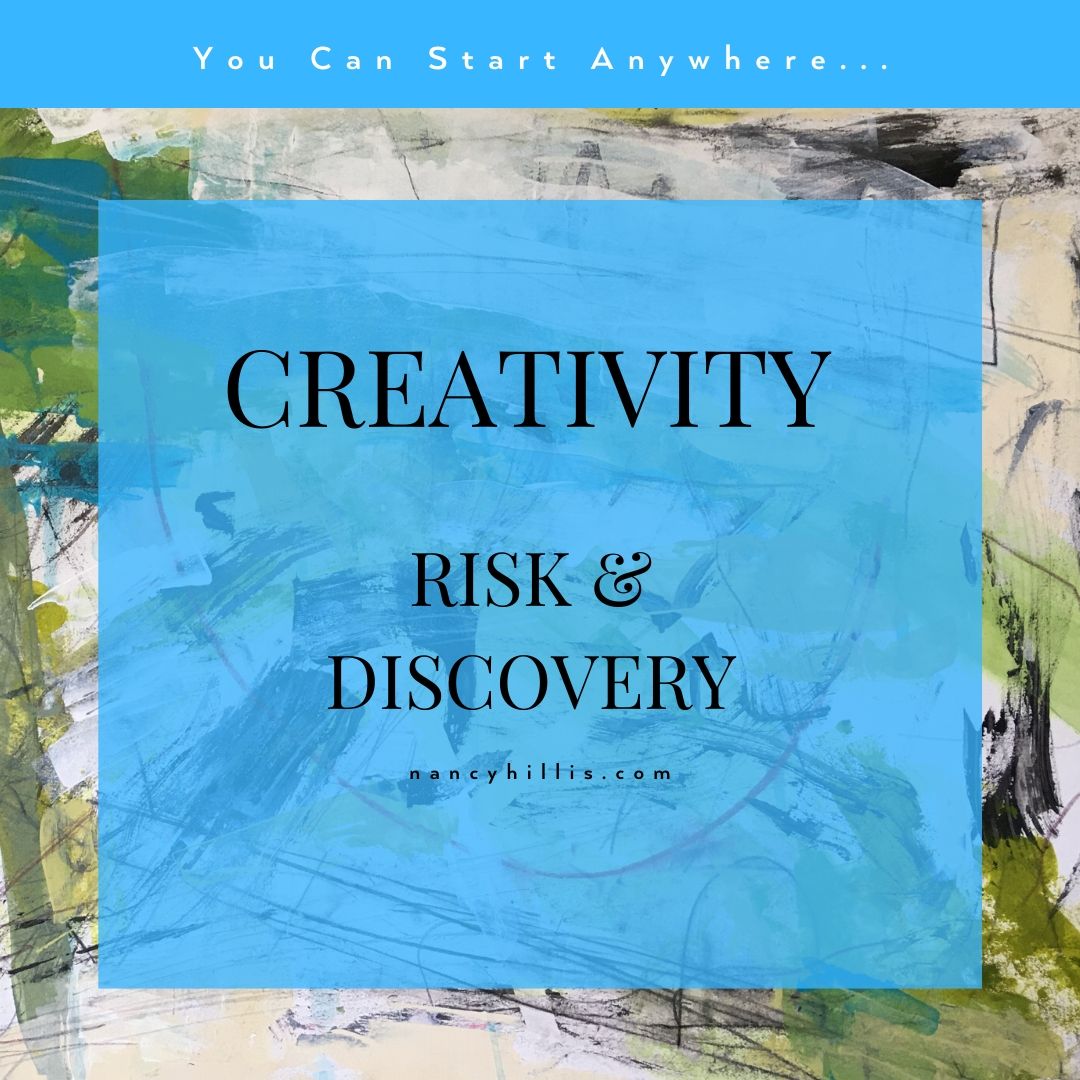 In last week’s blog post we reflected on the nature of luck and whether or not luck could be influenced or “engineered.”

We came to the conclusion that luck and creativity had deep common underpinnings, namely their attitudes towards the unknown and the unknown unknown.

In particular, it’s important to:

Treat the unknown as a source of life’s richnesses and not just as a threat.

Luck and creativity both embrace an openness to the possibilities of life, propelled by a confidence that “I’ll deal with it when I get there.”

Bruce tells a story about his first lesson about luck and the unknown upon leaving home to attend college.

When I graduated from high school, I hurled myself into the unknown by going to college three time zones away from home, something that is now much more common but at that time was quite rare.

I was ready for something very different, and never looked back.

Like impetuous, determined and restless generations before me, I went West, to a land of ambition and possibility.

When the jet engines of United Air Lines Flight 85 spooled up and pressed me back into my seat, I felt the breathless sensation of a mixture of excitement and fear, a great door swinging open to a huge and foreign landscape.

I watched the sooty crumbling despair of Detroit fall away. 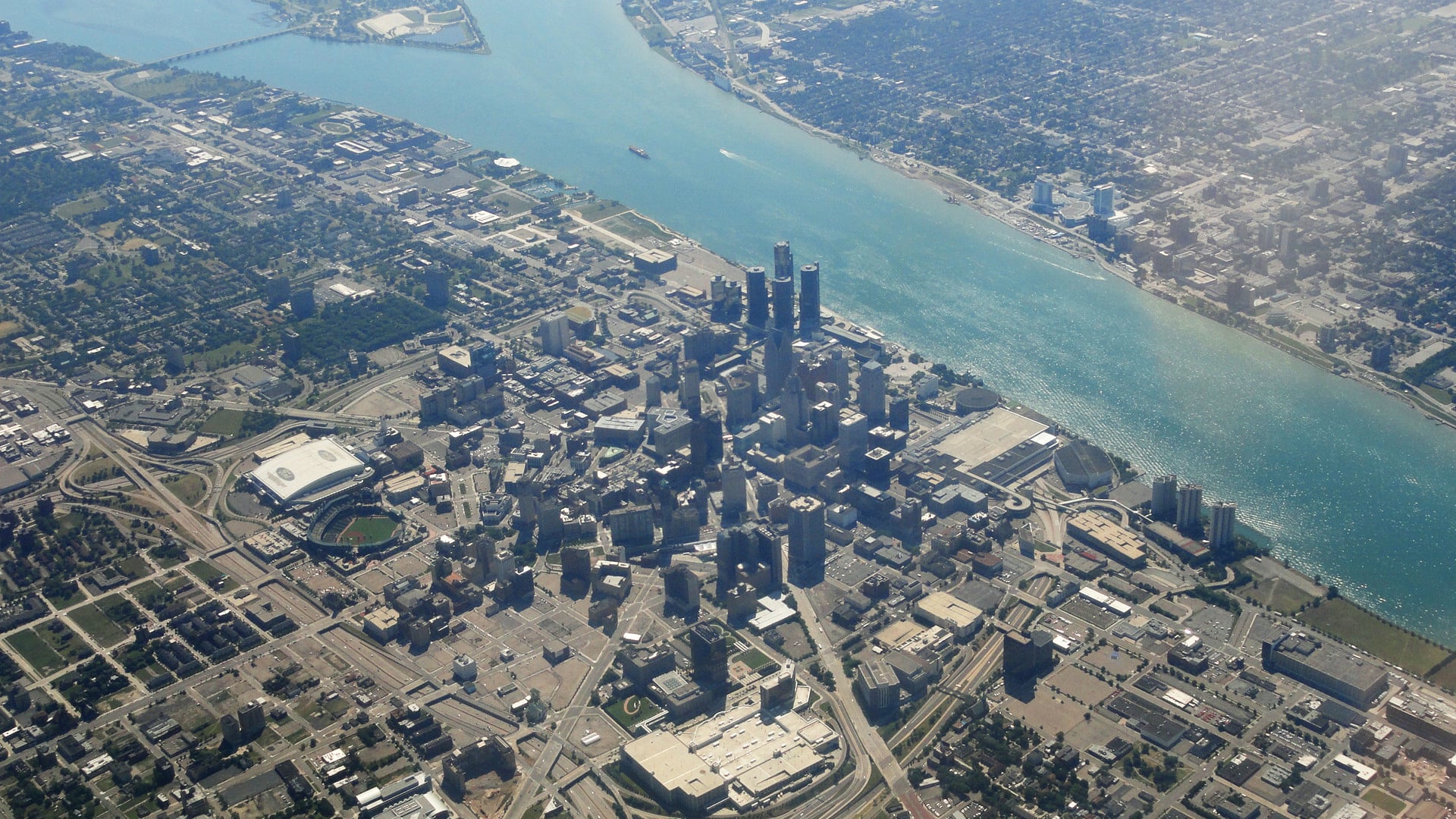 I knew I could never go back, because the “I” who would go back would no longer exist in the same way.

I had a window seat, something I’ve sought out in hundreds of flights ever since, because I never tire of geography from the air. It’s like a very high speed stroll through a very large art museum, some of whose works are millions of years old.

I watched the “westering” of the landscape below me, changing from a mosaic of forest and fields to the graph paper checkerboard of 160 acre plots on flat land laid out in the mid-1800s to systematize the settlement of a vast and growing country. 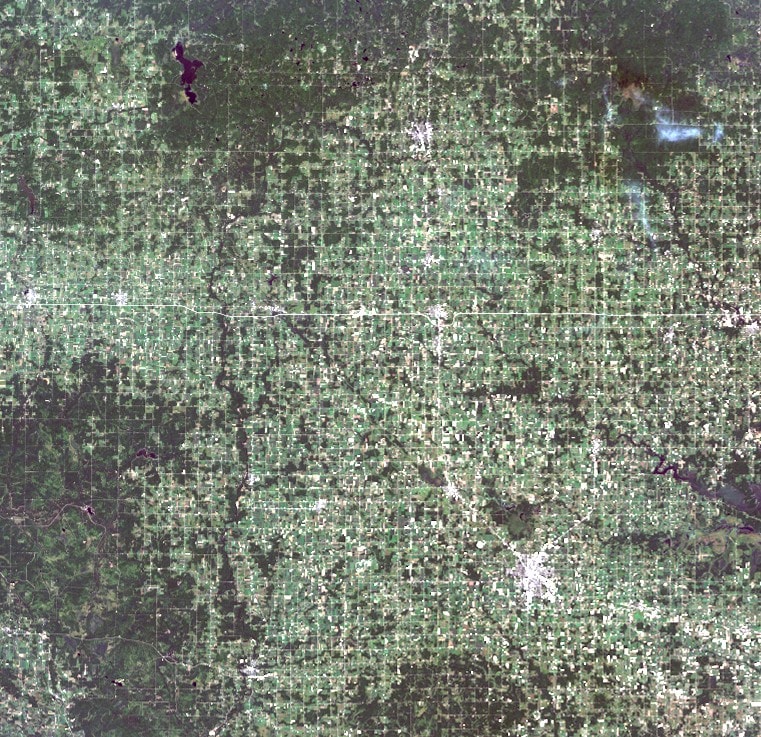 As the landscape rose below me, climbing inexorably towards the Rocky Mountains, the primal forces of the landscape began to intrude on the human geometry below. 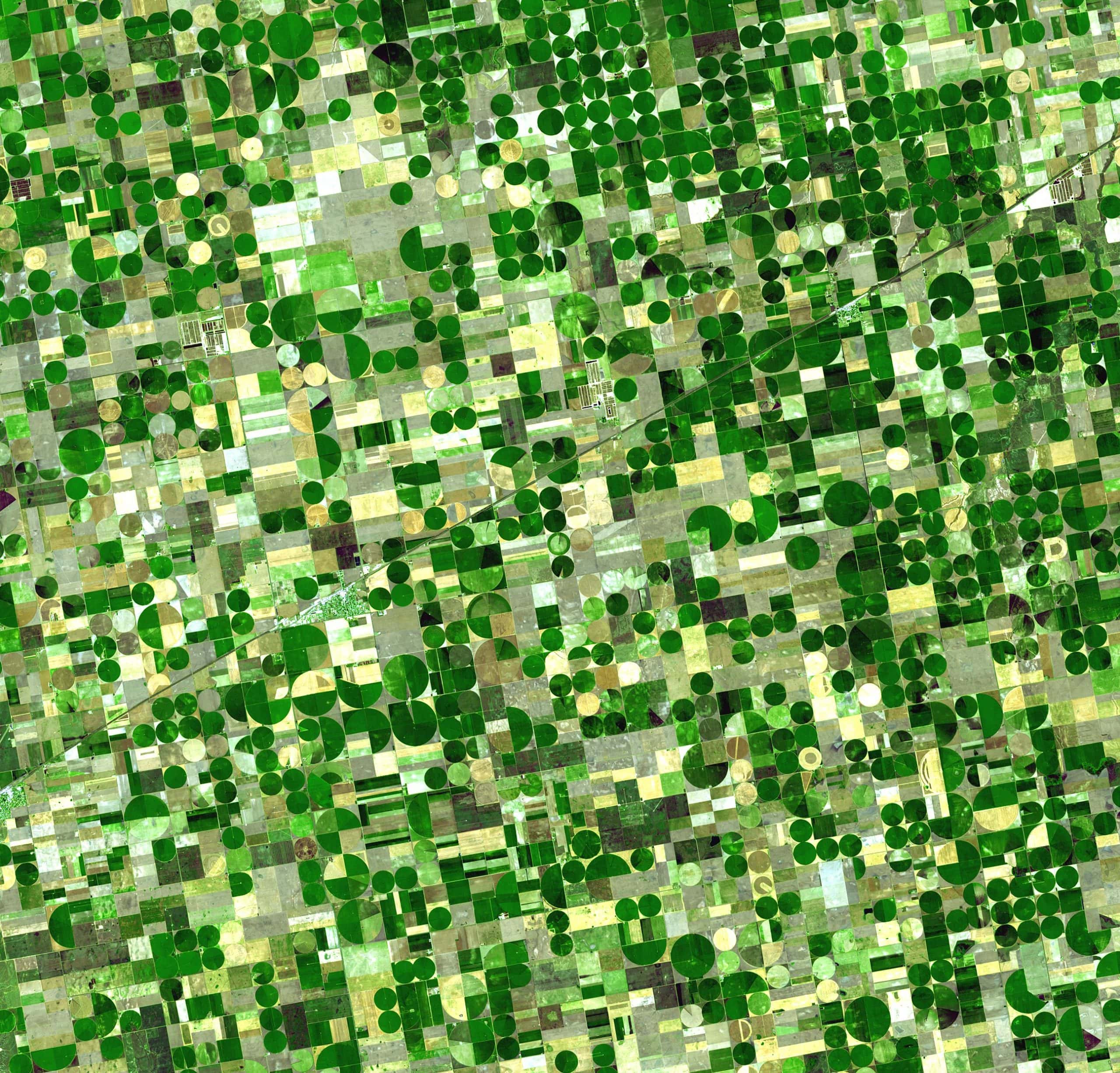 Then small sinuous fractal ravines began to appear and the green circles had to jostle to accommodate them, losing their regular placement, the first signs of cracks in the arrogance of human invincibility. 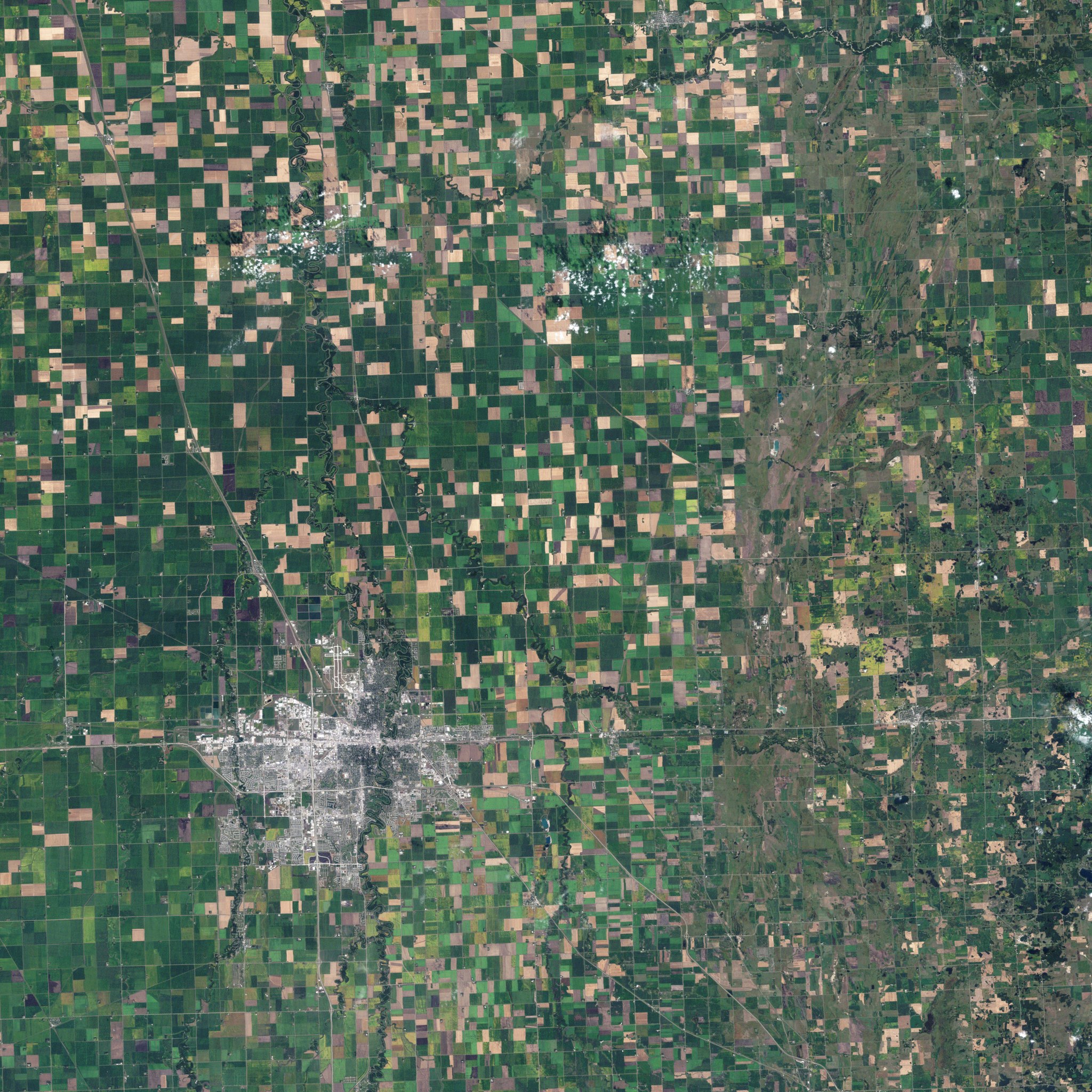 The little ravines became canyons, the hills grew to mountains, and the human influence scurried and retreated to narrow timid green valley bottoms surrounded by wild and rough and grand verticality, stone and scrub and the screech of circling hawks. 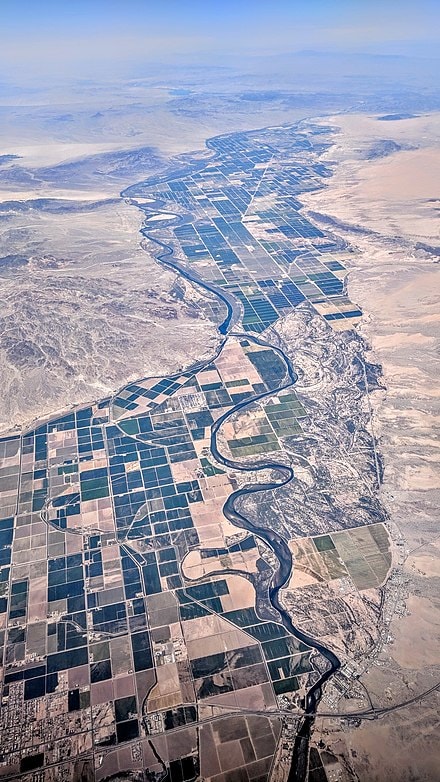 And then- the last remnants of snow at the end of summer, perched in high cirques and dusting the tops of peaks, icy forces consolidating themselves before marching forth in their winter campaign. 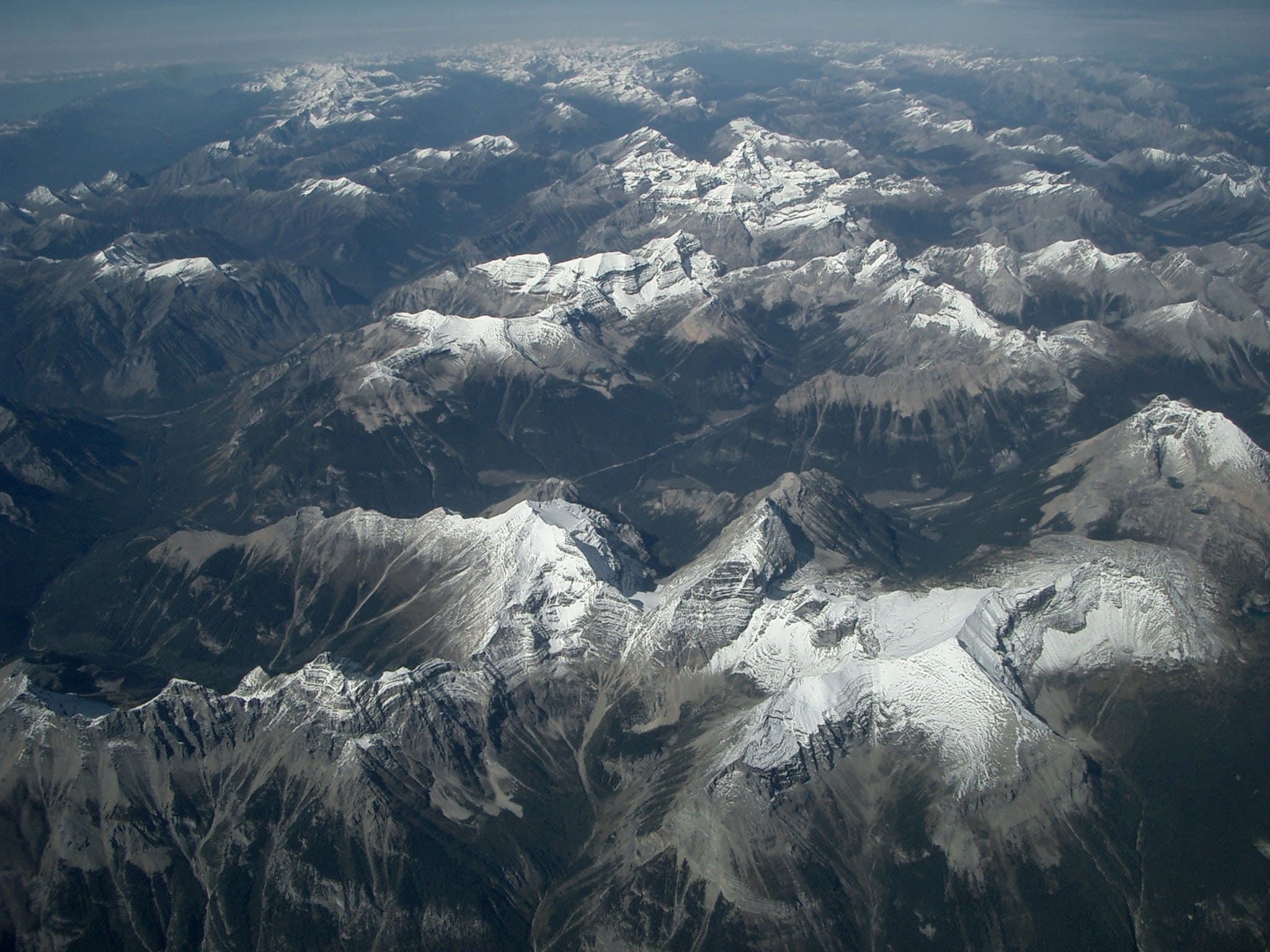 And, later in the flight, the engines idled and the flight began its long glide down to a new place, a city at the edge of the world.

The wild country was beaten back by a new round of green and human-marked land, almost as if the man made structures that had retreated earlier in the flight reformed and asserted themselves again.

They were familiar, but different, transfigured by miles and by new contexts, just as I would be in time.

When I got off the plane in San Francisco, I, like many fresh arrivals from the Midwest, said to the baggage handler on the charter bus, “Aren’t you worried about earthquakes?”

He replied, “I’d rather die here than live anywhere else.”

I realized that there were important general principles ensconced in that attitude. Important philosophy doesn’t only come from old dead guys.

My fascination with wild geography was not assuaged by looking at it from the air. I wanted to know it, to walk it, to feel the gravity and power in my sinews and lungs, to breathe in the high sharp air and sleep under the luminous wash of the Milky Way.

So I resolved to make an ambitious backpacking trip, to hike the entire John Muir Trail through the High Sierra of California, 212 miles of forests and rushing cataracts and sun-pocked snowfields and expanses of white granite harboring gems of shimmering blue lakes. 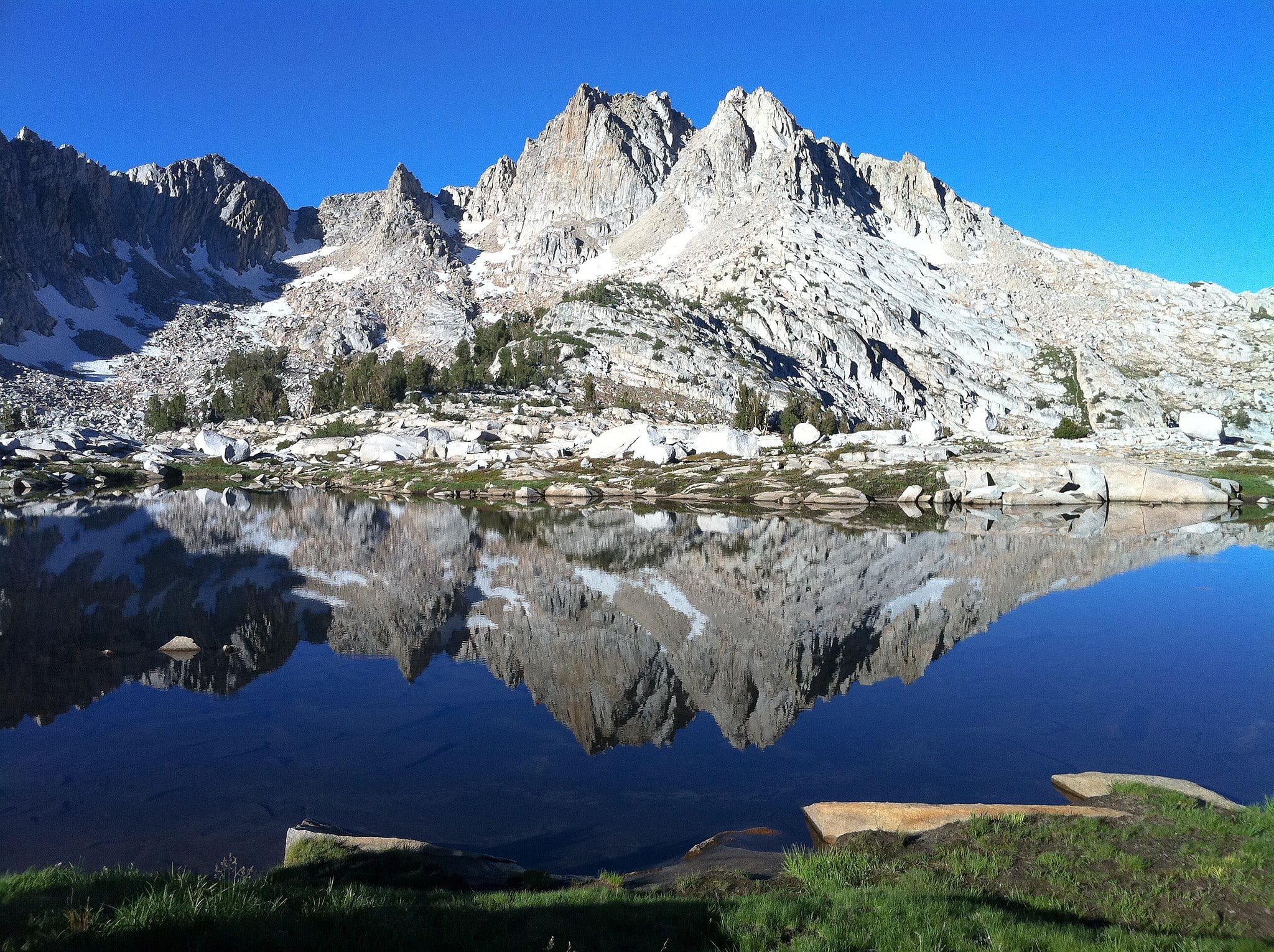 It took a year to plan and execute the trip with my best friend, and since I knew very little about backpacking, I sought out guidebooks.

One of the first I encountered was a very entertaining and useful tome (too heavy to take with you while backpacking, what was the author thinking?) called The Complete Walker by Colin Fletcher, a book that has been through four editions over more than half a century.

For the most part, it was a recipe book about gear and techniques to be comfortable and safe in the wilderness.

But buried in the text of tents and straps and stoves and boots were little gems of wisdom, almost like an exam testing one’s attention level.

It reminded me of the very short recipe in an early edition of Rombauer and Becker’s  Joy of Cooking that instructed one on how to cook a whale. 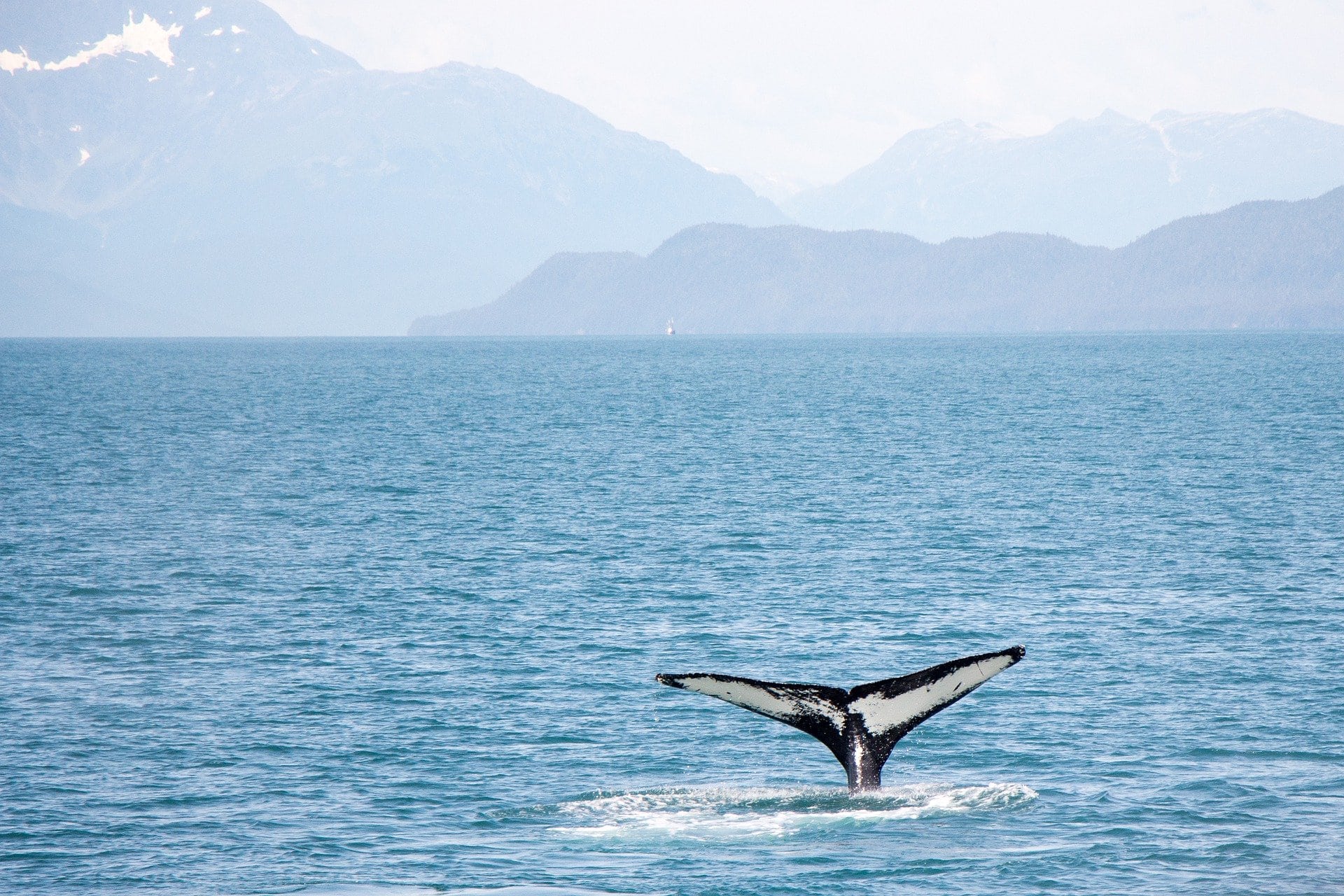 The recipe disappeared in later editions and I could never find it again. I presumed you needed a very large pot. Ingredients: salt, pepper, 1 whale.

But buried a couple of hundred pages into Fletcher’s book was advice about hiking alone, advice that turned out to have applicability far beyond backpacking.

Advice that perhaps should be set as a grand cantata for chorus, orchestra, organ, and massed brass, performed in a cathedral with slanting beams of afternoon sunlight from the stained-glass windows coloring the floating dust motes. 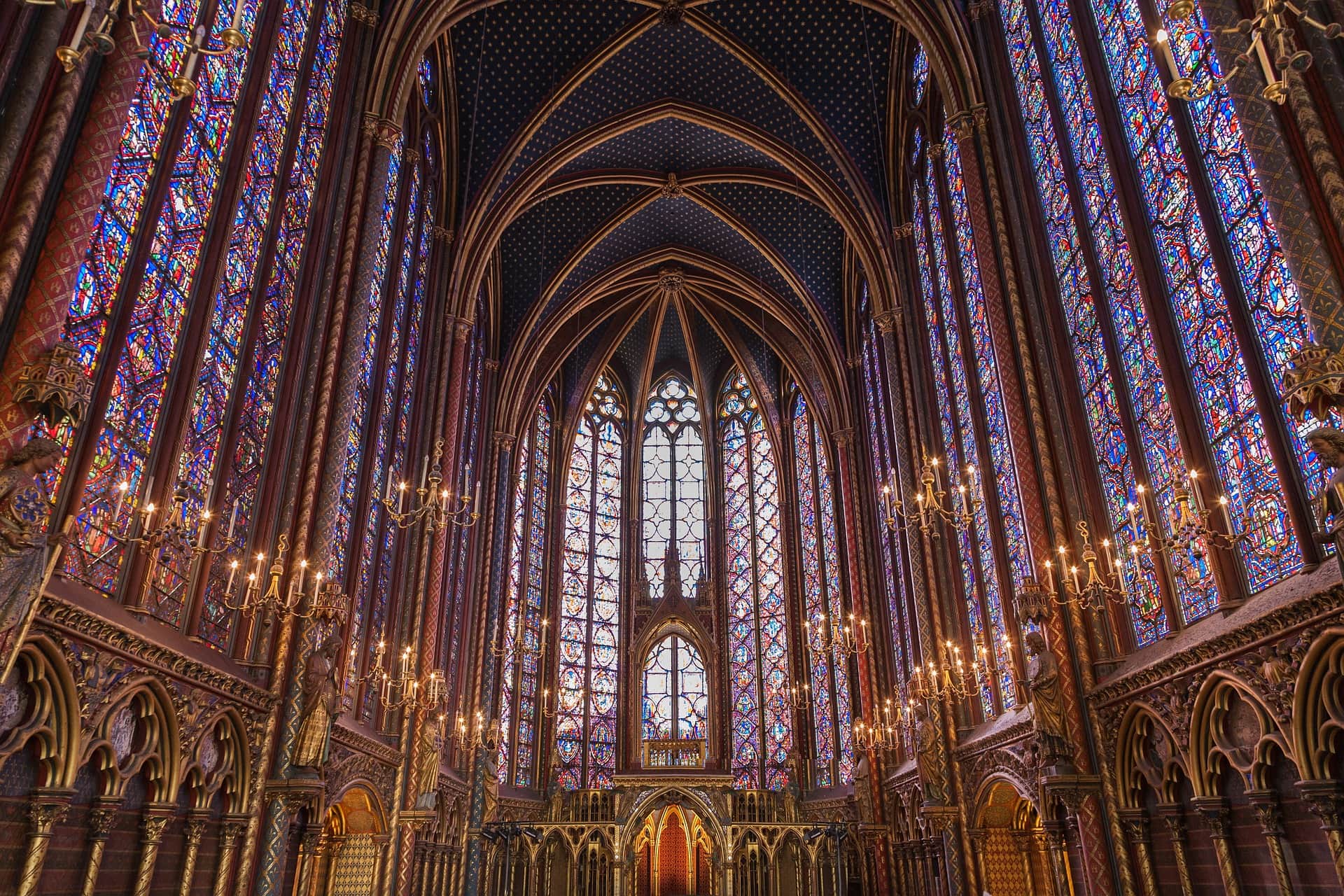 But if you judge safety to be the paramount consideration in life you should never, under any circumstances, go on long hikes alone.

Don’t take short hikes alone, either – or, for that matter, go anywhere alone.

And avoid at all costs such foolhardy activities as driving, falling in love, or inhaling air that is almost certainly riddled with deadly germs.

Wear wool next to the skin.

Insure every good and chattel you possess against every conceivable contingency the future might bring, even if the premiums half-cripple the present.

Never cross an intersection against a red light, even when you can see all roads are clear for miles.

And never, of course, explore the guts of an idea that seems as if it might threaten one of your more cherished beliefs.

In your wisdom you will probably live to be a ripe old age.

But you may discover, just before you die, that you have been dead for a long, long time.”

This quote takes us back to our original topics of luck and risk.

It is also remarkably prescient of COVID-19, mentioning “air that is almost certainly riddled with deadly germs”, because once in a while in the arc of history, that is actually true.

Life is definitely not risk-free.

Then again, as far as we know, death occurs with 100% probability, so nothing we do is going to change its occurrence.

Some risk is unavoidable, so it is important to make it count.

Ideas Die In Our Stead

We have also discussed how ideas can die in our stead, so is it really the end of the world if you start poking and prodding one of your favorite ones? There are more where that came from if you allow yourself to believe that there are, and the more you look for, the more you find.

The flight across the United States that Bruce described above mirrors the exploration of a cherished belief in the Fletcher quote.

The human landscape, seen from above, relinquishes the familiar, giving way to the wild and terrifying, and then it is reassembled in a new way in a new context.

The tearing down must always precede the remaking. It involves losing one’s bearings and finding them again, the ever-recurring form of the Hero’s Journey, played out in fast-forward comfort in an upholstered vinyl seat at 35,000 feet, accompanied by the tinkling of ice cubes in a plastic cup of sparkling water.

In a previous blog post, we discussed the tension between order and chaos, the spectrum between the randomness of television snow on one extreme and the regularity of a metronome on the other, and the importance of both being represented in art.

Bruce first thought about this existential duality on that flight to attend college, watching the landscape change from the metronome regularity of the checkerboard squares of the Midwest to the jagged jumble of the high peaks, then emerge on the other side to a landscape that had both elements in it.

California is an only half-tamed landscape, the geography powerful and restless in its provisional tolerance of grooming, occasionally shaking off its irritations in periodic temblors.

The civilization is poignant in its ephemerality, charged with life because time is always short.

There’s an old saying, sometimes ascribed as German, other times as Chinese:

The Juxtaposition Of The Spontaneous & The Considered

The evolution of the landscape mirrors the evolution of art- the juxtaposition of the spontaneous and the considered, the negotiation of forces, the intelligence of consciousness coming to terms with the implacable fecundity and patience of nature.

The elements of order and chaos, both essential, harmonized in an essential tension.

Life, like art, has to balance the order of certainty with the chaos of risk to produce something of meaning.

And, to be true to one’s artistic self, the artist has to do so as well.

P.S. Leave us a comment. We’d love to hear your thoughts.

If you like this blog you’ll love my book. Get your copy of my award winning book: The Artist’s Journey: Bold Strokes To Spark Creativity. 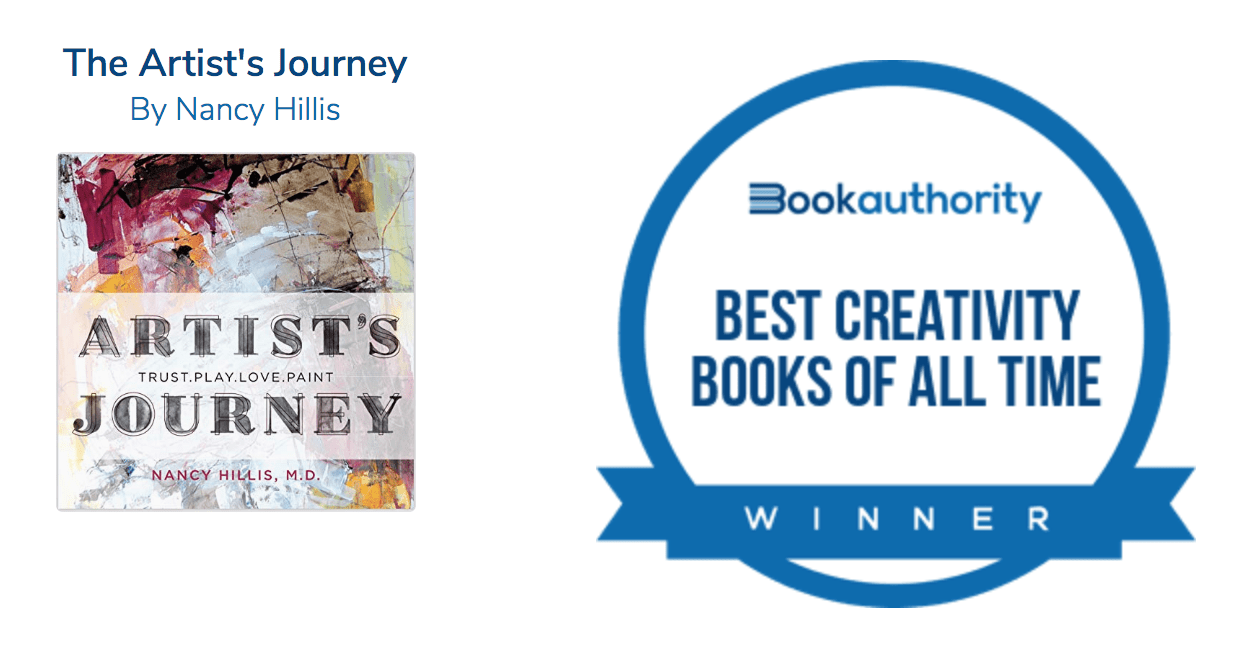