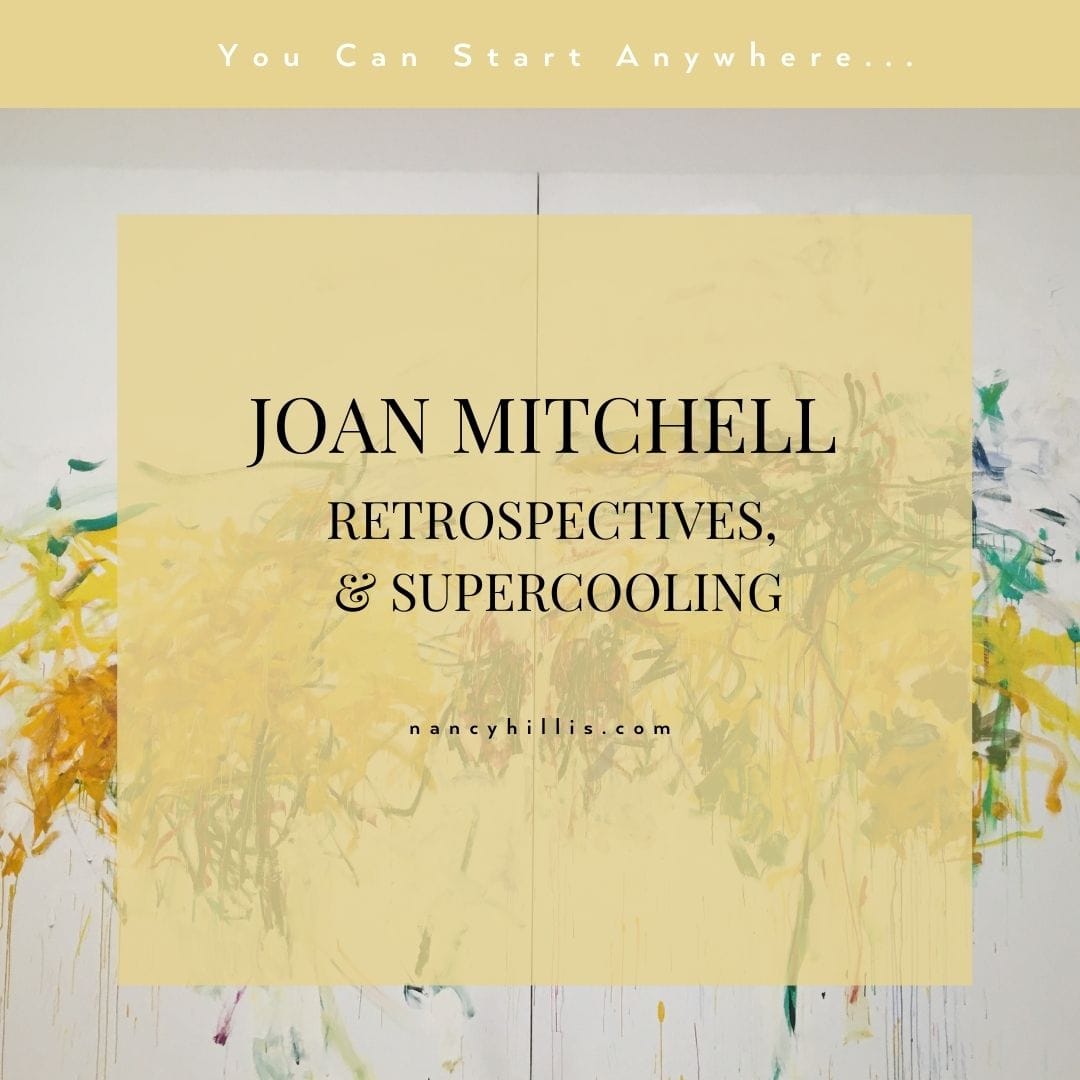 Earlier this week, Nancy and Bruce joined two dear friends, Vera and George Tchikovani, and went to the San Francisco Museum of Modern Art to see a retrospective on the abstract artist Joan Mitchell. (1925-1992)

It was a tremendous exhibition, covering five decades of her artistic life, about 80 paintings, many of them monumental in scale. 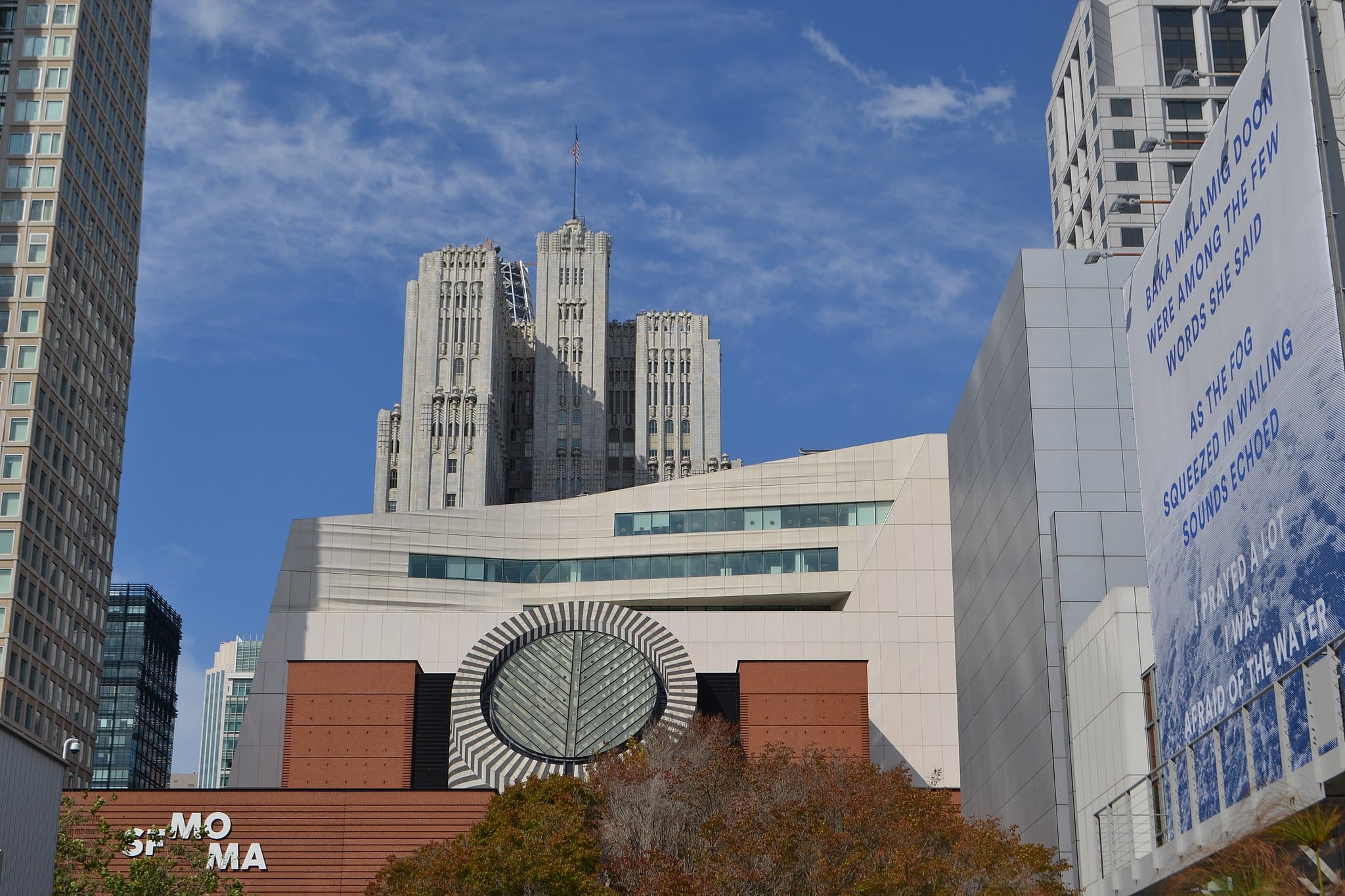 It has become so difficult to lend art from museum to museum, let alone from country to country, that it seems like retrospectives have shrunk over the years. More expensive, more crowded, and less art.

This was an exception to that trend. Normally one finishes viewing a retrospective just when one is getting into the rhythm and ends up unfulfilled and wanting more.

This one was thorough, occupying a dozen generously scaled rooms. We were saturated and satisfied just at the time it ended, with a last delicate diptych evoking sunflowers. 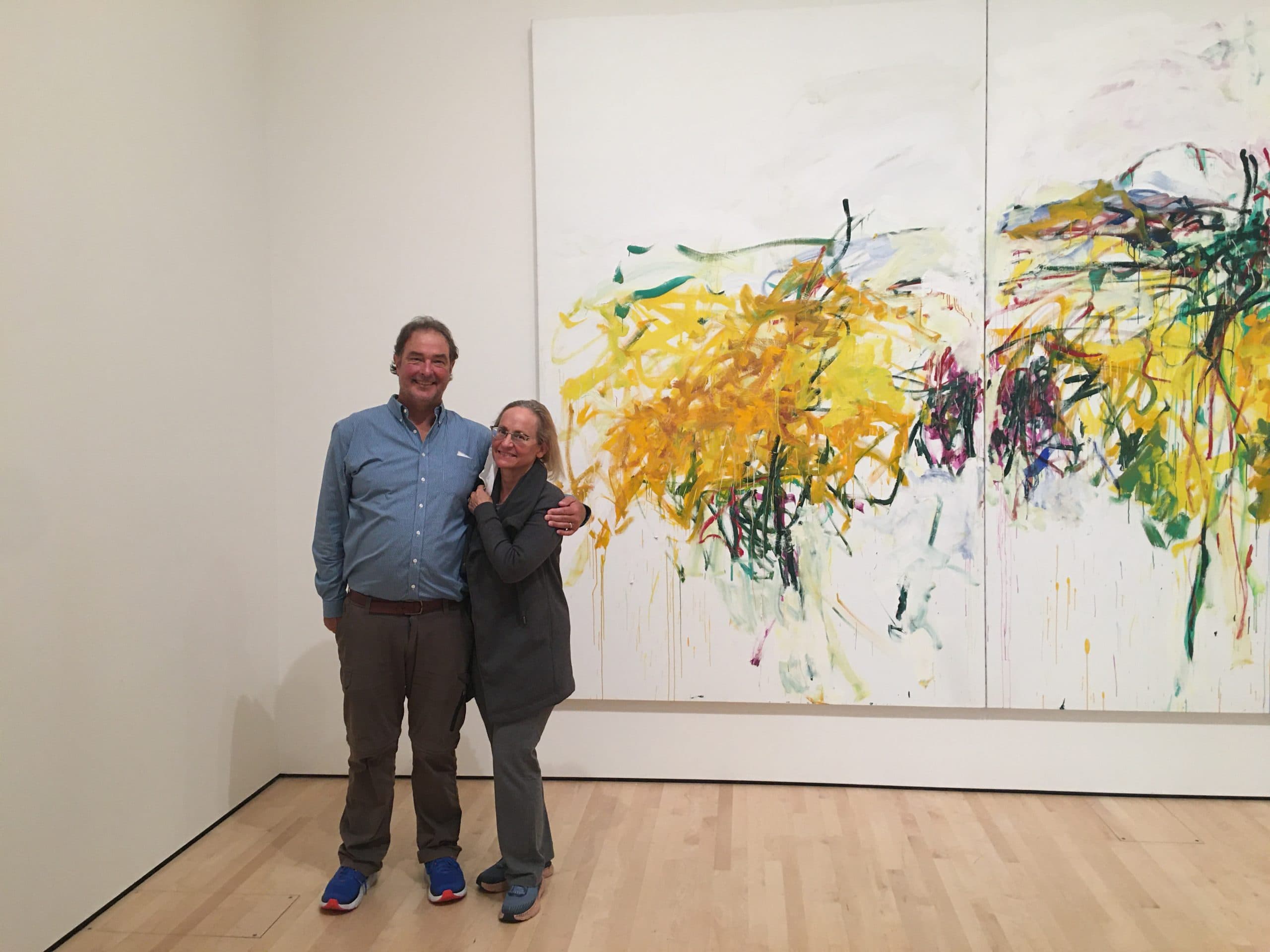 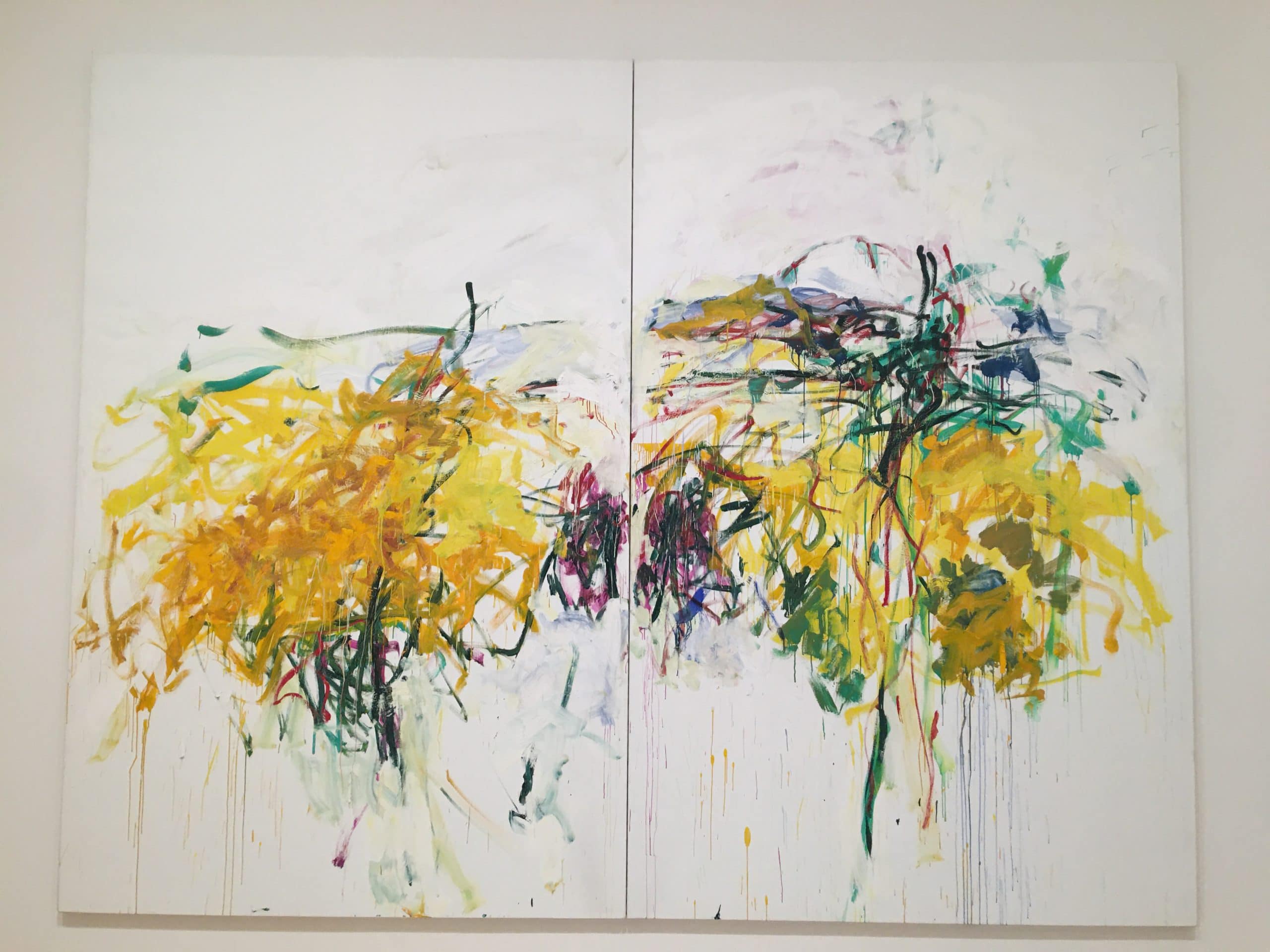 Untitled from 1992 is one of Joan Mitchell’s last paintings. It evoked a sense of elegant and weightless simplicity- a satisfying ending to the retrospective.

As we proceeded to lunch in the museum cafe, we saw images of Mitchell’s studio. We were particularly intrigued with her wall of exploratory studies. They looked like maquettes, playing with possibilities of the division of space for future compositions. 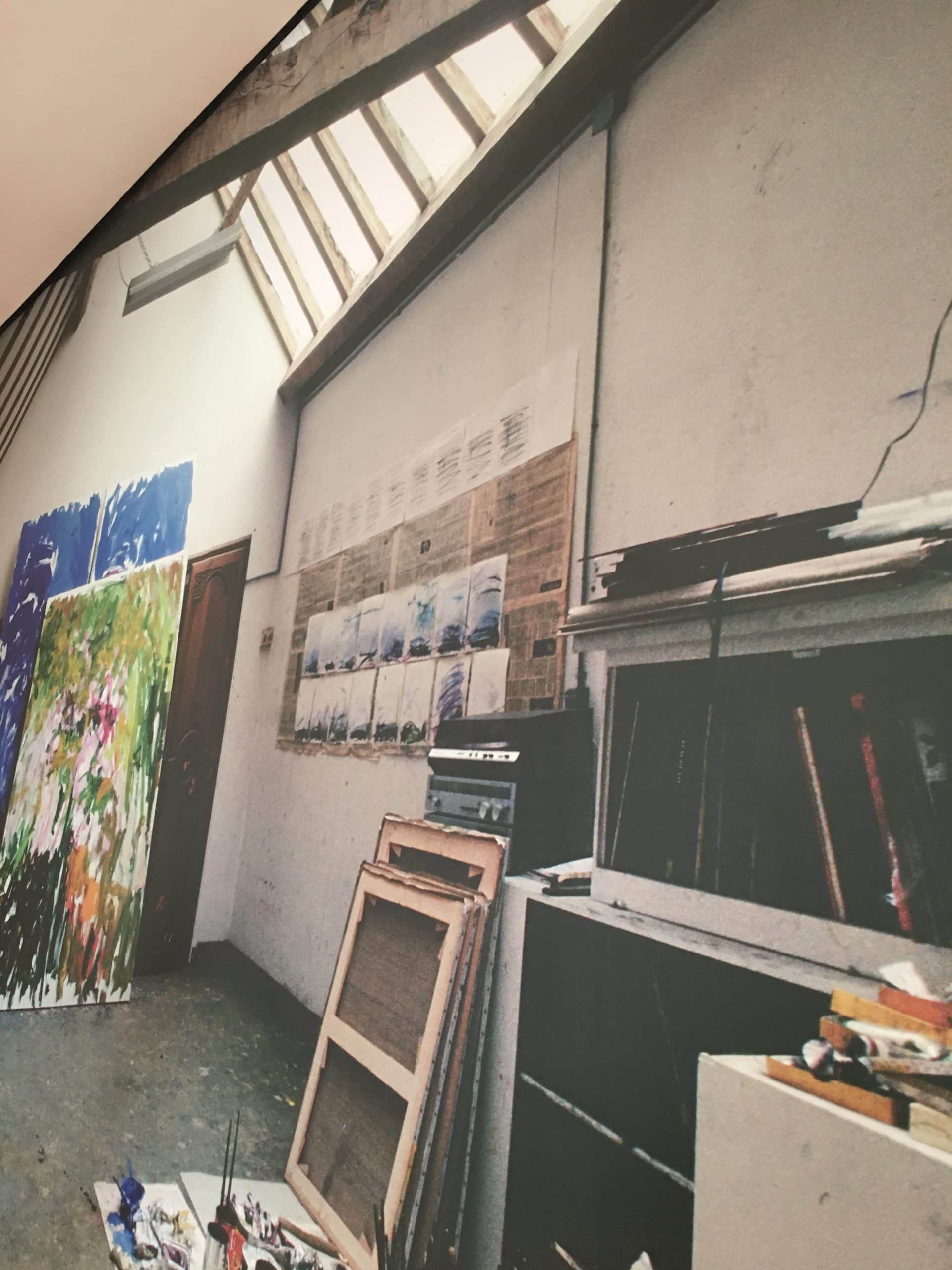 Joan Mitchell Studio with exploratory studies on the wall 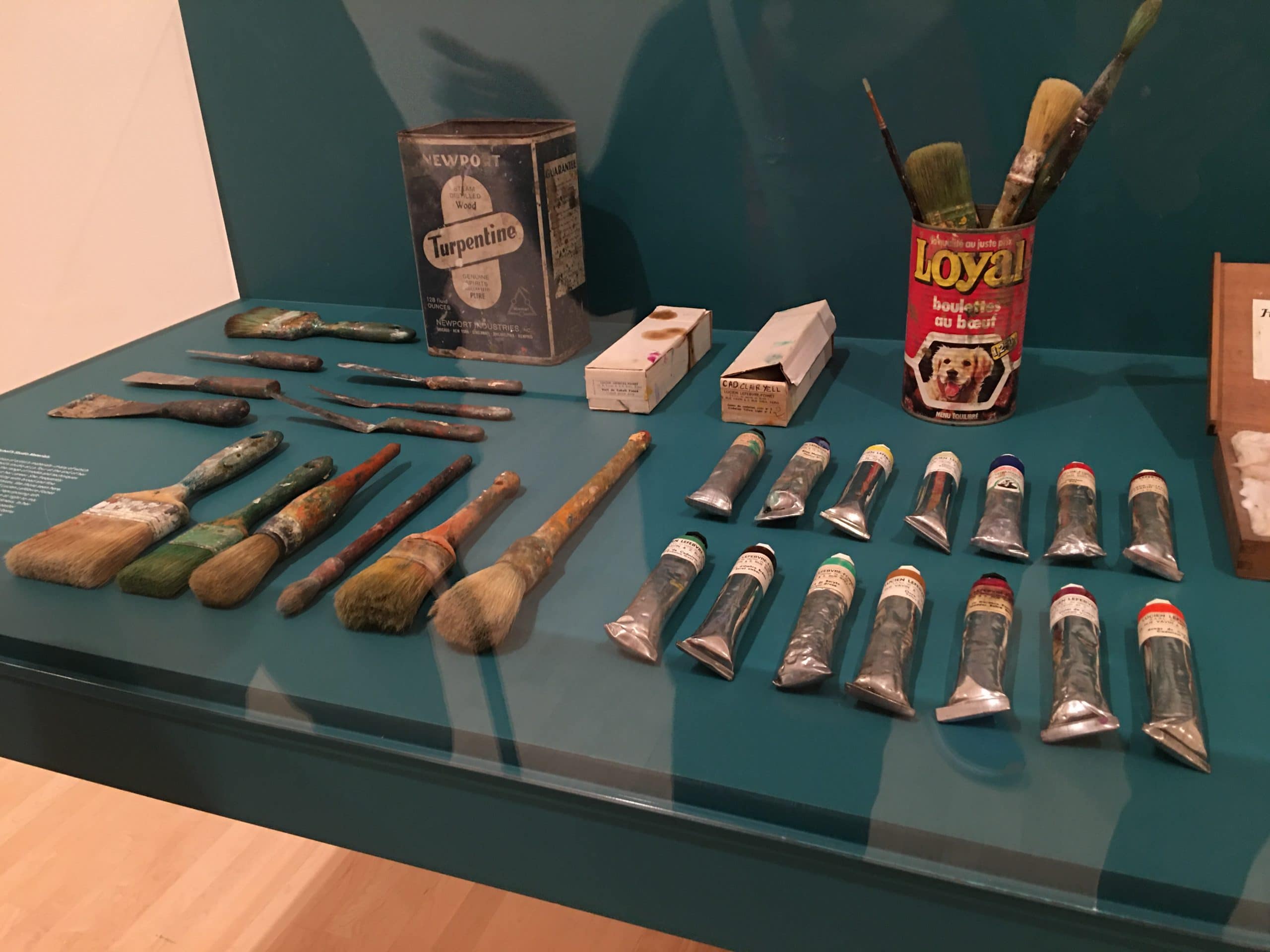 Long-handled brushes, graphite markers, crayons, and pastels were seen in the display case as well. 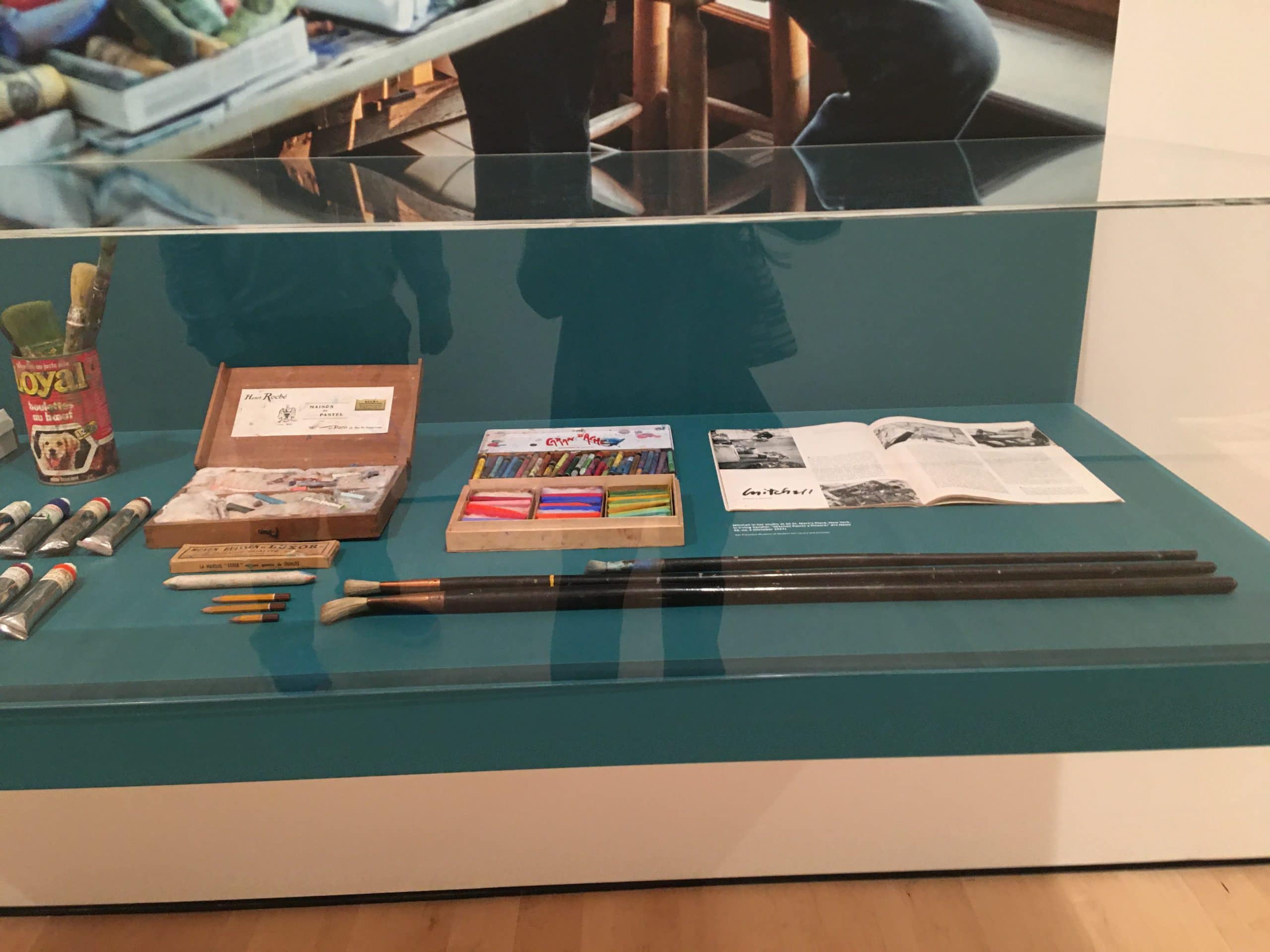 The Idea Of A Retrospective

The idea of a retrospective can be applied beyond the usual subject matter of famous artists who are no longer with us.

In fact, it can be a good idea to put on a retrospective of yourself. Imagine you are a curator of a museum and you want to depict the artistic trajectory of your chosen artist (you) as accurately as possible.

You would choose pieces from many different times in the artist’s life, perhaps samplings from multiple series or themes. You would attempt to arrange them in such a way as to tell a story to a potential museum visitor.

If you do this, even on your computer screen with a group of thumbnail photos serving as your museum wall, it can generate insight.

You can view what you were creating two or ten or thirty years ago and think, “I’ve come a long way” or perhaps, “What was I thinking?”

Below, we explore the first works in the Joan Mitchell Retrospective and are amazed by the rapid transformation in her art.

We have repeatedly argued that this phenomenon of phase transition is not solely a property of physical systems, but can be associated with more abstract systems as well.

Anders Ericsson’s research helped establish a concept called the 10,000 hours rule, which was later popularized in Malcolm Gladwell’s book Outliers. The idea of “ten thousand hours” is to become deeply proficient at something by working hard at it for hours and hours.

Rather, it feels more like endless thankless toiling in obscurity, followed by a sudden flash of light, of discovery, of confidence. This is because the “knitting together” of ability and meaning and expression is not linear- it tends to be sudden.

Once in a while, it takes the act of pausing and contemplating to realize that a transformation has occurred.

I think of old Saturday morning cartoons where the coyote (always chasing the rabbit) runs off the edge of a cliff but does not fall until he looks down and realizes that he can fall. The gravity of cartoon physics has been held in abeyance by the existence of consciousness.

There is a remarkable physical phenomenon that is reminiscent of this. It does not involve consciousness, but it does involve a triggering event.

We have said that physical phase transitions occur at a very specific and precise set of external parameters, such as temperature, pressure, etc. Now we’re going to tell you that there is an asterisk after that claim.

Some systems that are liquid can display “supercooling.” This means that a liquid can be cooled below its freezing point without solidifying. That is because the crystallization has to start somewhere (zero to one!), and if the liquid is very pure and there are no outside effects like dust particles or temperature probes, the liquid keeps getting colder without freezing, at least to a point. 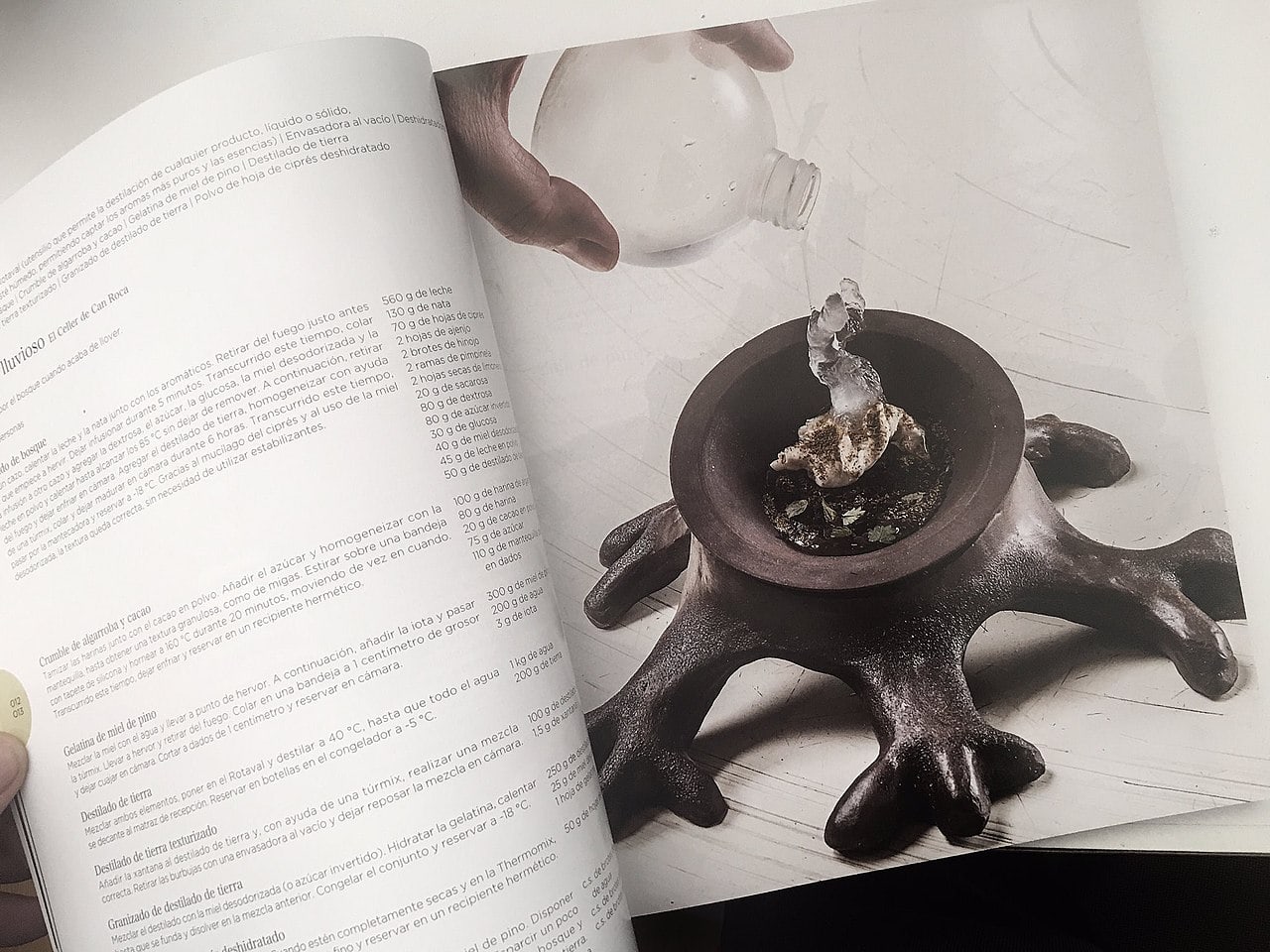 For water, this point is -48 deg. C. Cold ice indeed! This generally does not occur for large bodies of water like lakes and rivers, but more typically in controlled environments like carefully cooled clean containers of purified water.

The author Kurt Vonnegut based his 1963 novel, Cat’s Cradle, on the possibility of a new phase of water that was solid at room temperature, but up until the events described in the novel had only existed in a lab, the famous “ice-nine.” For reasons too complex to explain here, ice-nine is not even theoretically possible.

What does this have to do with art and retrospectives? Like supercooled water or the cartoon coyote not looking down, a point of crystallization or flash of awareness is required to bring the system to its proper and robust state.

Your creativity may have evolved through a phase transition, but you’ve been so busy getting there you may not have realized it!

This is why you might schedule a “self-retrospective” show occasionally. No tickets, reservations, or masks required.

If you enjoy this blog, you’ll love our latest book, The Adjacent Possible.

To get a taste of the book, listen to The Adjacent Possible Book Reading from Chapter 1 HERE. 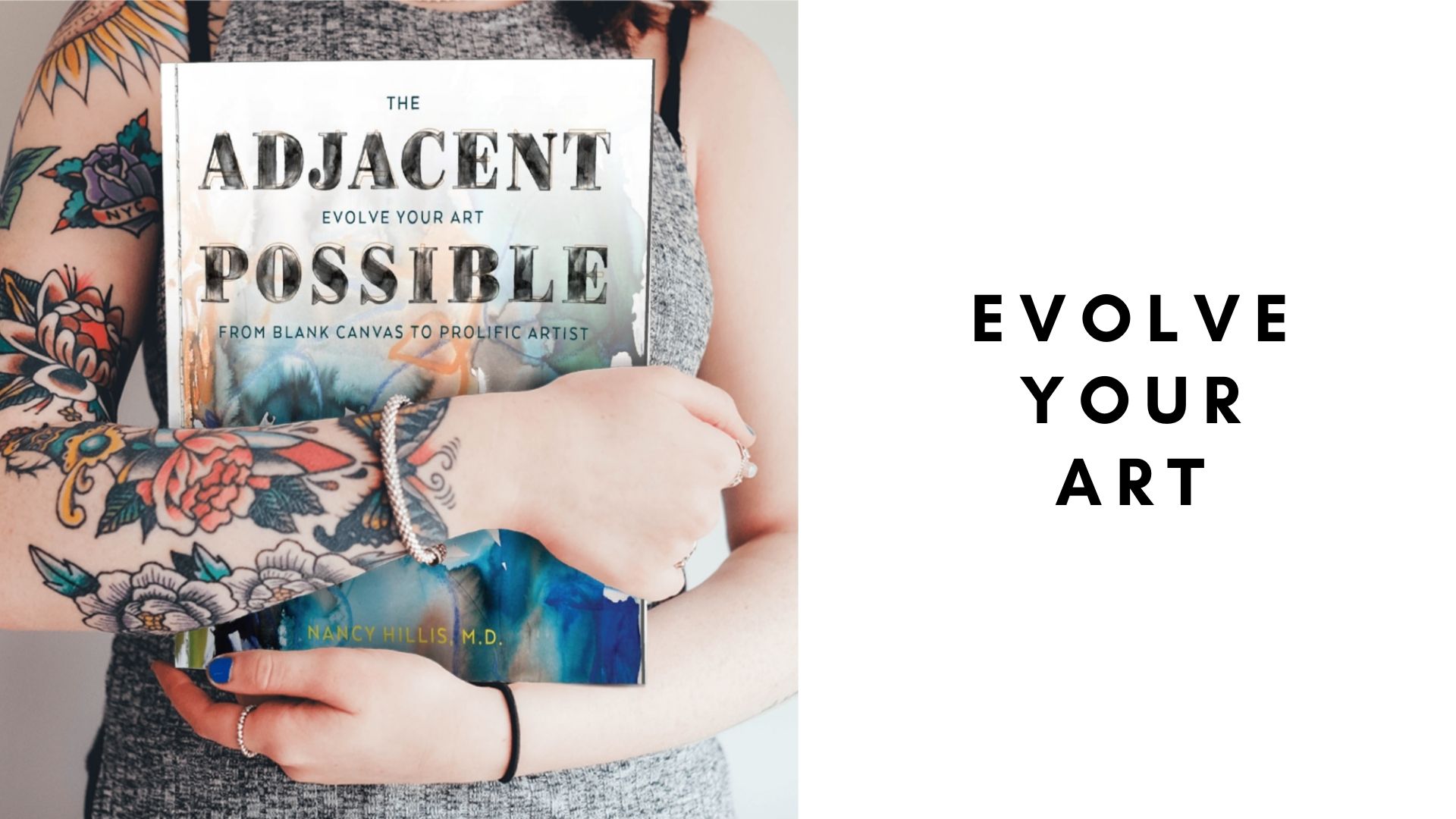