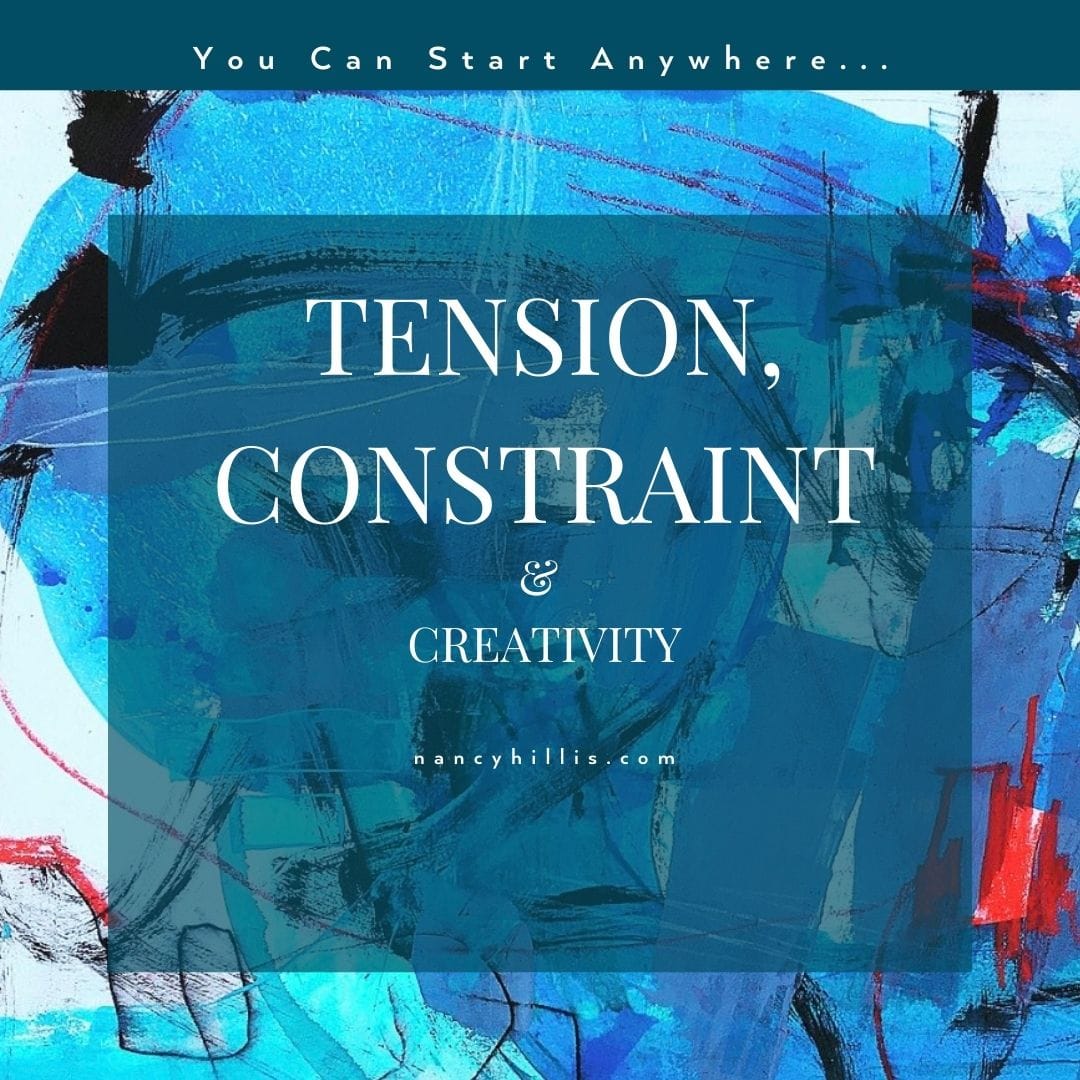 It is a tall order to top last week’s blog with its compendium of ideas. Rather than do that, we’ll pivot and go off in a new direction.

So we won’t try to top it, but instead will introduce a topic that brings together many of the abstract concepts discussed last week.

This is an idea that goes by many names: Inseparability, oneness, wholeness, integrity, German durchkomponiert, French monocoque, and many more.

Tension and Constraint in Evolved and Designed Systems

Constraint is an overarching concept in both art, nature and creativity.

Consider the egg. Astonishingly simple and beautifully evolved. It has no “framework”, or more properly its framework and skin are one.

Humans have learned to build similar structures, but it took centuries of trial and error and great advances in materials science. 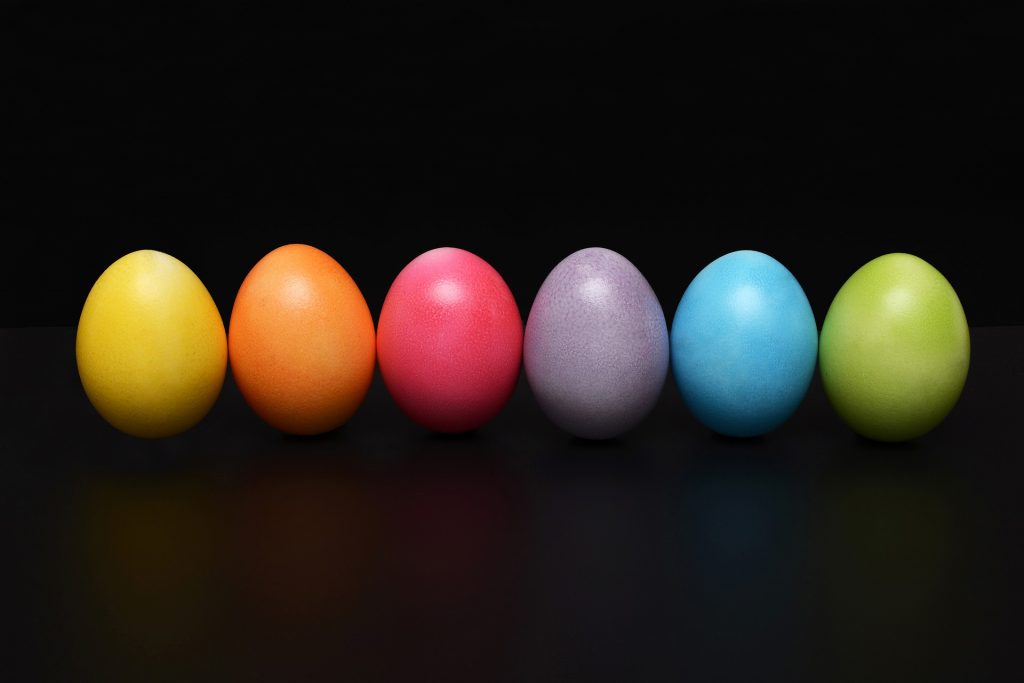 In the early years of the 20th century, builders of aircrafts and boats began to create fuselages or hulls that were increasingly egg-like.

Originally boats and airplanes were built more like houses, full of rafters and beams and joists (or keels and frames and longerons and struts) under a coating of fabric, wood or metal. 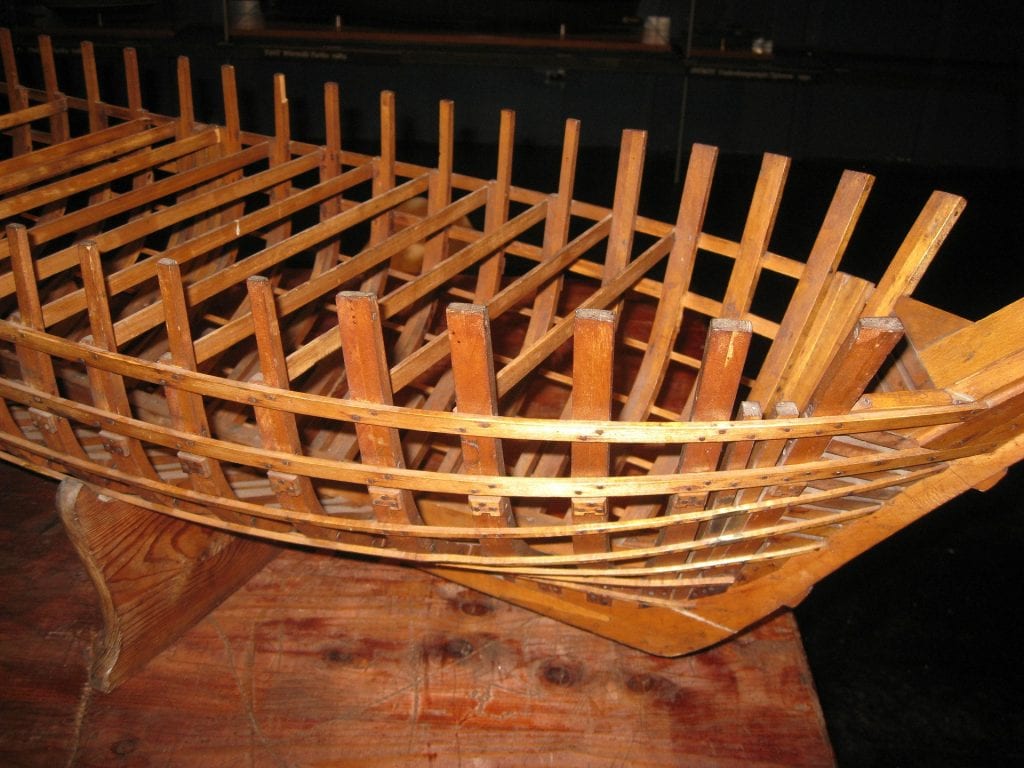 Since interior space is at a premium in boats or airplanes, there was an incentive to get rid of as much internal structure as possible.

Hulls or fuselages were built up with layers of material, originally thin and bendable wood and later fiberglass or carbon fiber. These shells incorporate both compression and tension to hold their shape and resist deformation.

To as great an extent as possible, the skin is the framing.

What does this have to do with the boatload of concepts from last week?

Constraint & The Edge Of Possibility

The fact that airplanes and boats are built to move and encounter external stressors counts as a constraint.

The fact that those structures need to be light to be economically useful acts as an evolutionary pressure, pushing them towards a boundary at the edge of possibility, the satisfiability phase transition.

We opine that aircraft and boats are often beautiful because of the interplay of constraint and optimization, the refinement of a harsh evolutionary taskmaster. Solutions that work well can take a long time and are difficult to find.

History has erased most of the failures. 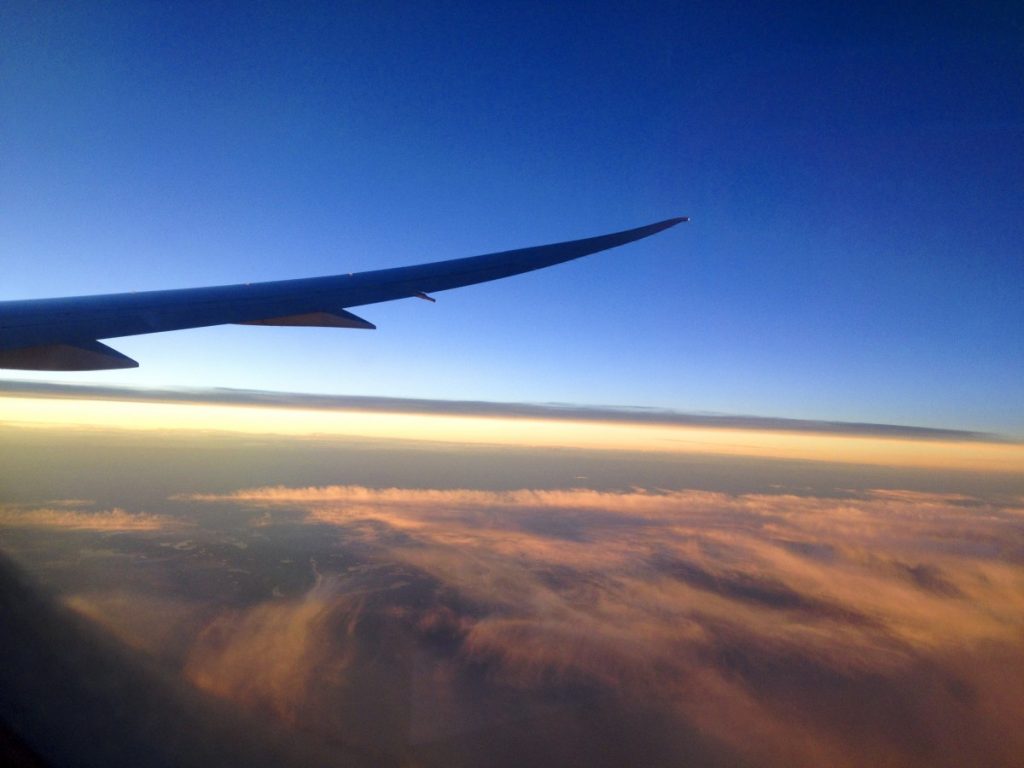 The result of this interplay is an object that is of a piece.

It is not separable into component parts, at least without destroying its integrity and usefulness. 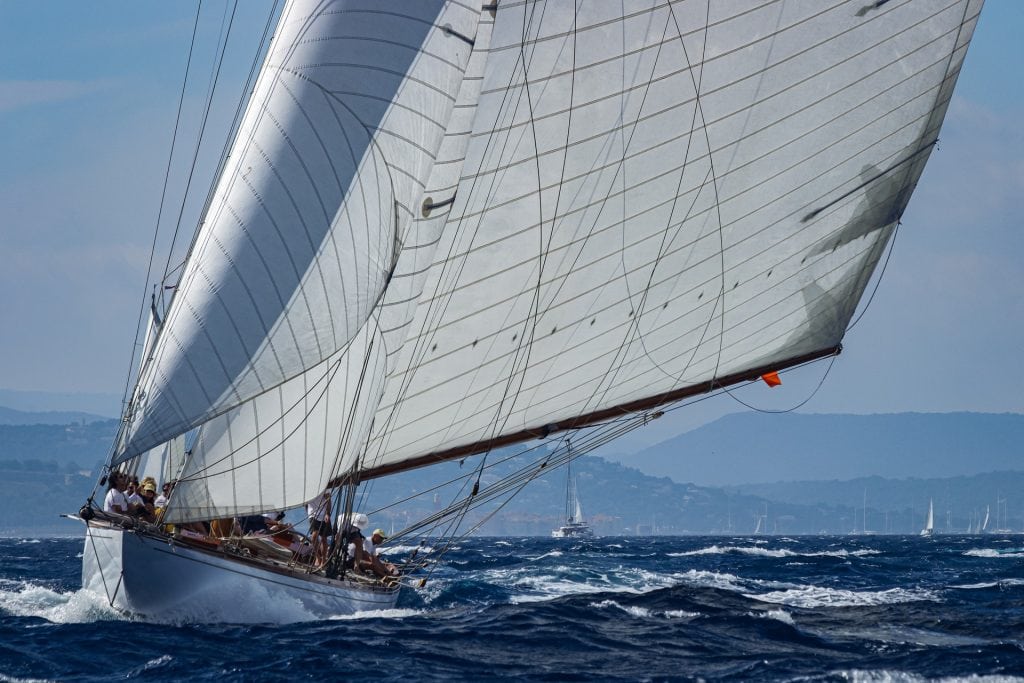 A piece of music that is similarly built is one without repeats, identified by the German word durchkomponiert, which translates as “through-composed.”

This concept comes up in song accompaniments, a famous one being Schubert’s Erlkönig, (elf-king) set to the poetry of Goethe. The song has multiple verses but different music for each.

It took Schubert four tries (at least published ones) to converge on a version that he was finally satisfied with. This was a case of many starts.

Architecture & The Concept Of Durchkomponiert

Long ago we discussed a hypothesis about architectural properties of compelling and interesting spaces, with the idea that proportions need to not be easily separable. They need to be related in terms of being mutually prime– no two numbers divide into each other.

An example is a space of proportions 3:5:11. The observer’s mind cannot easily break the space up so it has to be perceived in a holistic fashion.

This applies to conventional spaces that have readily identifiable length, width, and height. One can also go meta, and achieve integrality by creating forms that are not rectilinear at all.

A famous example is the Sydney Opera House, designed by Jørn Utzon in 1957. 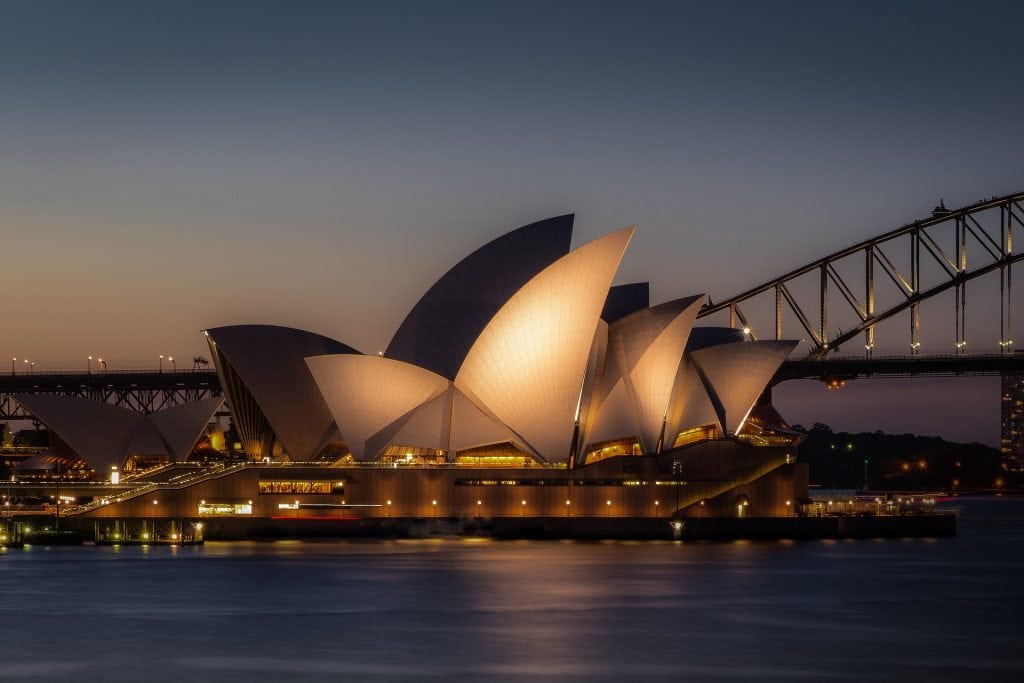 The egg discussion brings us to the idea of tensegrity. The word is a combination of ‘tensional’ and ‘integrity’.

This is a concept first given identity by the polymath Buckminster Fuller in the 1960s. It describes a structural system of rods and cables held together in such a way that the rods are under compression (from cable attachments at their ends) and the cables are under tension.

Tensegrity structures are a harmonious balance of rigidity and flexibility.

Because this can be hard to imagine, even if you’ve seen it before, here is a picture of a sculpture on the Stanford University campus, one that Bruce often paused to look at on the way to class or to practice the organ in Memorial Church.

Fittingly, it is called Mozart 1, by Kenneth Snelson. 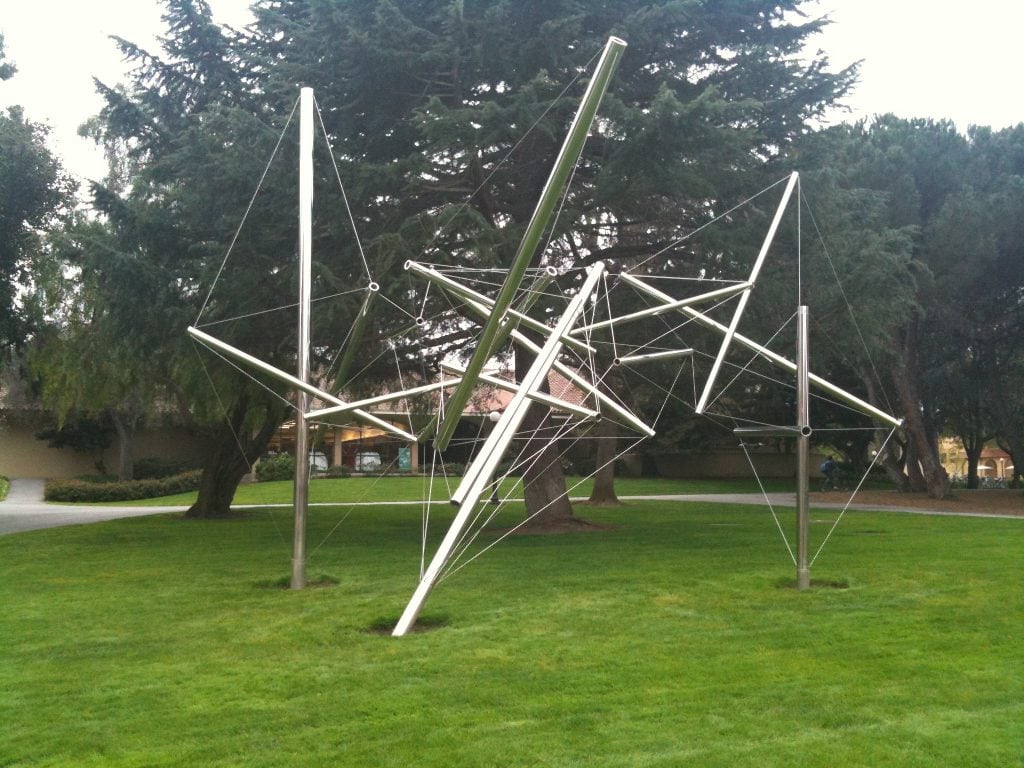 The whole system floats in a seemingly fragile but actually very robust equilibrium. It is a harmonious relationship.

The rods provide constraint and compression, the cables provide tension and freedom of movement.

An aside—we wonder how these structures actually get built? It seems like they would require ancillary structures to hold the pieces in place until all the cable to rod attachments were made, then the whole thing could be tossed free like a released bird.

This harkens back to the blog post on scaffolding, the idea that many complex structures require components in their construction or evolution that are no longer present.

This highlights a phenomenon in creativity- artists can be in such a rush to get to the “finished” product that they blow right past profound subtleties like scaffolding.

Not surprisingly, it is difficult to find discussions of the actual construction process of tensegrity structures—putting them together is a minor detail—just get a few friends to hold the rods while you attach the cables and we all let go on the count of three.

We’re so enamored by the result that we forget how we got there.

In science and in particular physics, a great deal of powerful theory has been built around the idea of equilibrium.

But for many decades, even centuries, physicists averted their eyes and quickly shuffled past the process of systems getting to equilibrium, as if it was somehow shameful or immoral.

All such phenomena were labeled under the pejorative label of transients— Behaviors that were beneath notice because they didn’t last long, subtly perpetrating the Platonic bias towards valuing the permanent and immutable.

It is becoming increasingly apparent that much of the interesting stuff, like life, does not happen at equilibrium. Getting there is not only part of the story, it is the story.

It’s all transient. To paraphrase Plato out of context, equilibrium is a “useful fiction.”

This quivering equilibrium in the tensegrity sculpture is such that the structure can withstand forces on their component pieces and the whole structure becomes stiffer in response- it is almost as if it responds to the challenge.

Bruce recalls testing this hypothesis on the Stanford structure at night when nobody was looking. He would jiggle one of the rods or tug on a cable and it would offer increasing resistance as if it was pushing back in order to maintain its robust stability.

Even though Buckminster Fuller named the concept, he did not create it.  It existed in much older forms such as skin-on-frame kayaks and shoji screens. 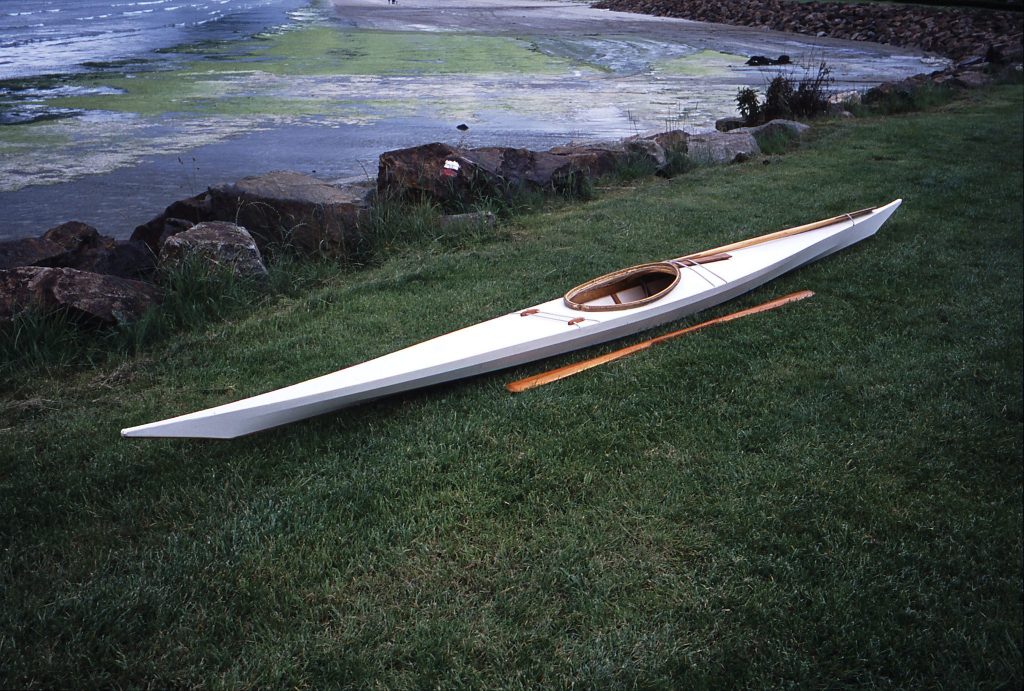 But it goes much further back than that, to naturally evolved forms such as the egg.

Dr. Stephen Levin asserts that the musculoskeletal system of the human body (and other creatures as well) is actually a tensegrity structure.

What is special about tensegrity structures?

In them, every component is critical and none are extra. In fact, adding extra structure to a stable tensegrity sculpture can result in new modes of failure, in components touching or becoming slack.

This sounds kind of like a perfect artwork. No need to add anything, and nothing can be taken away.

This can be a small target to hit, so it is good to have a lot of arrows, otherwise known as many starts. 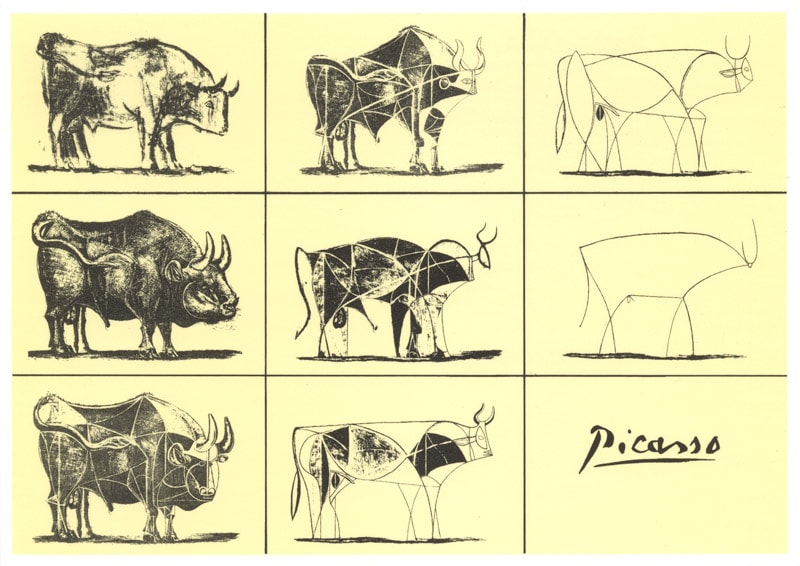 The Bull- Tension between detail and essence- Pablo Picasso