The Adjacent Possible In Art & Life 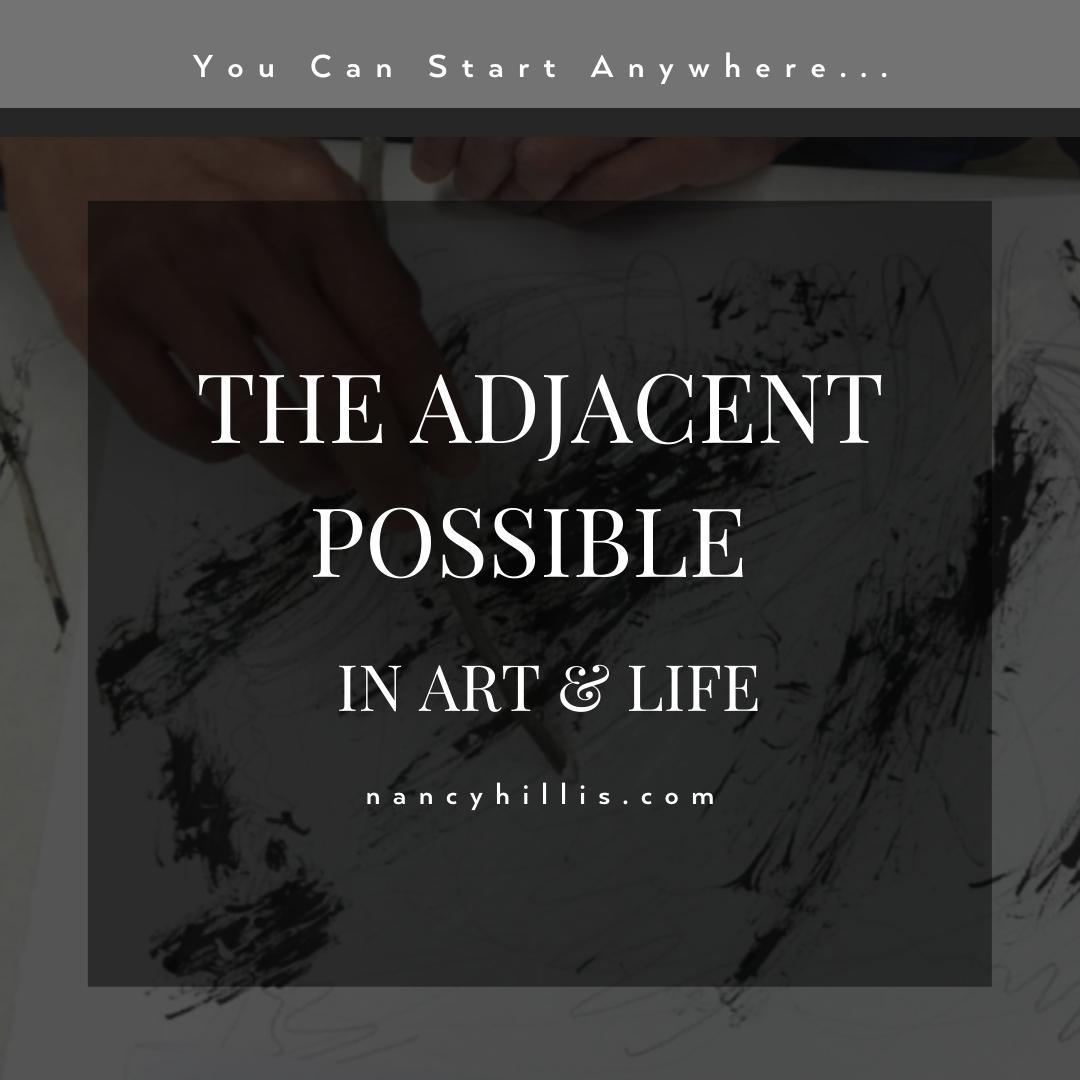 The Adjacent Possible In Art & Life

In the adjacent possible, your act of creating affects existence itself.

The adjacent possible is a concept from evolutionary biology and theoretical physics, a conceptual framework to understand systems capable of modifying and transforming themselves.

More specifically in an artistic context, it is the idea that each step you take, each mark you make as you create illuminates several possible steps forward that were not only invisible before but did not exist before you took that step because you also changed the context of your creative step. This is the nitty-gritty of creation and creativity.

Your action not only changes the environment you are in, but it also creates it.

In artistic creativity, you physically modify your creation by, for example, adding a brushstroke or subtracting marks and shapes, or adding clay to your sculpture or chiseling away at the marble.

You might change a harmony or add passing tones to a melody. These actions change how you perceive your creation, so you have a modified creation in a modified context. It is co-construction; it is co-evolution.

You are continually developing your work as an artist and creator.

The Adjacent Possible is akin to Heisenberg’s Uncertainty Principle in physics, the concept from quantum mechanics that your act of observing something changes what is observed, yet it is even more subtle and broad than that.

A couple of other key concepts “ride shotgun” with the idea of the adjacent possible and are essential companions on our journey. These are phase transitions and poised instability.

Phase transitions are another idea from physics, the observation and attending theory about how matter changes forms, such as ice to water or vice versa, but still remains the same stuff. These transitions are characterized by a kind of suddenness–ice remains ice until the melting point, not a degree lower or higher. 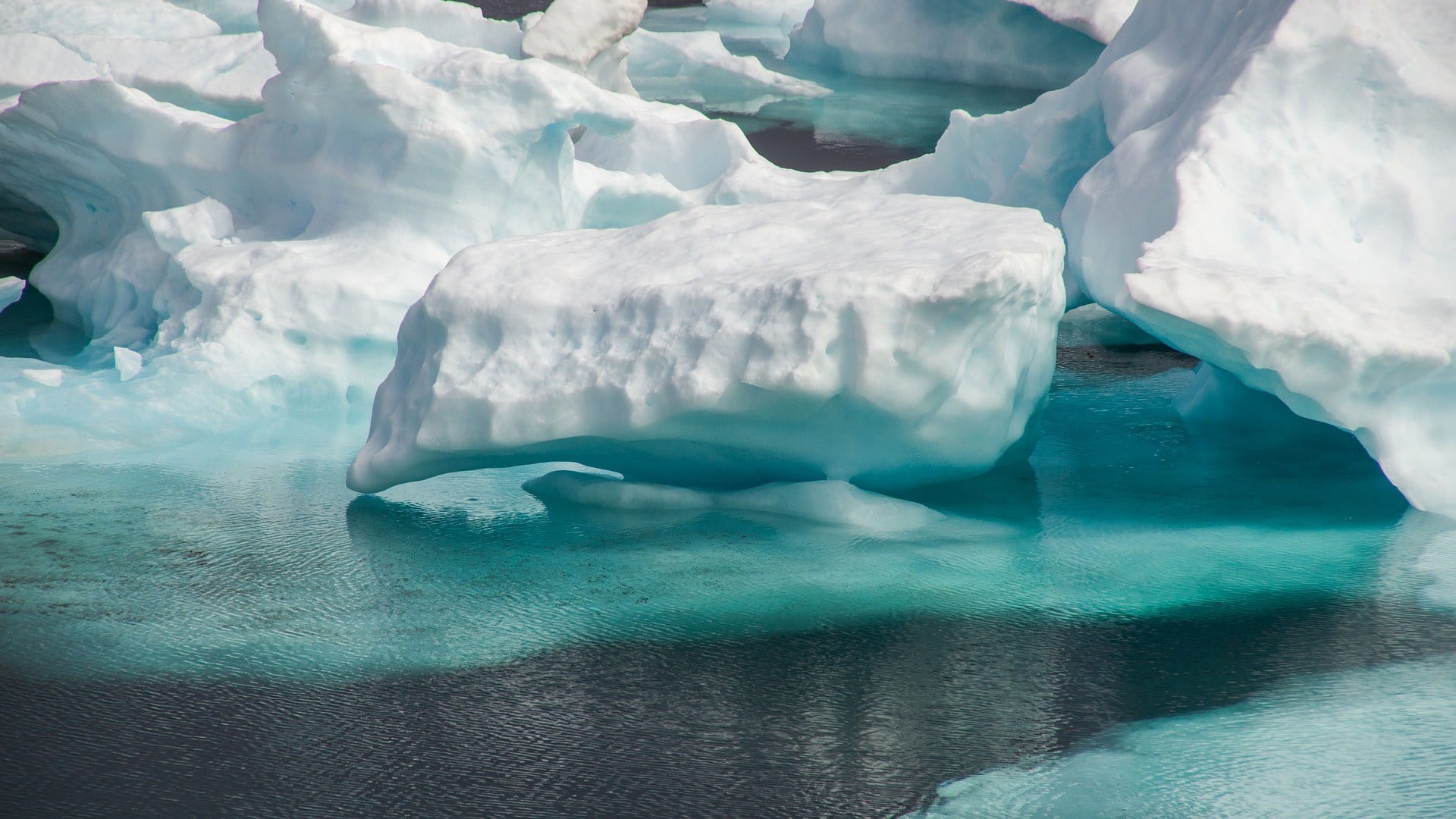 The creative analogy of a phase transition is an artistic breakthrough. At the “melting point,” we have elements of two realities co-existing­–your old worldview and the beginnings of a new worldview interspersed like pockets of meltwater in a block of ice.

But, unlike a block of ice, you are a conscious being who is trying to make sense of this. You have the power to engineer your own transformations aided by insights from nature and your accumulated artistic experience. You can choose to unfreeze yourself.

We believe that sense-making requires incorporating your new emerging worldview into your old one and thus synthesizing a new one that is adjacent to what you had before. Far enough away to be different and perhaps surprising, yet close enough to incorporate and make sense of.

This requires living right at the edge of a phase transition, something that is not easy to do. We’re here to help.

Skating along the edge of two ways of being is an example of poised instability.

An example of a physical system that demonstrates this is an underwater rock in a stream. Water flows smoothly over the first part of the stone, but then turns to froth for the downstream part. The break point between smooth and turbulent flow shifts back and forth but stays in the same neighborhood, roughly stabilized by the presence of the rock.

This phenomenon is persistent because it is structural in nature– the rock is firmly planted in the riverbed; the water is moving at the right speed and depth. 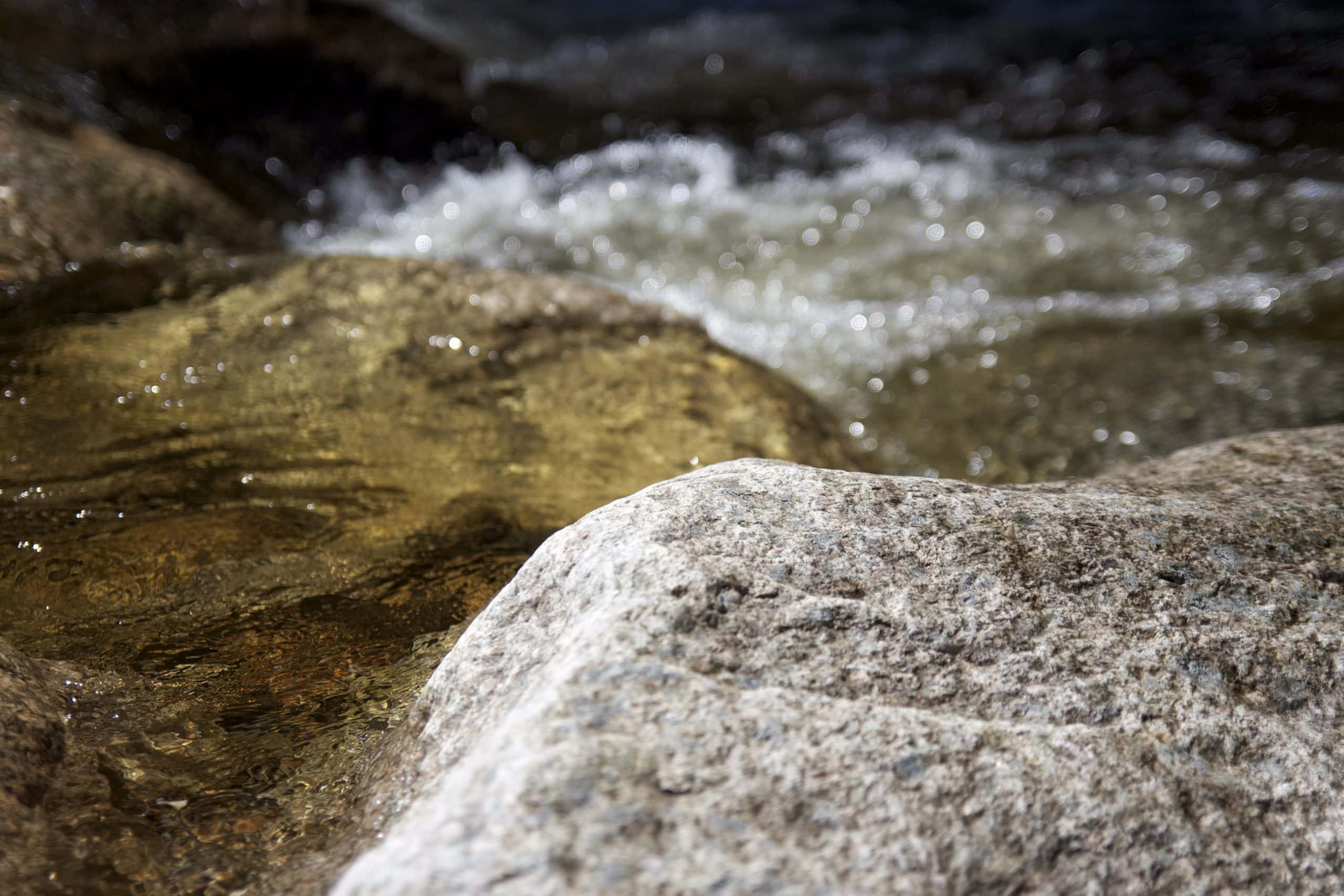 A more human-centric example is a classic computer science problem, that of “broom balancing.”

Have you ever tried to balance a broom on your hand with the brush part straight up in the air and the handle resting on your flat palm? It takes a lot of hand moving and is hard to keep going for more than a few seconds. It is fundamentally unstable and requires effort to maintain.

As creatives, we seek ways of living at this boundary of the known and unknown because that’s where creativity flourishes.

We need elements of the smooth and predictable as well as the turbulent and unpredictable. We need structure that will keep us in the sweet spot like a rock in the riverbed.

We see examples of poised instability in the life/death/life cycles of nature.

Nature is continually in the dynamic balance between creation and collapse. There is endless churn accompanying endless creativity, but there is also underlying structure that emerges from the interplay of the two.

Have you ever played a game of Jenga? So carefully put together, so suddenly a pile of wooden pieces. Why do so many things collapse quickly but grow slowly? How do we contrive to stay at that exciting place of possibility?

Life On the Edge

Like so many things in life, there’s a trade-off. Poised instability is unstable, it’s easy to drop the broom or fall off the surfboard into the water, but it also means you have many options in front of you.

You can go many different directions because you are not firmly embedded in any one direction. There’s a trade-off between having lots of possibility and having stability and predictability.

If you go too far in the direction of stability, it kills off possibility. If you play it too safe, it becomes static. You start doing the same thing, emulating yourself. Saying: Oh, this works. I’ll just keep doing that.

But there’s a sweet spot, a jump-off place for exploring many possibilities.

A Story of Poised Instability and Surfing

We live in coastal California, and Bruce is a surfer. He says he’s not a good one because he started at age 47 unlike many of the locals who have long since logged their ten thousand hours by starting at seven years old or whenever they could find a small enough wetsuit, but he still gets enjoyment out of it.

One of the things you find when surfing is that you are continuously interacting with the environment. You’re making decisions every second, faster than you can verbalize them, kind of like the broom balancing example. You’re poised in a dynamic equilibrium.

Surfing is rich in metaphors for this situation, which is why surfer slang has permeated the culture so widely. The language has proliferated because it is useful, concise, and descriptive of many of life’s eventualities beyond the water.

Surfing brings out the dynamic tension between two strategic philosophies–There is the “I’m doing it my way” philosophy (apologies to Frank Sinatra) which runs head-on into the dynamics of natural forces with unsatisfactory results. There is the “Go with the flow” philosophy, which leads to bobbing in marginal waves, missing many potential good rides.

Bruce discovered a sweet spot between those two philosophies, one that is simultaneously determined and adaptive, living at a place of poised instability. Only there does one progress as a surfer.

It reminds us of an aphorism he heard a Buddhist friend say– “Hang on tightly, let go lightly.” 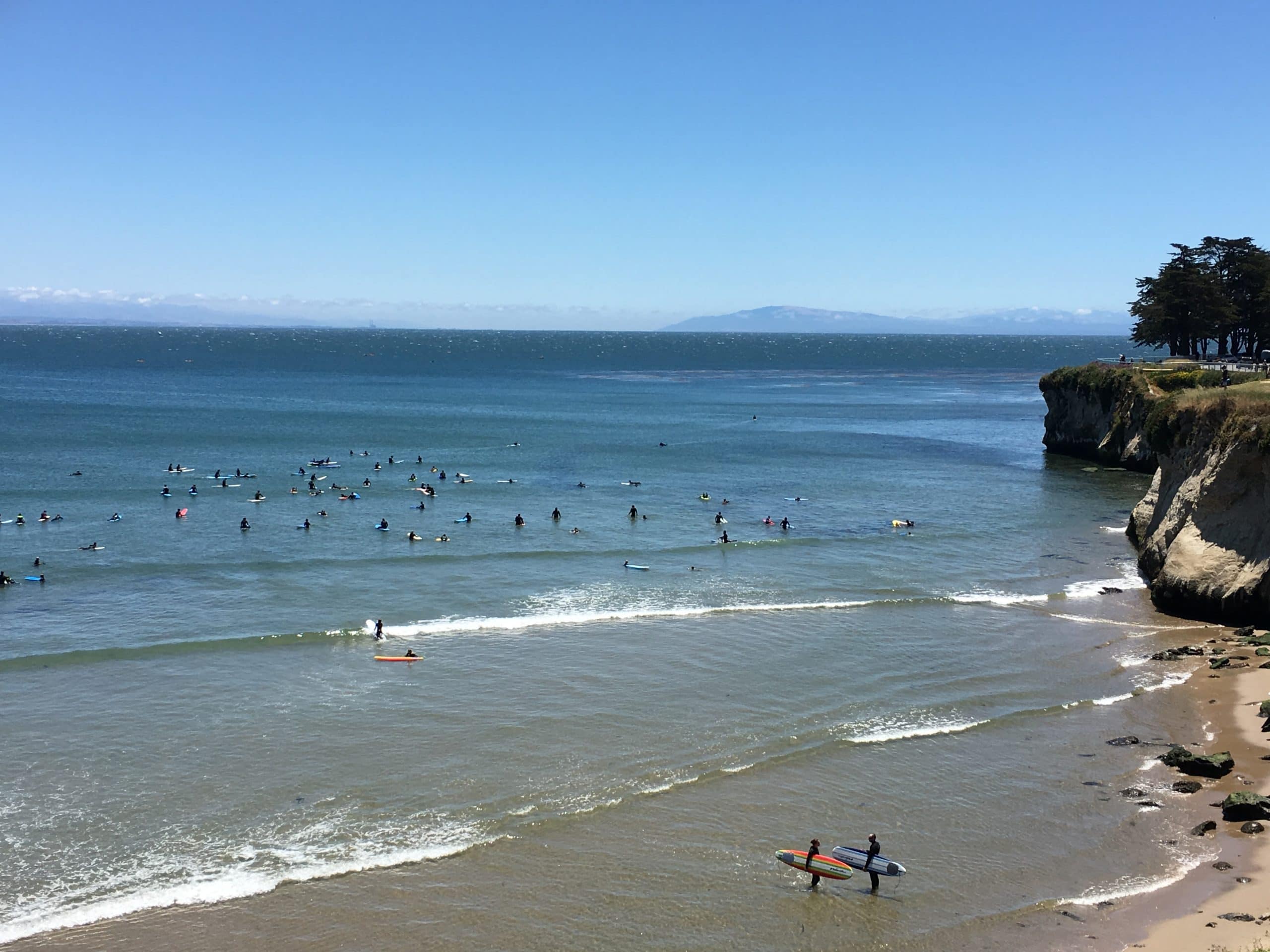 The Inner Journey of Creativity

Over the course of two decades of guiding artists and creatives, we’ve seen a ubiquitous pattern in the creative life cycle of being an artist. This is the centrality of the Inner Journey that affects everything in your art and life.

The alpha and the omega of art and life is your inner journey- it’s essentially your hero’s journey- your ability to say yes to that which calls you, even though you face perils like self-doubt, inner criticism, and procrastination. This is about your psychology, your mindset, and your ability to trust yourself to say yes to your dreams.

Working with artists over the years, I observed overarching patterns in the life cycle of being an artist that profoundly affect one’s art. There is a crucial progression from emulating others, to moving past emulating yourself, to finally expressing your own unique art.

This is what we explore in our forthcoming book: The Adjacent Possible: Guidebook & Stories Of Artistic Transformation.

Be on the lookout- it’s coming soon!