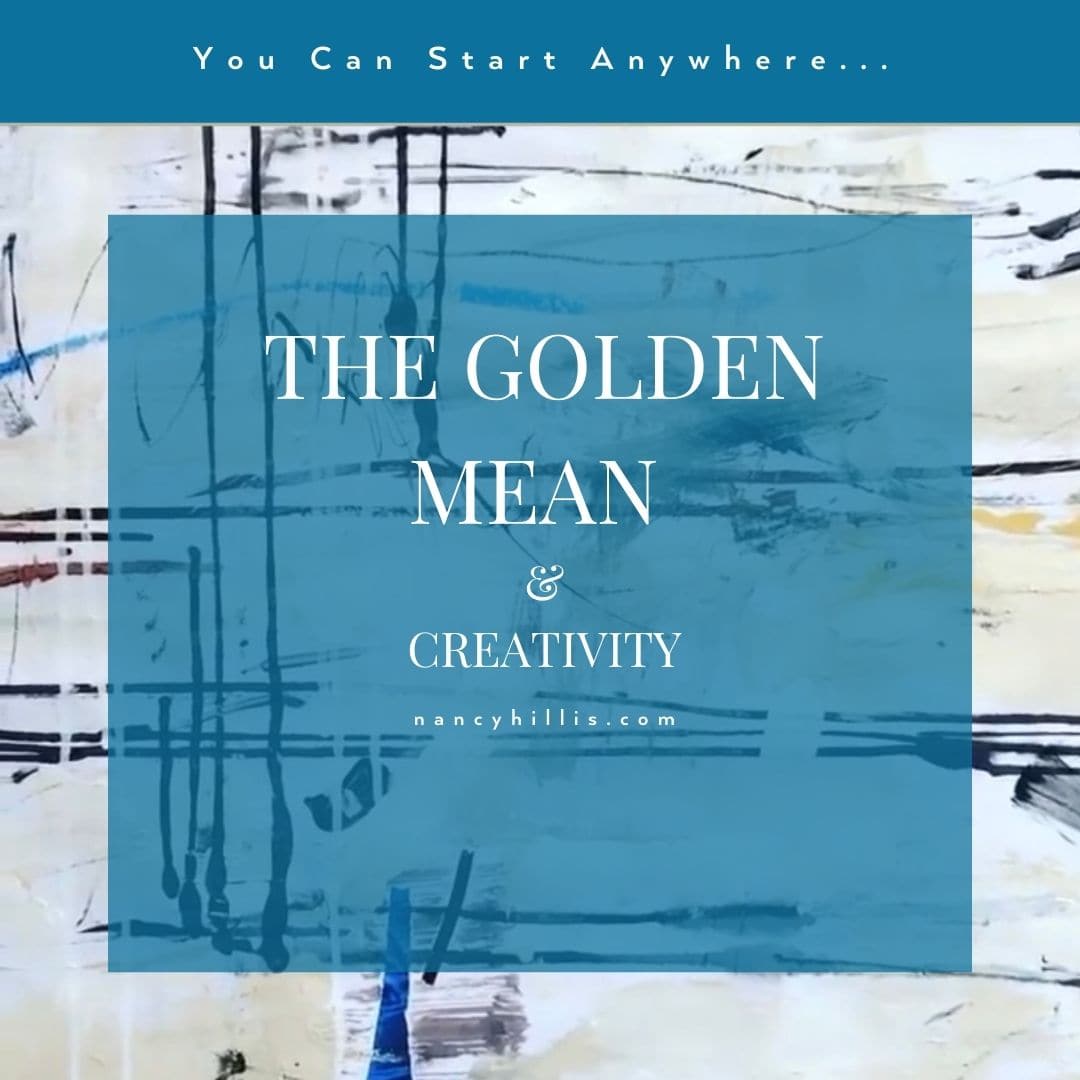 The Golden Mean & Creativity- This post is informed by conversations with Dr. Bruce Sawhill, Stanford educated theoretical physicist & mathematician. There is a video on fractals near the end of this post.

In your artistic explorations, you may have encountered the idea of the Golden Mean.

It has existential tentacles encircling philosophy, mathematics, art, and morality. It also extends back into Ancient Greek history.

But now we notice that the force of the good has taken up refuge in an alliance with the nature of the beautiful. For measure and proportion manifest themselves in all areas of beauty and virtue.

Art as the exaltation of beauty and mathematics in the guise of proportion are not only intertwined but connected with morality as well.

Any virtue taken to an extreme becomes a vice.

Virtue is connected with moderation, and could even be construed as being a kind of early optimization, of balancing opposing influences to get the best mixture of influences to create a desirable outcome.

The Golden Mean is related to the Golden Ratio, which at its root is a number representing a proportion, such as the ratio between the width and height of a painting or an object.

This Golden Ratio is a very non-intuitive number at first glance:

The dots at the end of the number mean that it goes on forever. It’s also called an irrational number that cannot be expressed as a simple ratio of two whole numbers like 5/8.

Even though there are many irrational numbers (the vast majority of numbers are irrational), all of them have approximations as ratios of whole numbers.

Moving Closer & Closer To The Purity Of Pi

The Golden Ratio has a very unusual property. It, of all irrational numbers, is the hardest to pin down.

The details of showing this are beyond the scope of this blog post, but they use something called a “continued fraction approximation.”  The Golden Ratio makes you work hard to achieve it!

It was first written about by Leonardo of Pisa, later known as Fibonacci, in his book Liber abaci, published in 1202. But its origins date back to 200 BCE in India, where it was developed to understand patterns in Sanskrit poetry (more connections of creativity and math!), as well as being discussed by Euclid.

If one starts with two numbers, our old favorites zero and one that we’re always wanting to go between, the beginning of the sequence looks like this:  [0, 1]

To create the next number, take the two numbers at the end of the sequence (this is why we start with a list of two numbers) and add them together.

These numbers have been used to understand a variety of natural processes, from the growth rate of rabbits (each new generation is created by the combined fertility of the two previous generations) to the shape of nautilus shells and the leaf patterns of some plants. 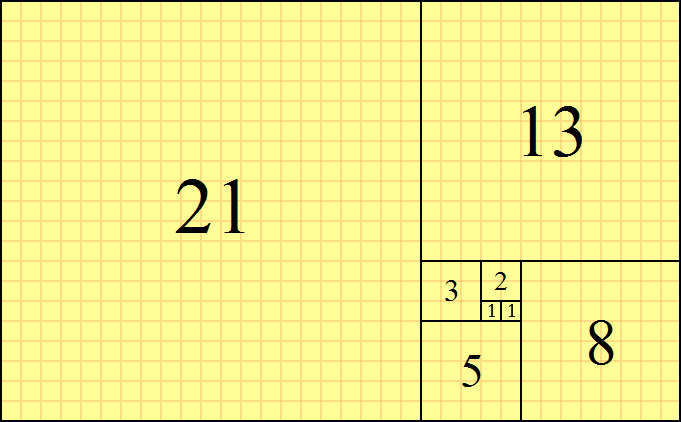 Fibonacci sequence as a mosaic of squares

Now connect those squares with a spiral curve

It looks strikingly like this cross section of a nautilus shell, even though it curves right instead of left like the above picture. 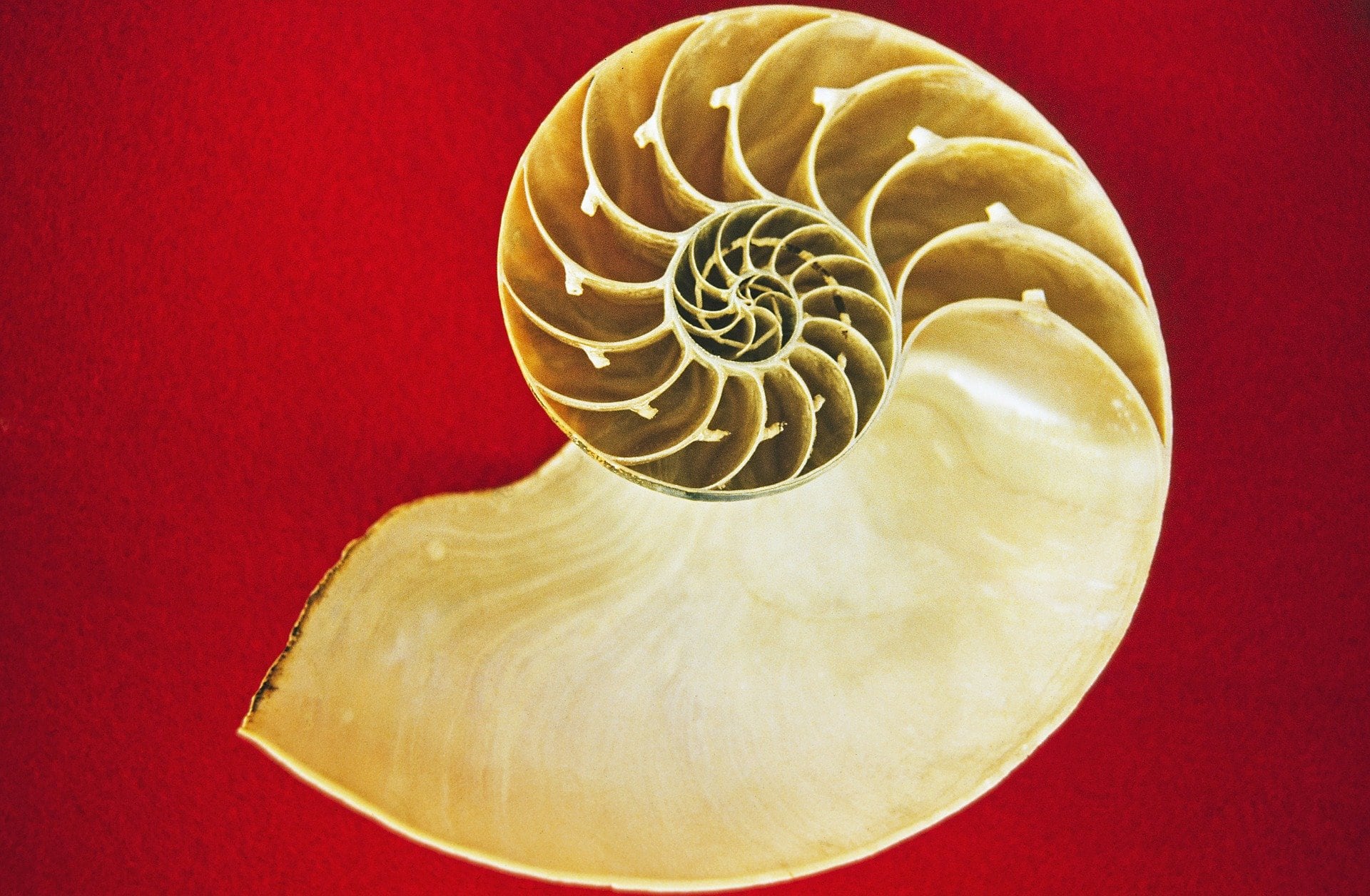 Nature reflects art and art imitates nature, with math as its guide.

Birthed by the midwife of mathematics we see art reflected in nature. Art is a process of human thought, humans are part of nature and we understand these patterns both intuitively and through mathematics.

It turns out that the *proportion* of each Fibonacci number to the one behind it is a better and better approximation to the Golden Ratio, and is closing in on it as efficiently as possible!

No pair of numbers in the sequence does a particularly poor or great job of closing in on the Golden Ratio.

Each successive ratio shaves off about the same fraction of the remaining distance.

The task is very equitably spread out.

As in life, everything matters, and there is no faster way to do it in terms of ratios of integers.

If we take the 4th Fibonacci number and divide it by the 3rd, we get 2/1 = 2.  Not a very good approximation to the Golden Ratio.

Like a kind of mathematical missile targeting system, the approximations alternately undershoot and overshoot while getting closer and closer to the target.

Each approximation gets better, but no single pair of numbers gets a huge improvement at the expense of some other pair getting a lousy one as happens in the case of Pi.

It’s all very equitably spread out, a very moderate kind of behavior. Aristotle would be proud. 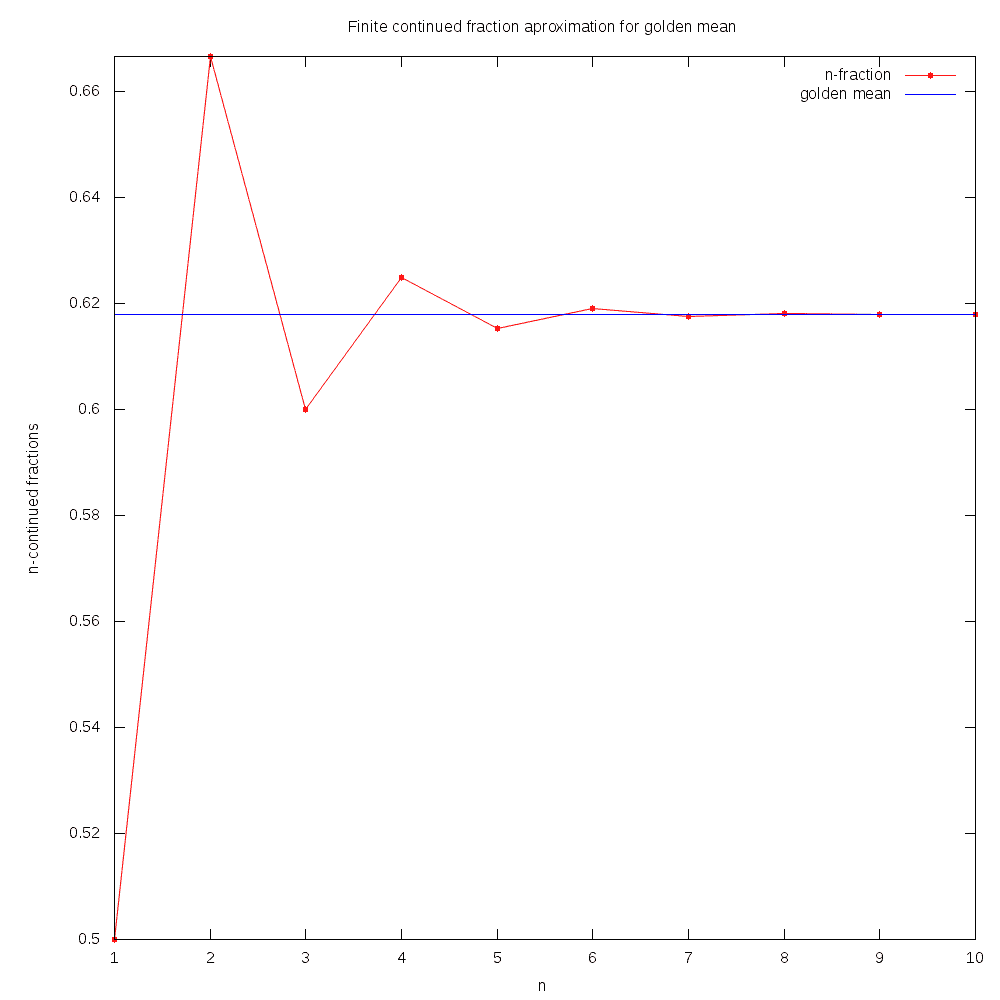 In a previous blog post, we discussed fractals, remarkable patterns that look the same no matter how close or far you are from them, as exemplified by the snowflake (Koch) curve.

The Golden Ratio is also deeply connected with fractals.

In the Studio Journey Masterclass this spring, Bruce delighted us with a surprise talk on how mathematics can illuminate the underlying structure in the seeming chaos of Jackson Pollock’s paintings.

Watch the snippet from Bruce’s talk: 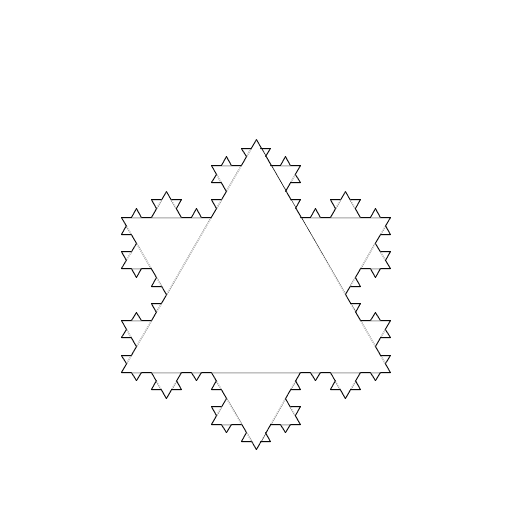 If one starts with a rectangle and then slices off one side, one can ask:

What should the proportions of the rectangle be such that the sliced off rectangle has the same proportions? (though rotated by 90 degrees)

And then one could repeat the process with the sliced off rectangle and get a slice off the slice, and so on ad infinitum.

If you do that, it looks like the Fibonacci squares above. In the picture below, we want the proportion of the long side of the rectangle (a+b) to the short side (a) to be equal to a/b. 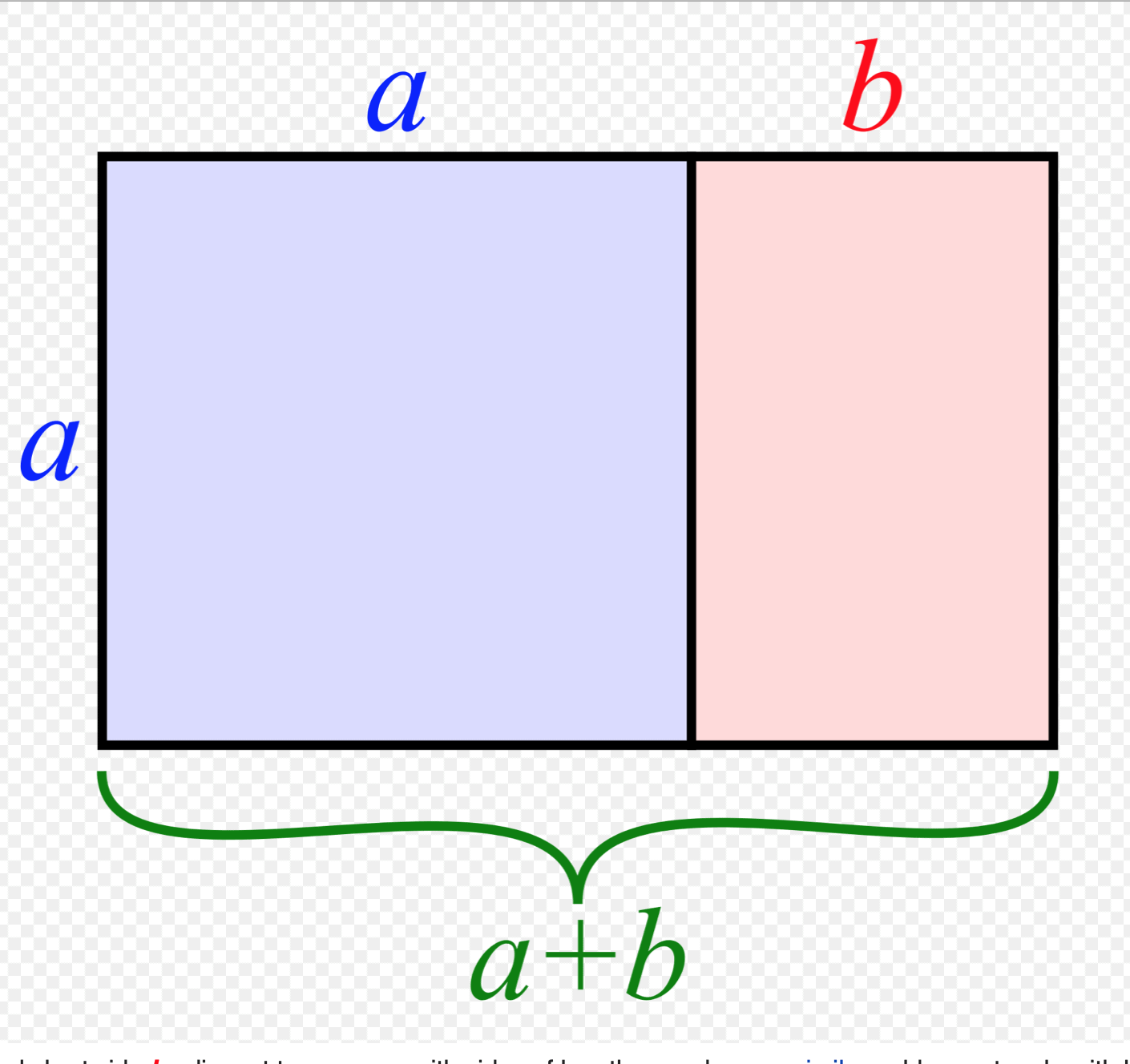 Math and art don’t seem so far apart when one thinks of both of them as being about patterns and relationships, not about numbers and equations.

Saying math is about numbers and equations is like saying art is about paints and canvas. True but missing the deeper point.