Creativity, Complexity & The Search For Resolution 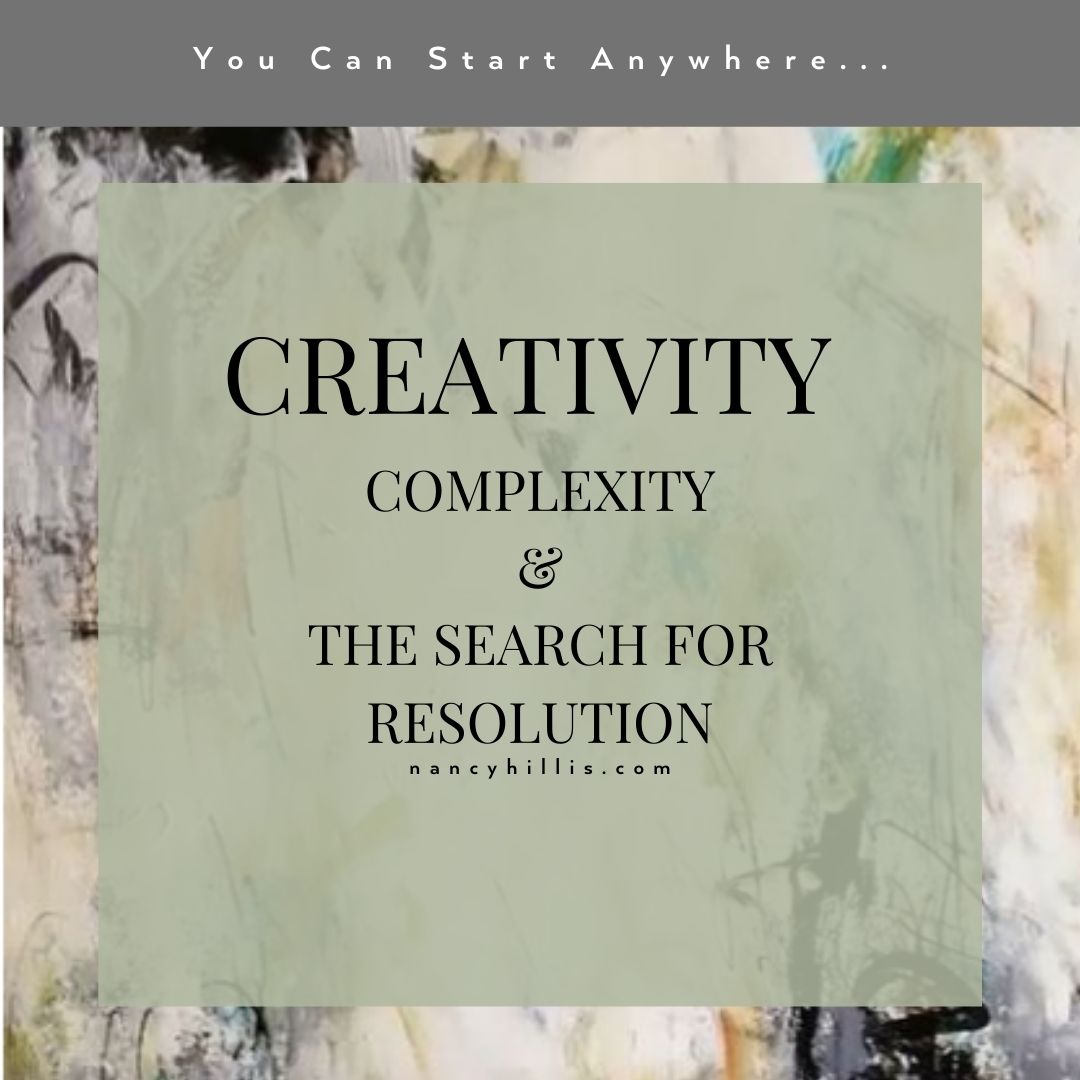 Creativity, Complexity & The Search For Resolution

Art takes us to a place of not knowing. It will not be reduced to a simple yes or no.

We yearn to express the ineffable, inarticulable and mysterious in our art, yet paradoxically, we search for resolution in it as well.

We assert that what makes art challenging and interesting is that it is not easily resolvable.

What does resolvable mean?

It means to be able to put something into a box, a category, a class of thing. Once that is done, the item is no longer challenging, it is firmly ensconced in the realm of the “known.”

This applies to scientific and mathematical problems as well as artistic and musical ones.

Whereas scientific and mathematical problems are often found problems, challenges in the areas of creativity are often made problems, but they have underlying commonalities.

A musical example: The stretch of three centuries from 1600 to 1900 is often referred to as the “common practice” period, where composers of Western music had a set of agreed upon laws to work with.

These laws pertained to the structure of melody and harmony-what chords came in what order, what musical intervals were allowed in which contexts, and so forth.

Creating a composition generates challenges imposed by the constraints of the rules of composition.

One could start with harmony or start with melody or perhaps even both together, but either one generated constraints on the other one.

Music could be made richer by the use of several independent voices, but laws of counterpoint constrained how those could interact. The number of interactions of several voices rapidly becomes immense as voices are added.

In his last years, J.S Bach wrote The Musical Offering, a set of compositions that contain staggering complexity and artistry.  Easy listening they are not.

One of them, the Ricercar a 6, has six independent voices, a tapestry bewilderingly beautiful and overwhelming, abstract and strict.

The mastery required to resolve the self imposed constraints of making compositionally correct musical sense out of six voices is unparalleled, before or since.

It was intended for a new instrument called the pianoforte (piano), and the musicologist Charles Rosen called it the best composition ever written for the piano in a New York Times article.

After these compositions, European classical music took a new tack, because it was not possible to go further in the direction Bach had gone.

Underlying the structure of The Musical Offering are fundamental principles of freedom and constraint that occur in many avenues of human expression, some very remote from music.

I will use a very mundane example that does not require a musical education, but it will serve to highlight the interplay of freedom and constraint.

It harkens back to our discussion of ANDs and ORs in boolean logic, where ANDs close doors and ORs open them.

Since many of us are in lockdown due to COVID-19, an example from food delivery might be relevant. 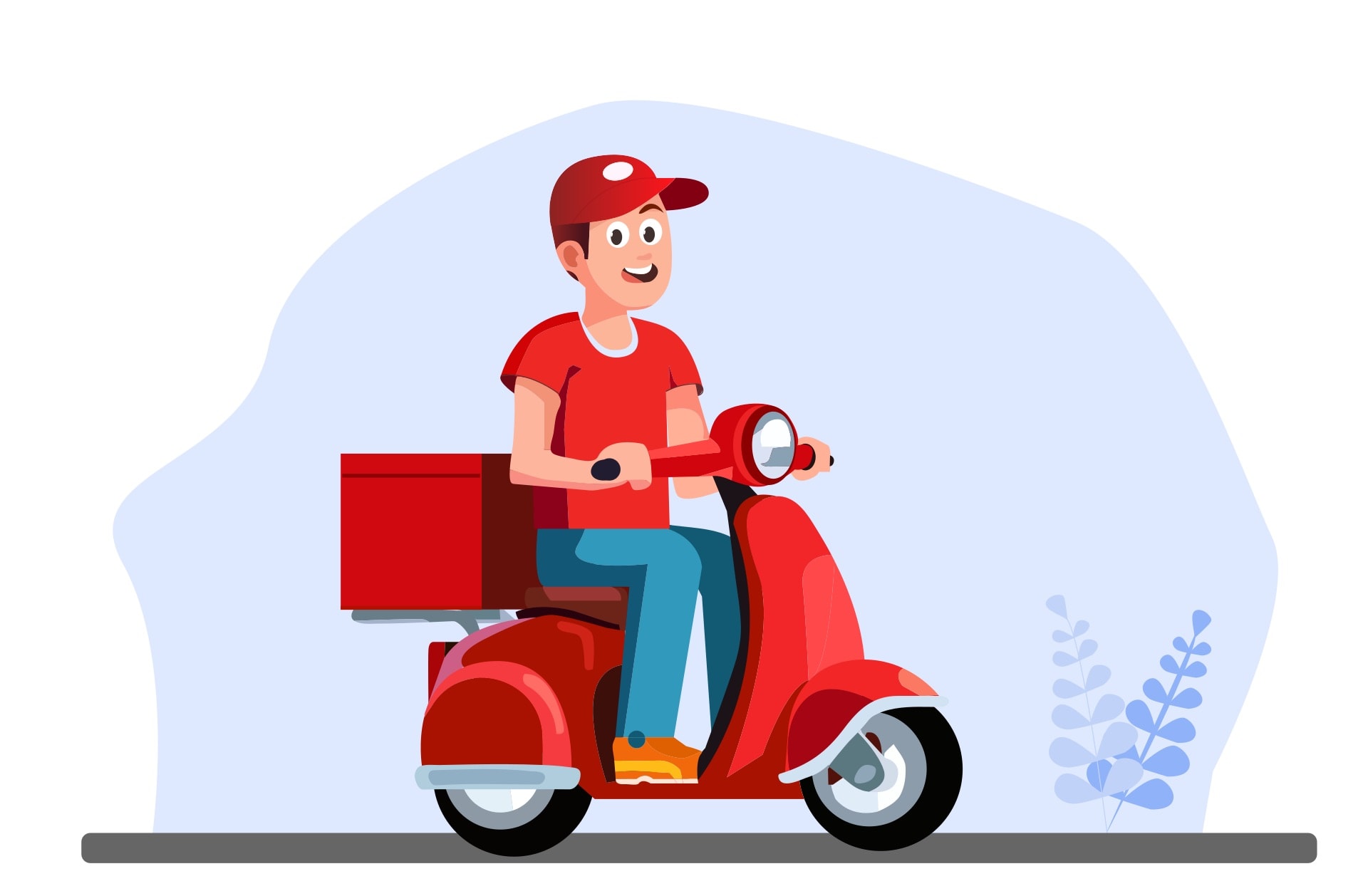 Let’s say you operate such a food service. You have 2 delivery people working for you.

Without any further details, we can gain some insight into the resolvability of this problem under different circumstances.

Let’s say 3 customers are scheduled for a delivery at the same time. Since we only have two delivery people, we know right off that it is impossible. Very little cogitation or ‘figuring’ was required to come to this conclusion.

On the other extreme, let’s say that we have 2 customers.  Since we can assign one delivery person to each customer, we know right away that we can do it.

Getting To Yes Or No

The two examples above are cases of “getting to yes or no as quickly as possible”, another way of saying “arriving at a resolution”.

They’re not very challenging because they didn’t require much thought.

There are many instances in life where we want to get to yes or no as quickly as possible, but art is not one of those instances.

We want art to hold our attention, not to get past it as quickly as possible.

In the food delivery example, imagine we have 4 customers, but they’re at different times and different locations.

We can’t say whether the challenge is resolvable without digging into the details.  How close in time? How far from each other? It might require pencil and paper to sort out.

This mundane scheduling problem underlies a deep phenomenon in all constraint satisfaction/optimization problems.

The difference between constraint satisfaction and optimization is that the first merely doesn’t break any rules whereas the second does a great job on top of not breaking any rules.

J.S. Bach was in the second category.

These sorts of problems have a phase transition associated with them, like ice to water or disconnected to connected networks.

An illustrative example from mathematics that edges into art is the “map coloring problem.”

In the 1800s, it was readily proved that any two-dimensional map could be drawn in at most 5 colors with the result that no two adjacent countries on the map are the same color.

Here’s a map of the United States, in this case an 6 color map, showing one of the approximately 20 trillion ways that it can be colored. 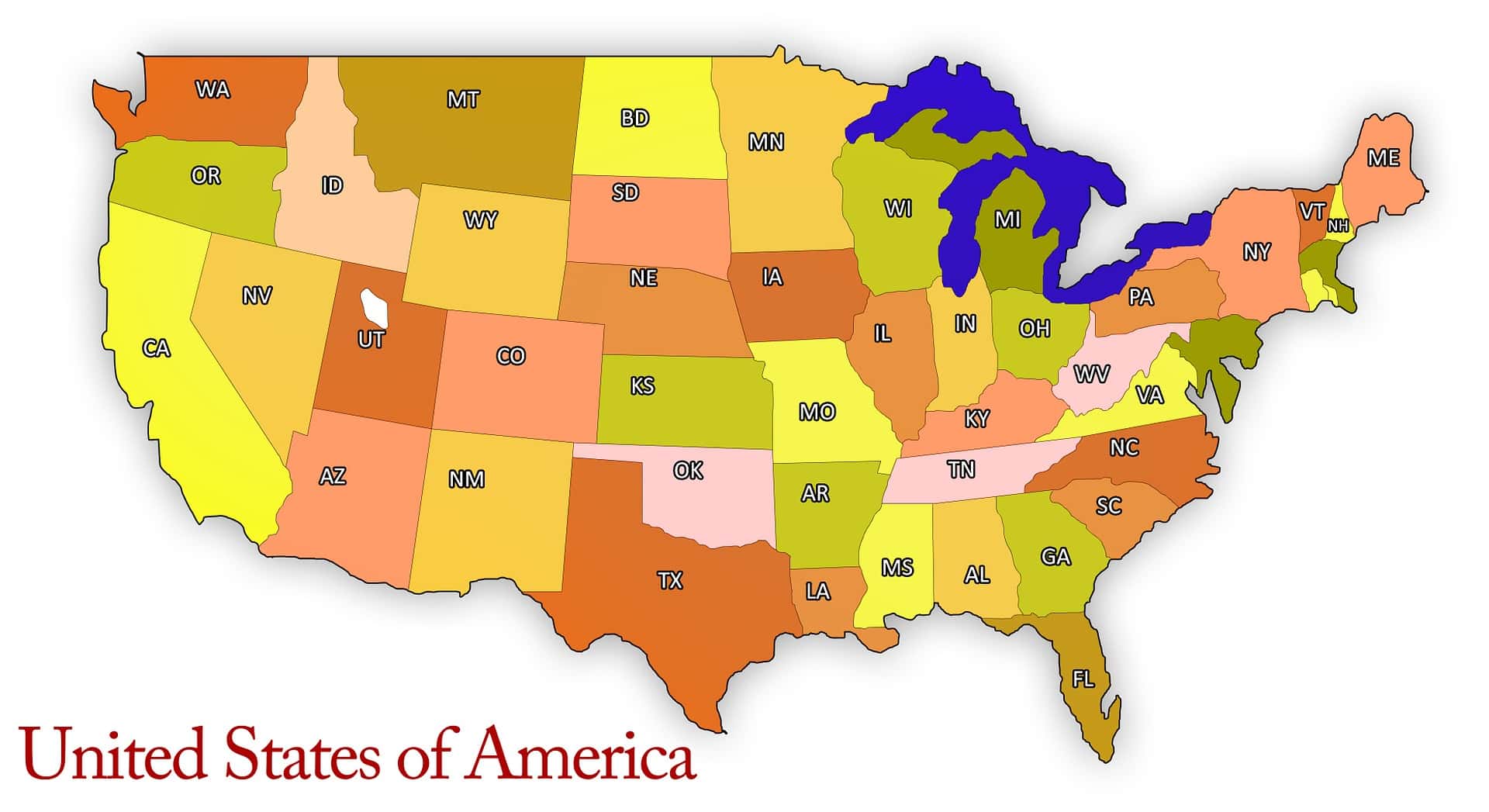 Lack Of Constraint Leads To Chaos

On the other hand, here’s what happens to the map when you throw constraint out the window. Here’s a 50 color map. 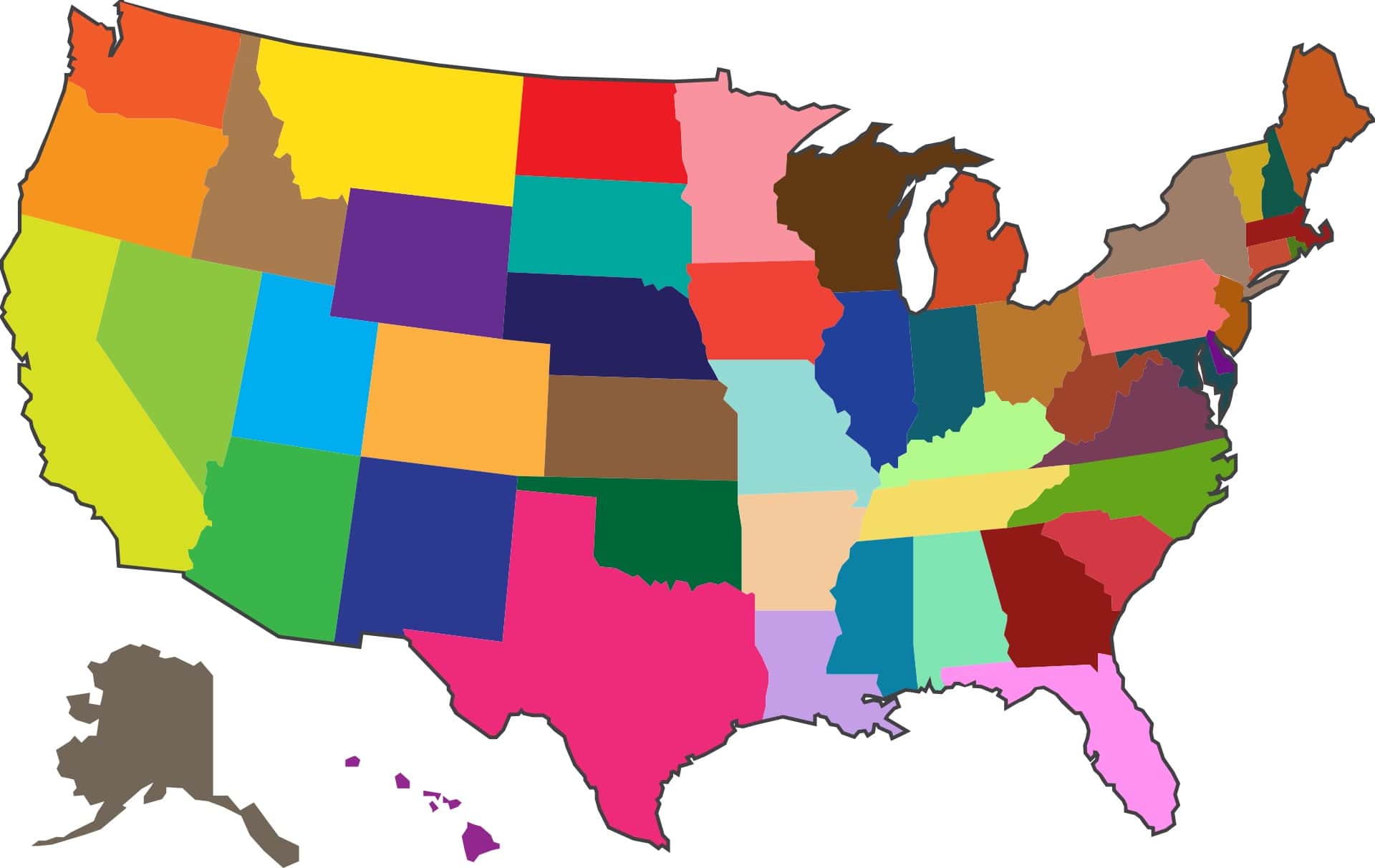 While it’s pretty, it’s rather chaotic as there is no underlying unity of color. The number of ways of assigning 50 colors to 50 states is 50! Factorial.

I’m not going to try to say that number!

There is a kind of arbitrariness in too much artistic freedom.

But we digress…let’s return to the subject of constraint.

It doesn’t take a huge stretch of the imagination to realize that something like Mondrian’s painting below could be a self-imposed compositional constraint for an artist. 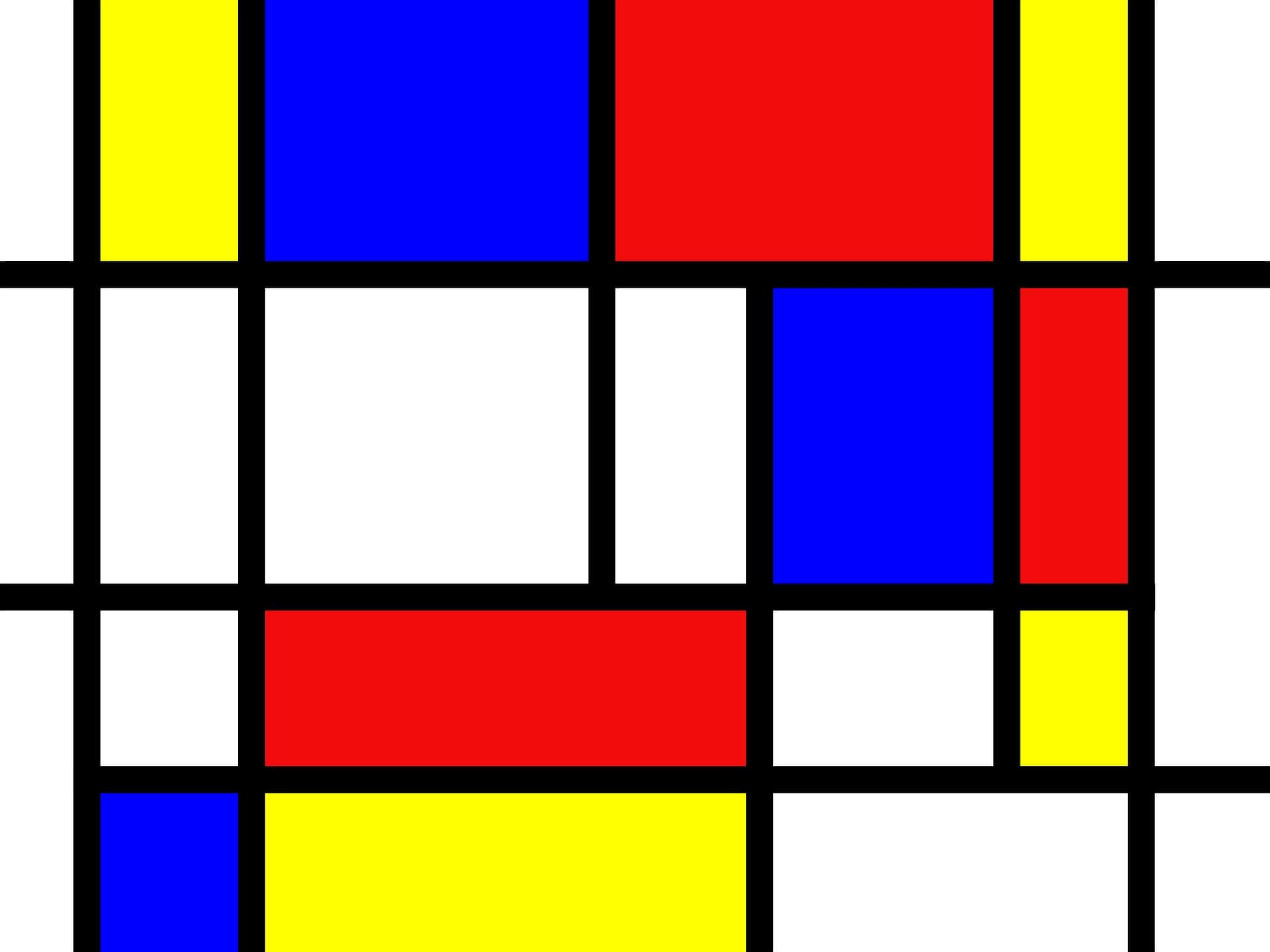 Here’s an example. It could pass for art in a museum. 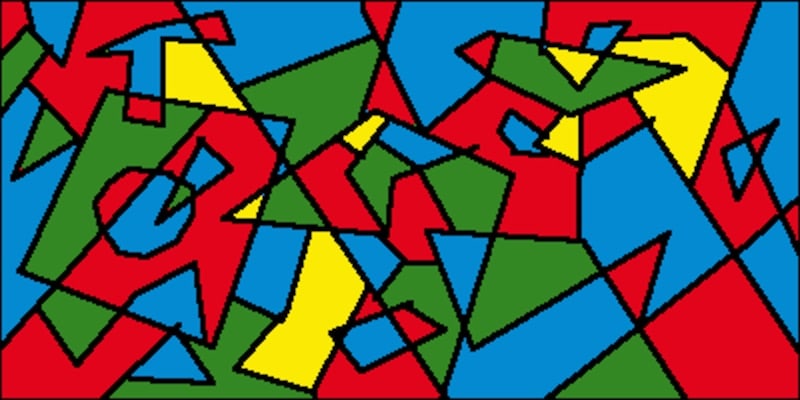 Incidentally, the computer code that generated the synthetic map above uses a technique called “backtracking.”

It is the most efficient way in terms of computational effort to solve the map coloring problem. The details are not relevant here, but what it means is that the computer program tries to color the map, one country at a time until it runs into an inconsistency.

In other words, it breaks a rule of composition. Then it undoes its work and tries another path, repeating until the map is successfully colored with four or fewer colors. Sometimes this takes lots of backtracking!

For those of you that think that computer programs move with calm implacable surety towards a goal without “do-overs”, this is counter-evidence.

In general, the most efficient way to solve complex problems involves something like backtracking- dead ends and dice-rolls are part of the deal, even if you’re made out of silicon! This is not a human failing, it is deeper than that. It is woven into the nature of complexity and constraint. The Minotaur would be proud.

There was a conjecture floating around for a long time that all maps could be drawn with at most 4 colors.

This is a stronger constraint than 5 colors.

This problem was eventually solved in the affirmative, but it was so complex that it required a computer to check all of the possible cases and more than a century of challenging thought to crack.

Mathematicians with a purist bent were initially suspicious of anything requiring a computer, but after a few decades of persuasion, they came around.

If we look at this landscape of solving problems, there are the easily accessible regimes of “obviously true” and “obviously false.”

But in-between these “duh” regimes is a grey area, like going from the 5 color map problem to the 4 color problem. This grey area requires figuring, digging into the details, computation, thinking. It compels you to latch on, wrestle with it, and not let go.

And something amazing happens in that gray area.  In the formal study of constraint satisfaction, there is an explosion of the amount of computation required to get to yes or no, the “satisfiability problem” we’ve alluded to earlier.

And something amazing happens in that gray area.

In the formal study of constraint satisfaction, there is an explosion of the amount of computation required to get to yes or no, the “satisfiability problem” we’ve alluded to earlier.

Below is a picture of the amount of computation required to get to yes or no for randomly created problems with varying amounts of constraint. 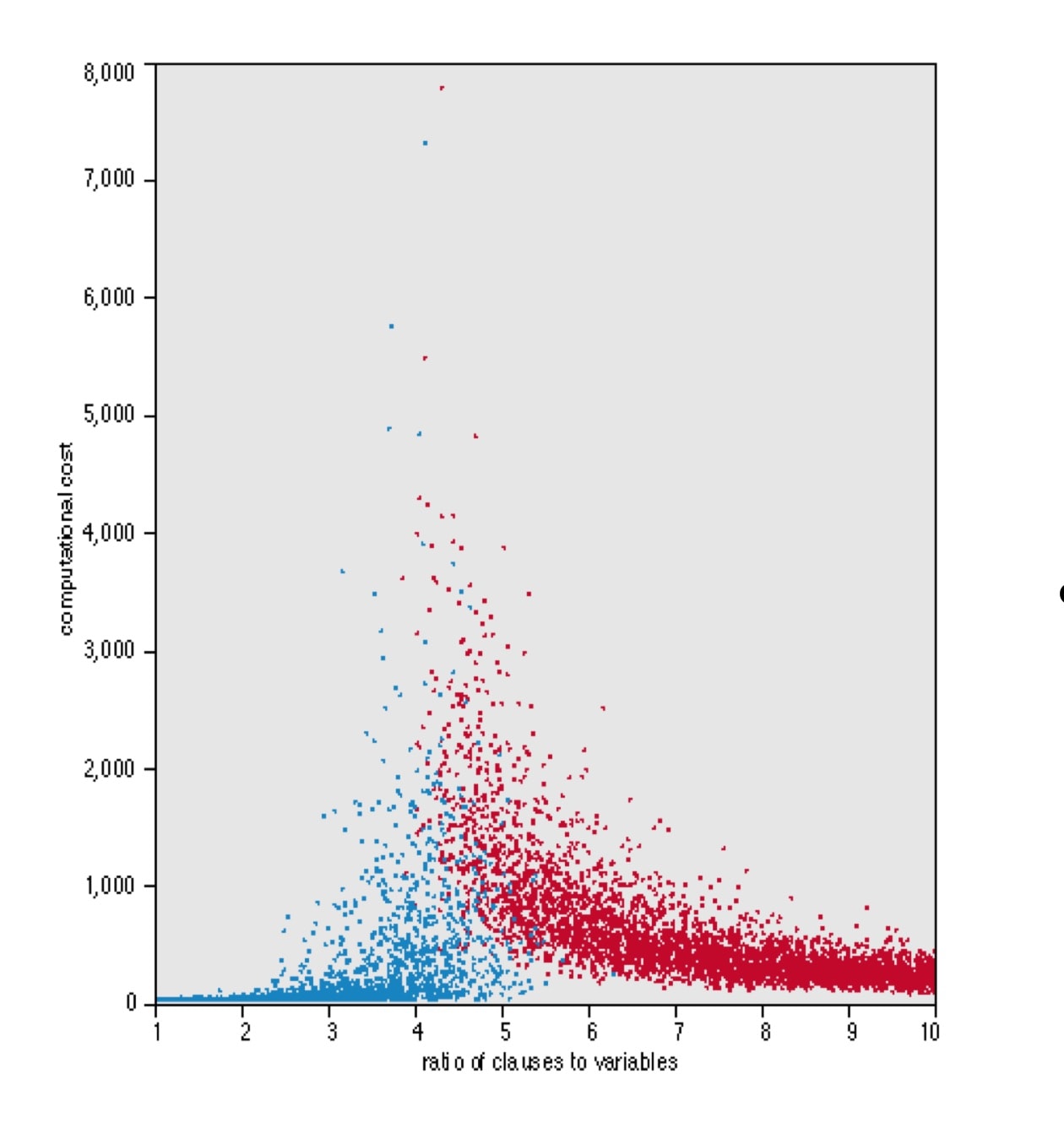 On the left are blue dots, which mean “yes” or “True” in a constraint satisfaction problem. This is the regime of few constraints.

The amount of computation is very low, so it is like the two jobs for two delivery people. Easy to say yes.

On the right side are red dots, meaning “no” or “False.” Oppressive constraint rules. Again, getting there is quick.

But in-between is a mix of red and blue.

And the dots have significant altitude, meaning it takes a long time to get to yes or no, sometimes thousands of times longer! There is a phase transition between red and blue, but the real gold is right at the boundary. Don’t hurry on through like other phase transitions, but stop and pay attention!

The resolution at this point is anything but immediate. Maybe yes, maybe no, I’ll get back to you.

We assert that this is what is going on in our minds when we experience art.

We try to resolve art into something meaningful, and it is hovers at the boundary of resolvability. It places us and keeps us in a place of “not knowing.” It simply won’t be reduced to yes or no.

And, perhaps, natural systems evolve to live at this boundary of true and false, with no resolution ever permanent.

P.S. Leave us a comment. Meanwhile, if you enjoyed this post, you might like my recent interview on Book Lover’s TV by Daniel Hall. You can see it by clicking on the arrow below.

You can also view the interview on Roku, Amazon Fire TV or Daniel Hall’s YouTube Channel.