As we approach January 6, I’m reminded of Epiphany, a time of historical, religious and celestial significance, which serves as inspiration for this blog post.

Epiphany, the time that marks the latest sunrise of the year in the Mediterranean latitudes is also noted by the Catholic celebration of the Magi.

I’m fascinated with this confluence of the religious celebration, the celestial phenomenon of the latest sunrise, the connection to creativity and the roots of the word epiphany.

This post is part of an ongoing conversation on the intersection of creativity, art, psychology and science with my partner, the polymath Dr. Bruce Sawhill, who is a physicist, mathematician, musician, composer and inventor.

Epiphany, from the ancient Greek ἐπιφάνεια, epiphanea, “manifestation, striking appearance”, has been described as an experience of a sudden and striking realization.

The word is often used to describe a creative or scientific breakthrough, a surprising revelation of something new and inspiring or even when something is understood and seen with fresh eyes in a novel and deeper way.

Newton and the apple is a classic example.

Another example is the story of Albert Einstein. In 1905 he was trying to reconcile Newtonian physics and Maxwell’s equations describing electricity and magnetism.
He was riding a streetcar in Bern, Switzerland. He gazed at the town clock tower as the streetcar receded from it.
As he looked back at the clock tower, he wondered what would happen if the streetcar were moving close to the speed of light. He postulated that time would move differently. Indeed, time would be affected by extremely high speeds.
Time would appear to slow down.
Later, Einstein said:

A storm broke loose in my mind.

This reminds me of the poet William Butler Yeats’ line from The Wandering Aengus:

I went out to the hazel wood,

Because a fire was in my head

Einstein’s thought experiment, this thought storm, his explosion of creativity, led to his formulation of the theory of special relativity.

In a previous blog post we discussed the importance of seeds, and how much happens before the sudden reveal of new life bursting forth.

There is a great deal going on invisibly, underneath the surface of things.

So now I ask you to hang on tightly, as we are going to make a leap from ancient mysticism and religion to modern science, for the purpose of understanding the relationship between the suddenness with the gradualness of epiphanies.

To do so, I’d like to introduce you to two mathematicians, Paul Erdös and Alfréd Rényi, Hungarians who studied objects called graphs, which are merely abstract collections of dots and lines connecting those dots.

They studied dots and lines for much the same reasons abstract artists do. Dots and lines are beautiful, compelling and generate interesting patterns.

To take this a step further in order to make the abstract more accessible, we introduce the thought experiment of buttons and threads.

Imagine scattering a handful of shirt buttons across the floor. Spools of sewing thread are on hand.

Now, close your eyes and search with your hands randomly until you feel the surface of two buttons.

Tie the two buttons together with your thread.

Repeat this until you feel that most of the buttons are connected.

It will likely take awhile.

Our Hungarian friends came up with an astonishing result in 1960.

They wanted to understand how the collection of disconnected buttons became one big tangle, which they knew would happen eventually if one continued attaching threads to the buttons.

It turns out that the gradual addition of increasing numbers of threads generates a *sudden* transition to a big connected bundle involving most of the buttons.

In science, this is known as a phase transition, and it occurs in a dizzying variety of contexts.

One well-known example is water becoming ice, a phenomenon that occurs suddenly at a very specific temperature.

Water, a liquid, suddenly crystallizes into a solid, ice.

Once crystallization starts, it tends to spread.

Graphically, the phase transition that Erdös and Rényi discovered looks like this: 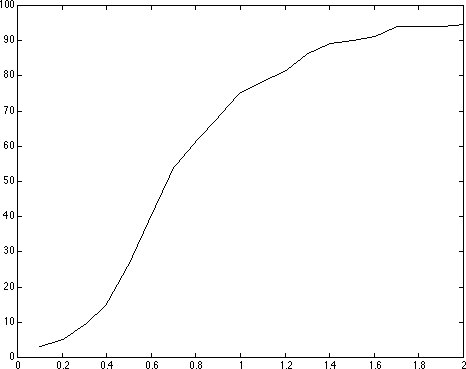 It’s definitely not a straight line!

Not much happens at first when you add threads, but then, there’s a sudden change- the curve rises steeply and you experience a phase transition from most buttons disconnected to most buttons connected.

On the curve above, as you move a little bit to the right, corresponding to adding a few threads, you get a big jump in connectivity. This is what’s going on in the steep part of the graph.

This is a sudden change. This is a phase transition.

What causes this phenomenon of phase transitions?

I want to introduce the idea that creativity and the relationship between creative practice and creative result is akin to a phase transition leading to epiphany.

The quietly invisible groundwork laid down by a disciplined creativity practice explodes forth one day as its disparate elements knit together, like a seed germinating and pushing forth into the sunlight.

But creative practice only appears to explode forth.

The paradox of this epiphany is that underneath this phenomenon has been a quiet and gradual marshaling of energies.

You cannot jump straight to the epiphany, you have to travel through the “not much going on” part of the creative process first.

This is the nature of the creative life.

The 10,000 hours is a concept originally described by Anders Ericsson in his 1993 research paper The Role of Deliberate Practice in the Acquisition of Expert Performance.

However much talent and luck one has, there also seems to be a high correlation of spectacular success with spending hours upon hours at something in order to master it.

For artists, the 10,000 hours concept translates to miles and miles of canvas.

This 10,000 hours is like the flat part of the aforementioned buttons and threads curve.

At first there’s not much to show for all the hours you put into your work. The rewards are delayed but show up in an accelerated fashion later on.

It may not seem fair, but it seems to be how things work.

In order to take your art, your creations, your skills further, you’ve got to hold on through the early phases of development when you feel awkward and don’t see much reward.

It can be disheartening.

You face the dark night of the soul, over and over, wondering why you ever said yes to this endeavor in the first place.

This is the moment of greatest despair.

But it’s also the moment pregnant with the possibility of transformation. The transformation of finally trusting yourself even through the dark night, again and again.

Because the dark night will recur, even once you’ve mastered a subject.

Nevertheless, if you hang on and move through self doubt, trusting yourself in your daily practice, you’ll reap the inherent rewards of confidence, joy and moments of ease and creative flow.

You’ll be able to face the moments of self doubt knowing that you can move past it.

The grueling hours of facing disappointment, awkwardness and uncertainty will definitely be worth it in any case.

Does this sound compelling?

Can you imagine activating your most creative and meaningful life?

Can you imagine creating with abandon?

Can you imagine accessing the adjacent possible as you step into the unknown as you create?

Can you fathom that eventually, you’ll reach the moment of acceleration, the phase transition, the moment when your hard work comes together and you experience a sensation of creative flow?

Creativity is central to feeling alive

And it’s calling you.

Will you say YES to your dreams of expressing yourself and living your most creative life? 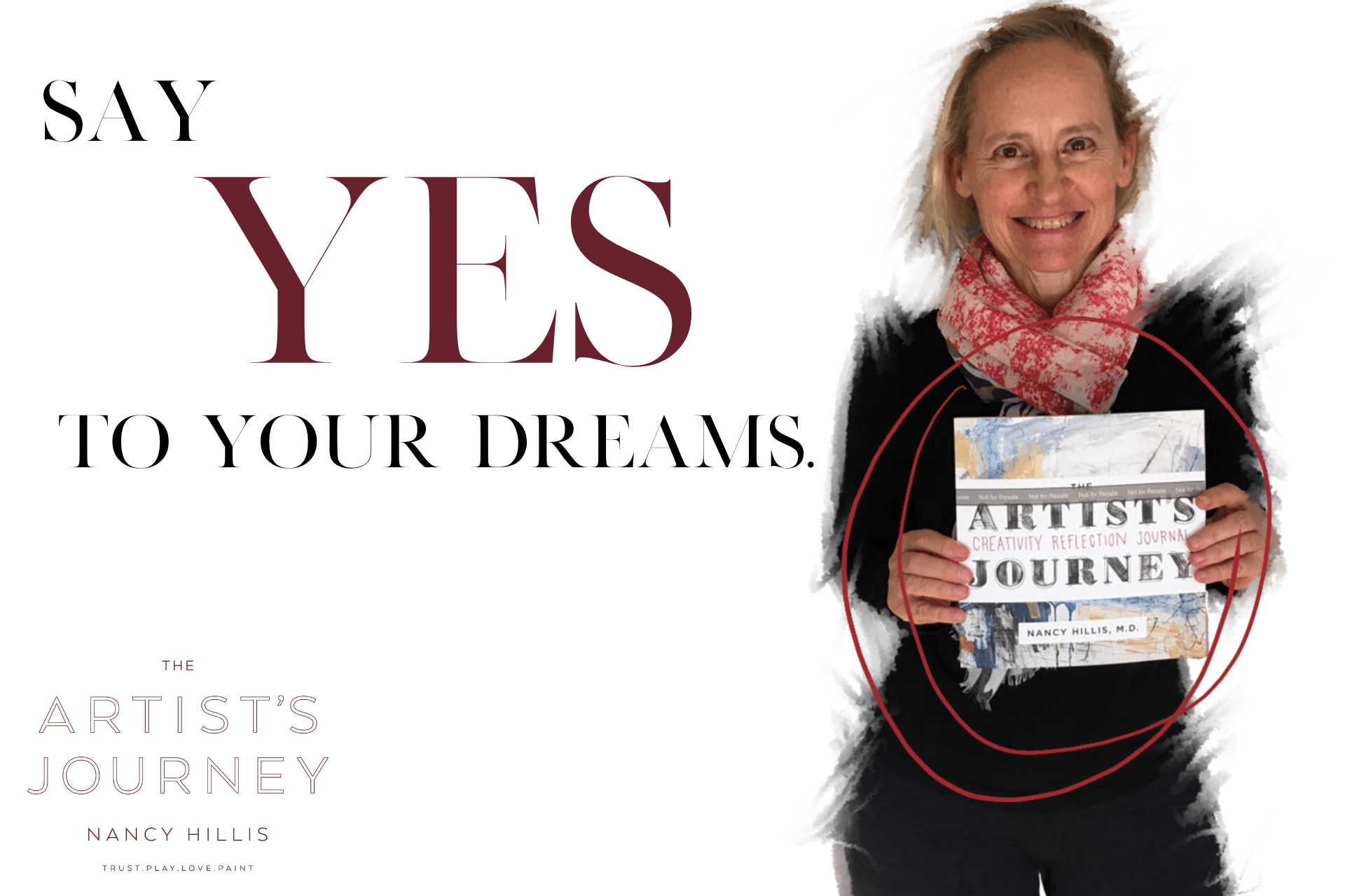 This self-help journal sparks your imagination with prompts, poetic musings and stories inviting you to reflect on and activate the inner sources of your creativity

Will you say yes to your dreams? Let me know in the comments below. 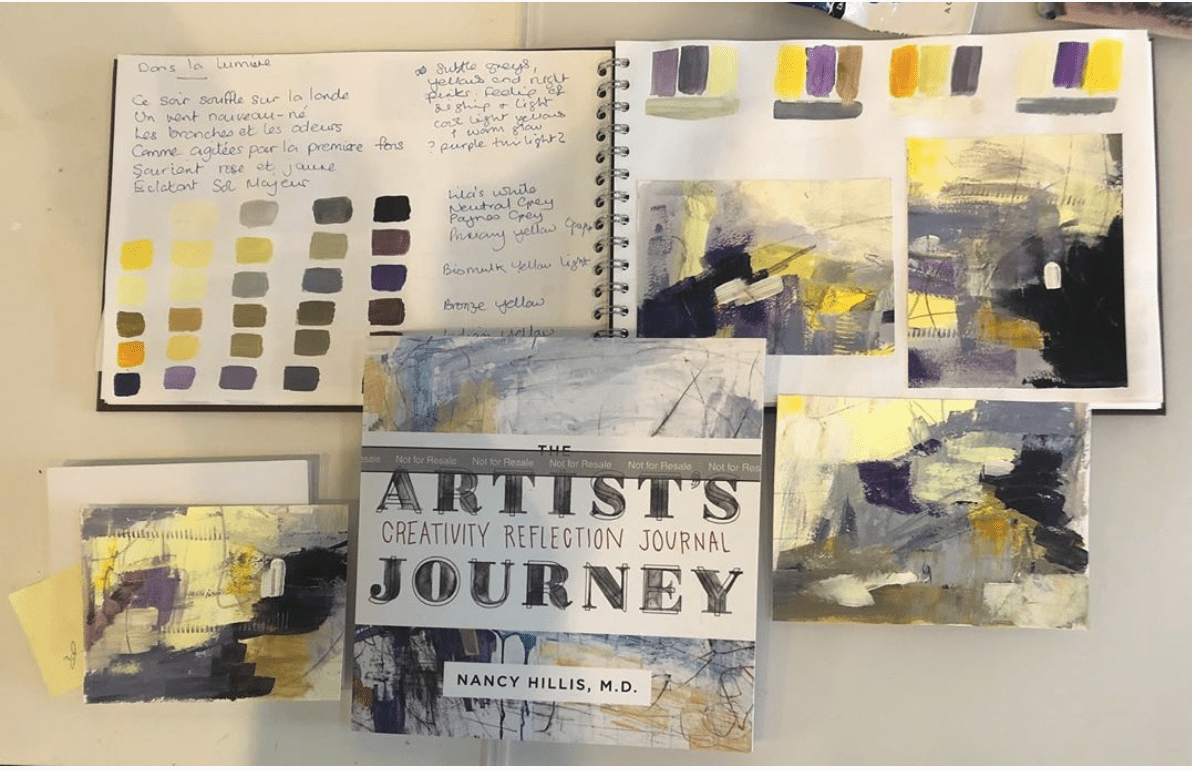 “Exciting new book from the amazing Nancy Hillis. The Artist’s Journey Creativity Reflection Journal. I was lucky enough to get a sneak preview pre publication at The Artist’s Journey Retreat in October. Here it is in action alongside my sketchbook preparing for a new project. It’s available on Amazon” – Lorraine Willis, Artist 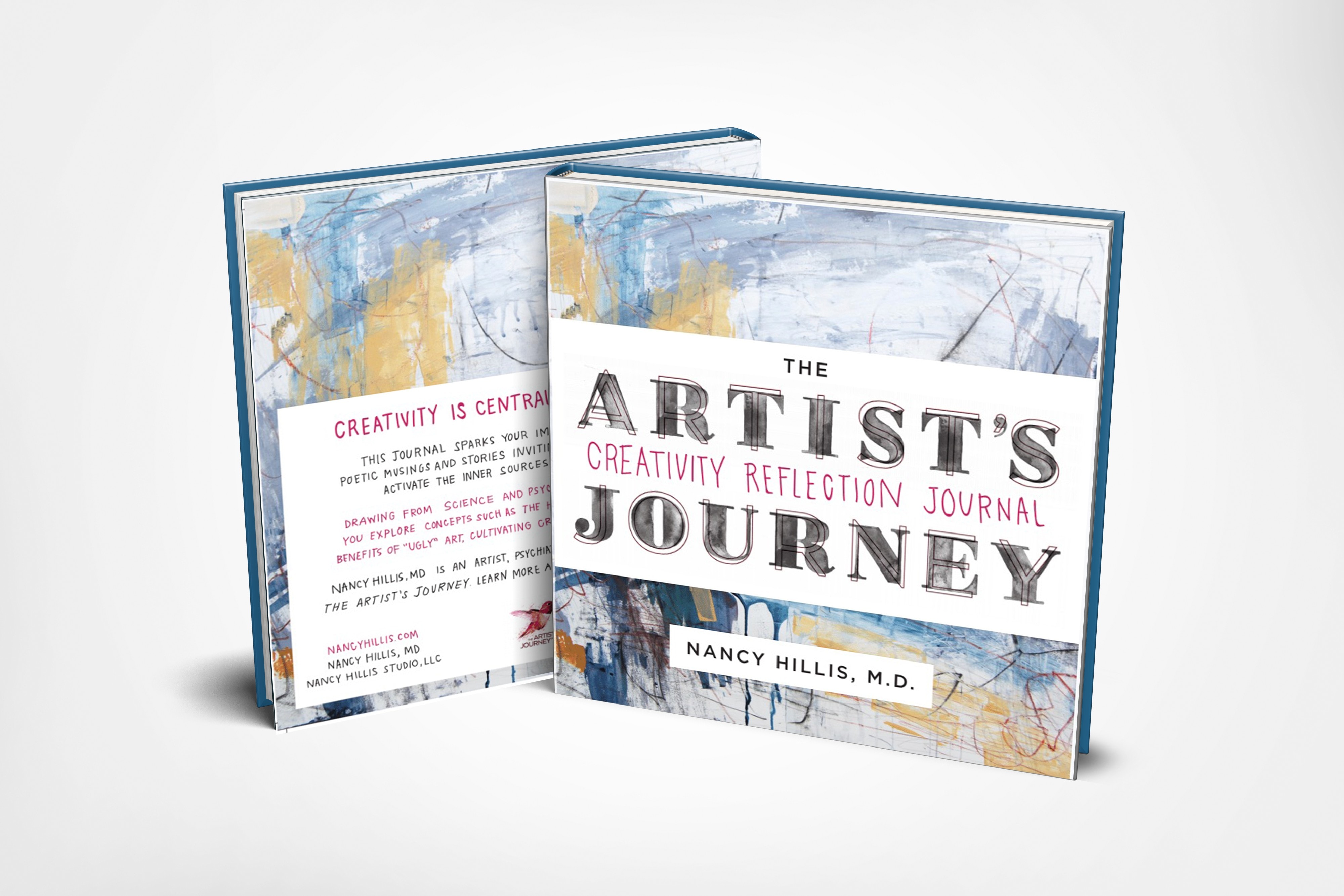 P.S. If you order my new book, you’ll receive my new Creativity Immersion Program for free in mid February. Learn more at https://nancyhillis.com/bigcreativity.