Creativity, Mistakes, and the Unknown Unknown 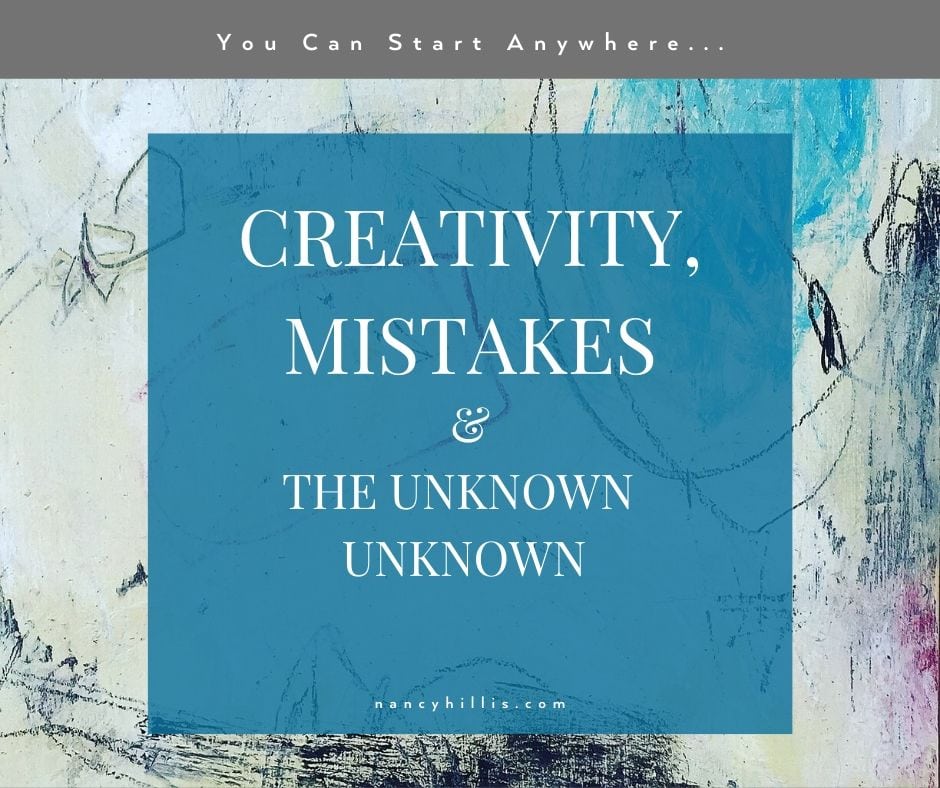 Creativity, Mistakes, and the Unknown Unknown

What is a mistake?

We think of a mistake as a waste, an existential tax on the living of life, something that points out our imperfections as humans.

It literally means than we mistook, we interpreted or took something wrongly. A failure of understanding.

Mistakes are the hobgoblins of artists of all stripes.

Why did I put that brushstroke there? Why did I use that chord in the song?

It seems that if you worked mindfully enough, you could avoid mistakes entirely.

In an earlier blog post on life, death and the nature of creativity in the time of COVID-19, we talked about both friction and death being rude and perhaps unnecessary accompaniments to life. Things that make our world dented and tarnished compared to a Platonic ideal world that we occasionally get glimpses of.

But in that same post, we argued that what seems like a curse has a large component of blessing contained within. In a world without friction, nothing put together stays together. Whatever is constructed deconstructs. The center doesn’t hold. Nothing can ever become complex.

In a world without death, nothing changes or evolves, no learning happens, it’s Groundhog Day forever.

Maybe they’re essential to the unfolding of life and creativity.

What does that even mean, since mistake implies comprehension and intent?

It turns out Nature does indeed make mistakes.

When living things have offspring, the offspring inherit copies of the parents’ DNA. Two things happen in this process.

In sexual reproduction, there is mixing of components of the DNA from each parent. But there is also a second process- the process of mutation. Mutation is imperfect copying of genetic information- it looks like mistakes! It’s very subtle-it is glacially slow and sporadic.

This combination of mixing and mutation drives the evolution of a species. It is a kind of slow search of an enormous realm of possibilities.

But it does not occur in isolation. All the other species in the world are doing exactly the same thing!

Each species sees its environment change because everybody is playing a gigantic game of rochambeau (rock-paper-scissors) simultaneously.

But it’s a very unusual game of rochambeau– both the playing pieces and the rules are changing underfoot depending on the actions of the players!

Wouldn’t it seem that mixing alone is enough without mutation? Genes encode traits (blue eyes, long fingers, dimples) and there is an enormous number of possible combinations when two parents combine their genes.

The chances of getting an exact copy (other than twins, which is a different process) is vanishingly small, so that should generate enough originality through combinatorics.

Mutation is a secret weapon that supercharges our ability to adapt to the shifting sands of our existence. It’s a kind of Hail Mary move. It has a low probability of success but if you win, you win big.

Mutations allow the emergence of new forms and categories of attributes that explore the adjacent possible.

But Nature is subtle and mysterious, continually unfolding new truths to the seeker.

There’s no end to the mystery of life. As one question is answered, another one appears in its place.

Refined and sophisticated is the Lord, but malicious he is not.

It is one thing to combine known ingredients- genes that do certain things when expressed in an organism such that we get organisms that are made of familiar aspects in unfamiliar combinations.

But how do we get truly new traits that have never been seen before? How did we emerge from a world without eyes to a world with eyes? Where do new categories come from?

It is possible to say something about the Unknown because we know it will be made from a familiar list of ingredients. A child’s eyes may be blue or hazel or green or brown or black or violet, but they are going to be eyes.

When we address the Unknown, we know that there is something we don’t know- exactly how an organism will look.

But the Unknown Unknown is a different beast all together.

By making DNA errors, new categories can emerge where there was nothing before.

The categories of feet and wings and claws do not prepare one for eyes in advance.

In a previous blog post about Yogi Berra and other famous philosophers, we talked about categories of things, in this case actions of calling balls and strikes in the game of baseball.

The first umpire said, “I call ’em like they is.”

The third umpire said: “They ain’t nothin’ until I call ‘em.”

The Unknown Unknown is akin to “They ain’t nothin’ until I call ‘em.”

It’s the realm of emergent categories.

Mutations are a way of feeling our way into a new reality.

In Nature at least, most mutations don’t work- they are deleterious, which is a disaster for the organism possessing that mutation.

But, once in a while a mutation sticks around, like blue eyes appearing in humans between 6000 to 10,000 years ago.

Mutations address the deepest part of the Adjacent Possible.

There is no action short of taking the step that will determine whether or not it was a step worth taking, because it has to do with the interactions with the rest of the environment.

It is inherently risky.

In the world of creativity, we are not risking our corporeal lives with each act of creation. It is not life or death, though at times it can feel like it.

Rather, we are risking time, resources and the possibility of inner and outer rejection, criticism and judgment. We are risking failed creations and “ugly” art, but we will live to paint, write, play, compose and dance another day.

As the philosopher of science Karl Popper said about scientists,

Scientists try to eliminate their false theories, they try to let them die in their stead.

Creatives let some of their mistakes die in their stead.

What Popper didn’t state (perhaps it was too obvious) was that both scientists and creatives need to be constructing lots of theories and creations, and that making and learning from mistakes is an essential part of the process.

In the world of the Unknown Unknown, we don’t know if a mistake was really a mistake.

This brings to mind an old story.

The Parable of the Chinese Farmer

There was a poor Chinese farmer who worked on his land with his son and their horse.

One day, the horse ran away and the neighbors said: “How unfortunate you are”

One day, the horse reappeared, along with a herd of horses. The neighbors exclaimed in awe: “How lucky you are!”

One day, the son was taming a horse in the herd when he fell off the horse and broke his leg. He could no longer help his father on the farm. The neighbors cried: “How unlucky for you”.

Soon, a neighboring band of marauders threatened the village. Young men were sent off to fight the invaders and many were injured or died. The farmer’s son had been unable to join them due to his broken leg. Villagers said to the farmer: “How fortunate you are that your son couldn’t fight!”

And the farmer replied, “Maybe so, maybe not”.

P.S. If you’re feeling cooped up, creatively stuck and restless…this is the TIME to create.

Why is this the time?

TS Eliot wrote in The Wasteland

April is the cruelest month.

Perhaps he wrote that because in the northern hemisphere, April stands at the intersection between warmth and light and dark and stormy…

April giveth and it taketh away….

Well let’s turn that on its head and make it more like Chaucer’s opening prologue of The Canterbury Tales:

When April the sweet showers fall and pierce the drought of March to the root….

For Anyone who completes this challenge, I’m awarding COVID scholarships valued at $200 off for our foundational courses (The Artist’s Journey® and Studio Journey) and 20% off any other courses which will end on April 30th. Find out more by joining the challenge. 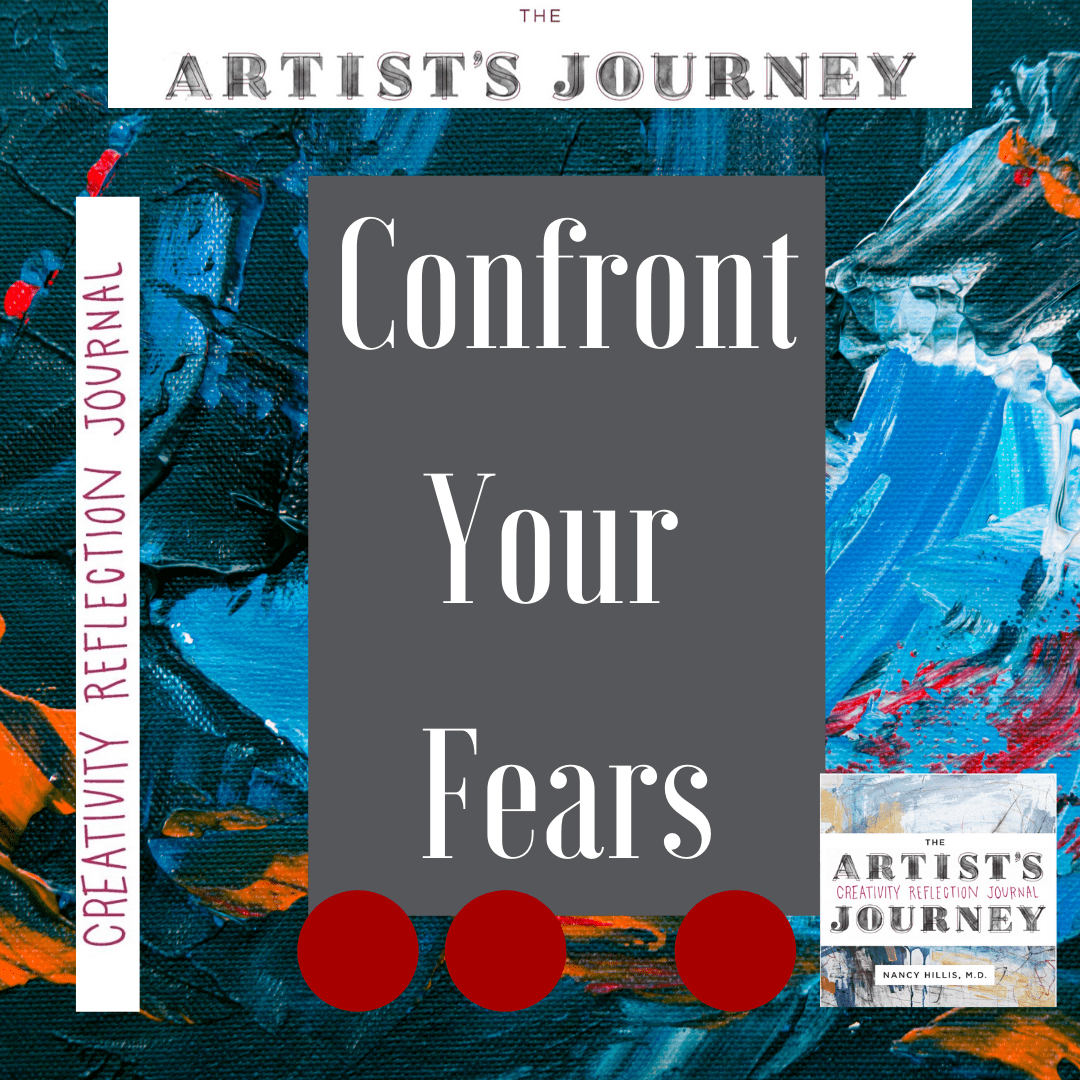 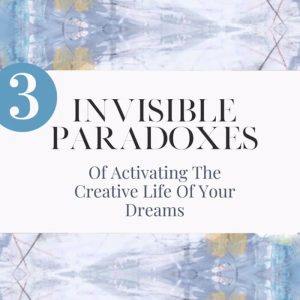 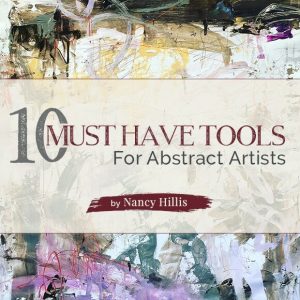