The Future As Past: The Paradoxical Nature Of Creativity 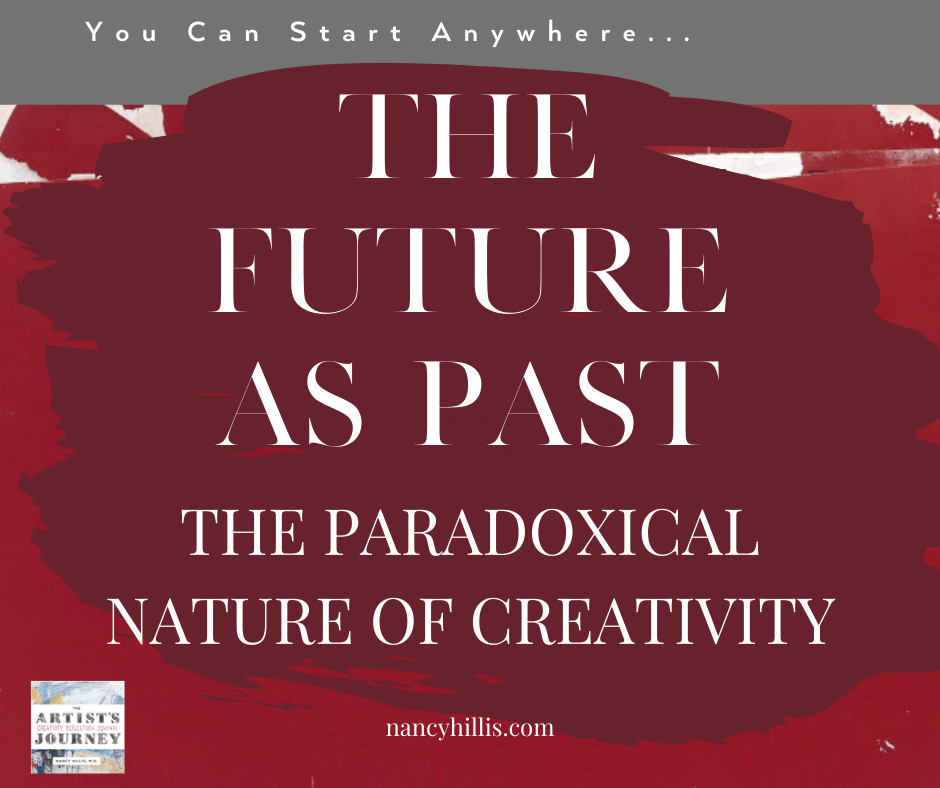 The Future As Past: The Paradoxical Nature of Creativity

What’s past is prologue

The New Year is often associated with reflection and resolution. I’ll go to the gym five times a week, I’ll read 52 books, I’ll lose 25 pounds, I’ll paint 100 paintings. Most of these resolutions melt away before the end of January.

As is often said in the advertising business, “ads don’t work but campaigns do.”

This means that a single impetus to do or change something is fragile and weak, but a repeated nudge can become a habit and strongly integrated into your life.

The famous organist of St. Sulpice in Paris in the late 1800s, Charles-Marie Widor, observed this phenomenon in a striking and unusual way. He had a small pipe organ in his apartment in Paris for practice.

He discovered experimentally that if he played the biggest and loudest chord possible, quickly and only one time, that it did not wake the neighbors.

But if he played one note on the quietest pipe and held it down for 15 minutes, the lights in the nearby windows came on one by one as people stirred and thought, “what’s that sound?”.

Changing one’s life is like a long held note

What’s a good way to develop this quiet persistence?

Having a deep-seated reason works handily, a compelling why, rather than a vague notion that, for instance, losing weight is a good idea and you need to do it right now, or perhaps tomorrow. 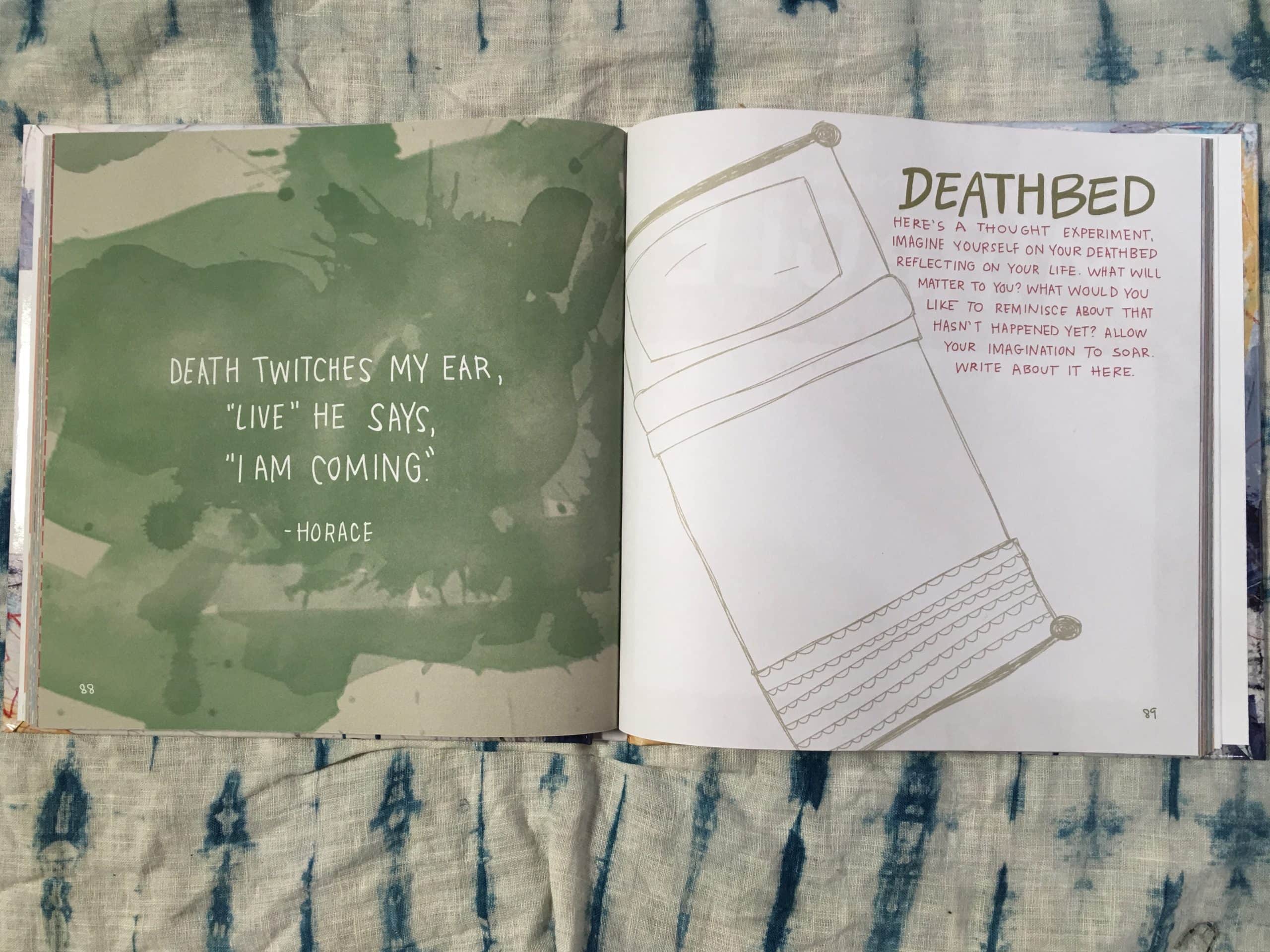 One source of deep-seated reasons is the Deathbed Experiment.

In this thought experiment, you imagine yourself on your deathbed, knowing that the end is near. You are reflecting on the highs and lows of your life. Perhaps you’re surrounded by loved ones, or even a bigger cast of characters that includes all of the people you need to say something to before your departure.

The actress Lucille Ball got at these sentiments when she said,

Hunter S. Thompson, the drug-fueled gonzo journalist of counterculture fame, said in a moment of lucidness:

Life should not be a journey to the grave with the intention of arriving safely in a pretty and well preserved body, but rather to skid in broadside in a cloud of smoke, thoroughly used up, totally worn out, and loudly proclaiming: Wow! What a Ride!

Another advantage of the Deathbed Experiment is that it turns the idea of future prediction on its head.

A saying often attributed to the Danish quantum physicist Niels Bohr encapsulates this:

Prediction is very difficult, especially about the future

And we like that, because as artists we know that the magic lives in the unknown. Embracing uncertainty, stepping into the unknown and accessing the adjacent possible is the raw material of creativity.

With your new mental exercise of the deathbed experiment you’re not trying to picture the future, you’re reviewing a past that doesn’t exist yet but treating it as if it did.

This mental exercise frees you from the formidable task of wide-open future prediction and allows you to work backwards from a future you want, rather than from all possible futures.

This reflects what we know from studies on creativity- the power of constraint. Choosing the future you want is applying constraint, which is essentially making decisions. The word decision comes from the Latin word decidere which means to cut through. It’s essential to creativity.

Within a constraint is, paradoxically, an infinity of possibilities.

By all rights this shouldn’t work, but many have said that it’s amazingly helpful.

When Niels Bohr was asked why such a famous scientist as himself kept a good luck horseshoe above his door and why he believed in such superstitious nonsense said,

You know, my friends tell me it works whether you believe in it or not 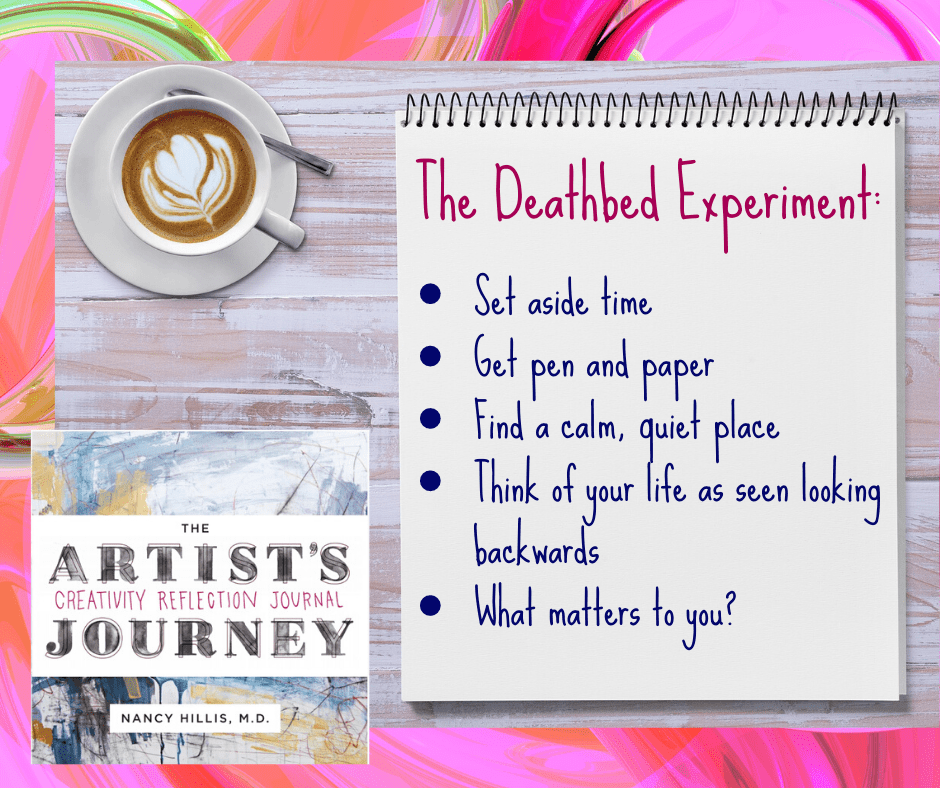 So I invite you to run the Deathbed Experiment.

Think of what you might want to say to various people, including yourself. Maybe even give the younger version of yourself advice.

How soon will we accept this opportunity to be fully alive before we die?
― Stephen Levine, A Year To Live

The Deathbed Experiment has the power to provide a deep-seated and long-lasting push in the direction you want to go.

It puts the whole weight of your as-of-yet un-lived life behind it, rather than an ephemeral sentiment that could change in days or weeks.

Abraham Lincoln has the last word here, because it applies so fittingly to the Deathbed Experiment:

The best way to predict the future is to create it.

What future will you create?

What is the dream you simply MUST say yes to?

Leave me a comment below and let me know your thoughts. 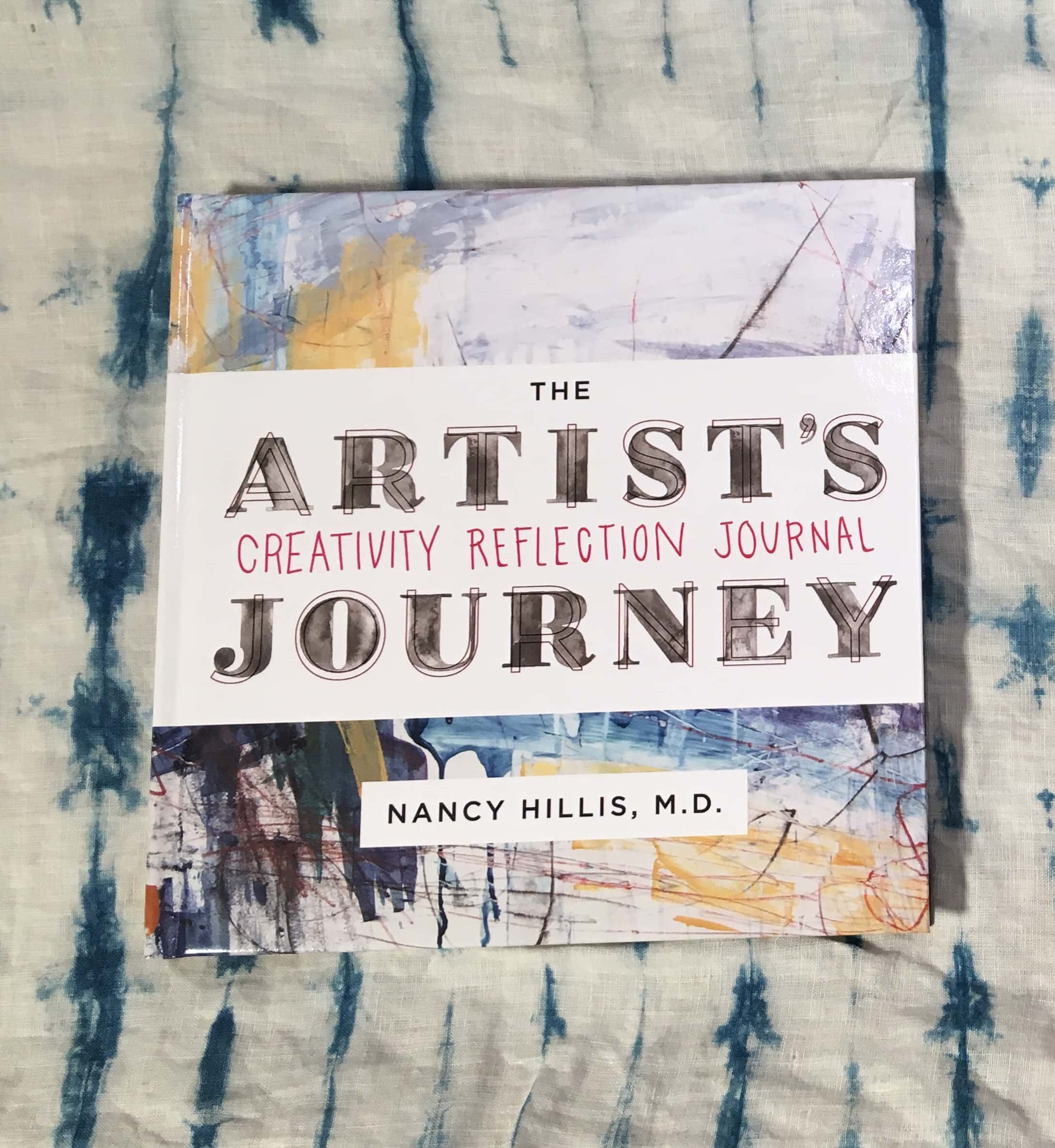 P.S. If you love my blog writings and this thought experiment in particular, you’ll love my new book The Artist’s Journey Creativity Reflection Journal which is available at Amazon, Barnes and Noble and the Book Depository.

Order the book and get in our FREE Creativity Immersion program. Go to https://www.artistsjourney.com/bigcreativity to find out more about the book and the free creativity program.

P.S.S. Watch my free webinar: 3 Paradoxes To Activating The Creative Life Of Your Dreams. Register here to see it. 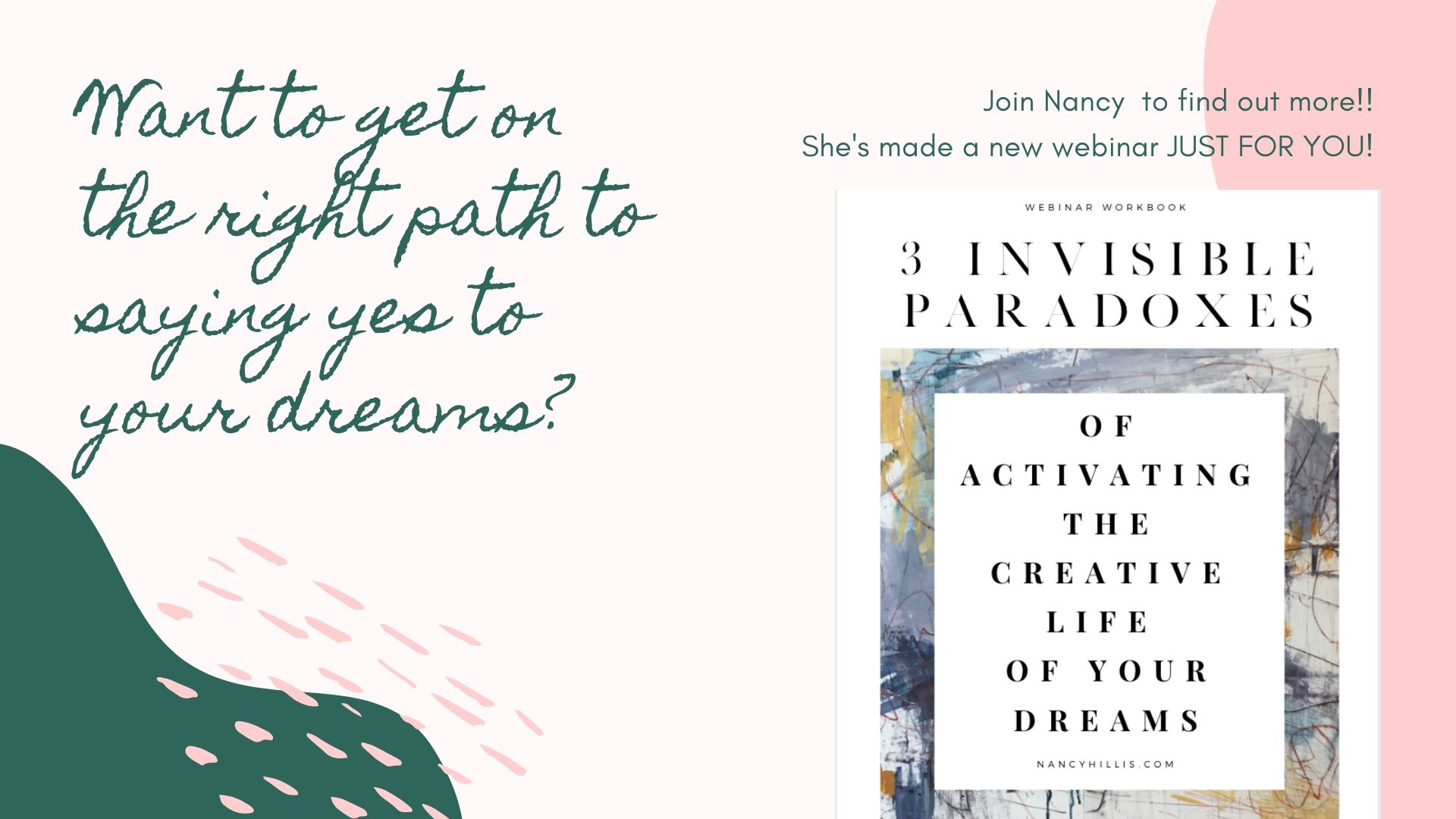 New webinar: 3 Invisible Paradoxes To Activating The Creative Life Of Your Dreams